Showing posts from October, 2015
Show all

The Lesson of the Bees 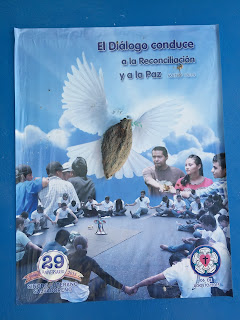 Just outside the door to the church, on the sheltered wall of a small portico, a small family of bees began to construct their nest - not on the stuccoed cement wall as one might expect, but on top of a poster which is securely taped to the wall. If this happened outside of your church door or on the porch of your home, what would you do?  I probably would have spritzed the little mud daubs with a bit of vinegar (thus ruining the poster) or perhaps would have pulled the poster off of the wall to discourage the bees from building in that spot (thus ruining the poster).  After all, no one wishes to have bees buzzing about near a well-used entry way.  Right? Daniel never considered impeding the work of the bees.  Instead, each Sunday morning before worship he snaps a few photos to capture the progress of the construction project.  As he has observed the progress, Daniel noticed something quite remarkable. The poster on which the bees are building their home is the theme poster for t
1 comment
Read more

October 12, 2015
Today is Columbus Day ... in El Salvador. Bishop Gomez concluded today's weekly devotion, and he said this:   "Gracias a Dios por este dia - el 12 de octubre, el dia de Cristobal Colon." Thanks be to God for Columbus Day.  This statement was a little bit unexpected.  Back in the United States, Christopher Columbus has fallen out of fashion, or at least slipped off of the pedestal on which he stood back when I was a kid learning history. "On this day," the Bishop continued, "the destiny of our country was changed...forever.  People ask, 'Why is our country so violent?'  Some say that the Indians were violent.  Some say that the Spaniards were violent.  The reality is that some people are violent.  It is an illness.  Something is wrong in the minds of people who commit terrible acts of violence.  To kill, one must be ill, and to chop up a body and dishonor another human by scattering the parts after killing - that act can only be carried out by
Post a Comment
Read more
More posts