Showing posts from February, 2018
Show all 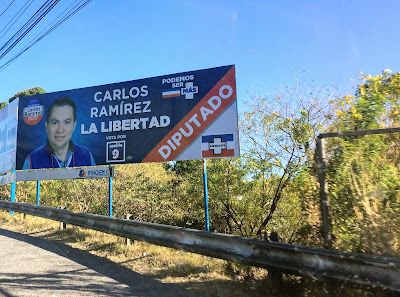 In one week, Salvadorans will go to the polls to elect their representatives (deputies) of the National Assembly, as well as mayors and city council members.  Campaigns will continue through Wednesday, after which candidates are not allowed to campaign, .and voting takes place on Sunday.   Over the past month, campaign volunteers have been fast and furious in taking down propaganda from the opposition and installing their own.  In the old days, campaigners armed with cans of paint and brushes would transform light poles, curbs, and guardrails from one party color to another, creating new streetscapes overnight!  Paint is no longer allowed, nor are posters pasted up on walls or light poles.  Billboards are allowed and seem to be rented by the week as the images change from one party to another frequently, providing steady income to the advertising companies.  Flags are also allowed (which I personally find very fun), as are stiff posters mounted on light poles and free-standing ban
Post a Comment
Read more 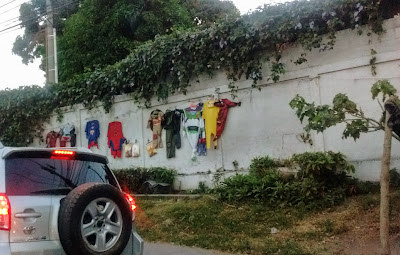 Every now and then I spend a few days with my phone in hand, snapping pictures of the scenes as they go past the car windows.  Here are a few moments from the first two months of 2018... New Year = New selections at the Super-Hero-Pajamas Corner The San Salvador volcano is in our daily view... we noticed the installation of a small shrine at the edge of the sugar cane field and were told it is the beginning of a new housing development planned by the Catholic Church. Paper beats rock. Rock beats scissors. Cow beats semi. The tree shadow caught my attention in this photo, with the twin peaks of San Vicente in the background. Saddled up for a ride. Bus driver gets out, helps woman unload her huge sacks of produce...this is how fresh stuff gets out to the small towns far away from the capital city. Rivers run low at this time of year. Empanadas and coconuts.  Really, just about everything is available at a roadside stand somewhere. San Migu
Post a Comment
Read more 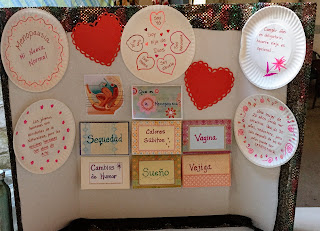 My charla is flashy. Hot flashy. In my charla we talk about menopause.  But this story is not really about my charla; it is about the great-grandmas who come to my charla.  Hot flashes left them years ago, but the older ladies love to come to my charla anyway.  They sometimes wait in line to come.  As soon as the seats are free, they sit down and smooth their aprons. I introduce myself and tell them that my charla is about menopause.  They grin a little and wag a finger at me, gently saying " Ya pasó." (It's already passed.)  It's OK, I assure them, there are plenty of things that happen after menopause.  Of course they agree. The post-menopausal women with lined faces, gray hair, flowered dresses, ruffly aprons and twinkly eyes tell me that they come because there is always something to learn.  They bring daughters, granddaughters and friends.  They often travel in pairs.  They nod.  They smile.  They listen.  They ask questions.  The young women watch them.
Post a Comment
Read more

February 03, 2018
As part of our annual Mission of Healing Family Wellness Fairs next week, we will be distributing Days for Girls washable feminine hygiene kits.  The kits will be given to girls ages 9 to 18 as part of a teaching charla  (chat) about menstruation. Earlier this month, as pastors and leaders gathered to plan for this year's fairs, we shared an animated and difficult conversation about sex education and the realities of life for many girls in El Salvador.  One pastor had experienced some negative aftermath following a Mission of Healing Family Wellness Fair in her community two years ago.  A nearby school had sent groups of students in 7th through 9th grade to the fair with their teachers.  The students participated in the sex education charla, and as part of the charla observed the proper technique for placing a condom over a rather large wooden penis.  (This is an education charla which is done by health promoters from the church, and has been done across the country with youth gr
Post a Comment
Read more
More posts