Showing posts from March, 2019
Show all

This very morning, church leaders, water protection advocates, citizens and journalists are gathering in the Valley of the Angel.  This is the valley to the north of San Salvador, to the south of Apopa, and from which, on a clear day, one can see the surrounding circle of volcanoes, from El Boquerón (San Salvador), to the hills of Nejapa, to the ancient volcano of Guazapa, to the hills of Chalatenango, to the twin peaks of San Vicente.  At one time, this was forest.  Long ago, people recognized that this large inland plain with rich water resources was suitable for agriculture.  For a long, long time, sugar cane has grown in the valley. With the construction of the San Salvador bypass, the valley opened up to traffic, especially truck traffic.  Small roadside stands popped up, as did gas stations.  A large customs depot for land transport and unsightly truck corral followed.  Nearby businesses, especially the famous Coca Cola, began extracting huge quantities of water from the aquife
Post a Comment
Read more 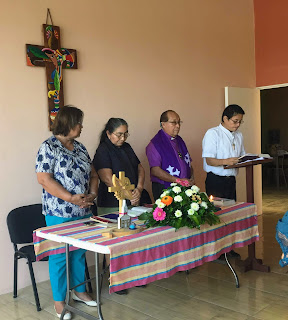 News of the plane crash in Ethiopia reached El Salvador quickly.  Within 24 hours of the crash, the Salvadoran Lutheran Church organized a memorial service to honor the lives of those who perished and to pray for their families.  The memorial was particularly dedicated to Pastor Norma Tendis, a husband, father, and Lutheran pastor who served the Lutheran Church of St. Ruprecht and Einode in Austria and worked as a consultant to to the Economy of Life program of the World Council of Churches.  Pastor Tendis was en route to Nairobi for the United Nations Assembly on the Environment when he and 156 others were killed in the crash.  The memorial service in El Salvador was attended by more than 50 people, including Salvadoran leaders with ACT (Action by Churches Together),  the Lutheran World Federation, local faith leaders in the Salvadoran ecumenical family and visiting members of the ELCA (Evangelical Lutheran Church in America). The Salvadoran Lutheran Church is dedicated to advoca
Post a Comment
Read more 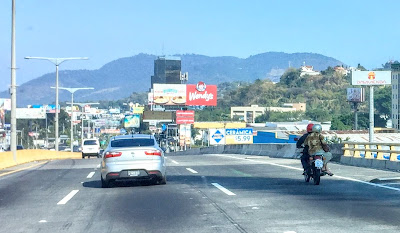 If you are on social media, the acronym SMH is no doubt familiar to you:  Shake My Head.  It is appropriate to place SMH on a post or in a comment to indicate that the subject matter of the post (be it the situation, the behavior, the conversation) is ridiculous, foolish, and perhaps there are no fit words other than "Huh?" or "Why? (with attitude)" to describe one's reaction to the topic at hand.  I think SMH might also be well used as an acronym for Scratch My Head, at moments when one's reaction is just one of confused curiosity.  Sometimes in El Salvador, I just shake my head (SMH) or maybe SMC (sacudo mi cabeza). SMH #1:  Women Riding Side-Saddle on Motorcycles which are Careening down a Busy Street OK, so mounting a motor-cycle while wearing a pencil skirt is definitely not a modest moment for a cyclist's mom or grandmother, but seriously, riding sideways cannot be safe!  Weaving in and out of traffic with Grandma barely hanging on to the driver
2 comments
Read more
More posts