Showing posts from March, 2021
Show all

Celebrating 25 Years in the Struggle to be a Community 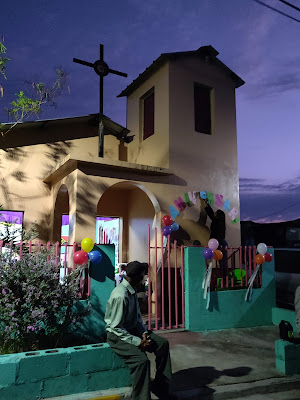 On March 24, 1996, an organized group of homeless families marched up the hill to plant a cross, to plant a church, to plant their roots as a new community.  This action was taken just four years after the end of a 12-year civil war. The negotiated Peace Accords, signed in 1992, called on the newly formed government to facilitate Land Reform.  Community organizers, like those in the Lutheran Church, worked with refugees and homeless families, to help them find places to live. Just enough light before sunrise to put up the sign: Aniversario 25   "We came walking from Tonacatepeque. We entered by the way where the school is now, we climbed up this hill, and that cross of iron that is up there, we planted it here on this little corner, on this mound of rock. We imbedded it in concrete.  And it stood there for 12 years, because the church was a little church for 12 years, and it was made of laminate, because as long as the people lived in little houses made of laminate, the church wan
Post a Comment
Read more

"This morning, I went out to help before dawn...with a group of people at the ready to extinguish flames on the Mountain. Near la Manantial [the spring] - you know the place. It was a very good adventure. It made me feel useful as a person of the planet... "Some drunk youth on a motorcycle caused the fire... "I gave my opinion that we needed firefighters and the armed forces, but they did not want to come. I don't know why. In reality they have all the tools. I don't understand why that is... "In the end, they arrived after a lot of pressure from politicians. The armed forces, the firefighters, civil protection and citizens worked together..." A week ago, I messaged the young nurse to see how she was doing with her recovery from COVID-19. I was not expecting to receive news of a fire. She assured me she felt much better (she was quite sick for about 4 days, and 10 days in quarantine). I asked her if she was sure her lungs were ready to fight a fire.  Sh
Post a Comment
Read more

Partnering During A Pandemic: Back to School, Sort Of 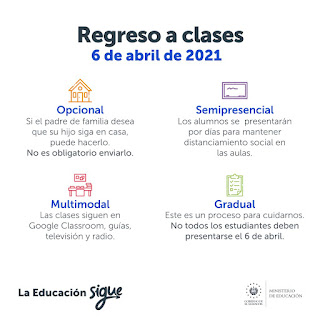 After more than a year of completely shuttered classrooms and parents facilitating their children's education at home, the Salvadoran Ministry of Education has announced that schools will begin to re-open after the Holy Week holidays. Ministry of Education Graphic posted on social media Return to classes + April 6, 2021 Optional:  If the parent in the family decides that the child should stay home, they can do that. It is not obligatory to send them. Semi-in-Person:  The students will be present on [specified] days in order to maintain social distancing in the classrooms. Mult-modal:  Classes continue in Google Classroom, with guides, television and radio. Gradual:  This is a process to care for ourselves.  Not all students should be present on April 6th. What will the re-opening of schools look like? The Salvadoran government has established detailed criteria under which the schools may open.  It is likely that not all schools will be ready to open on April 6th, especially some of
Post a Comment
Read more 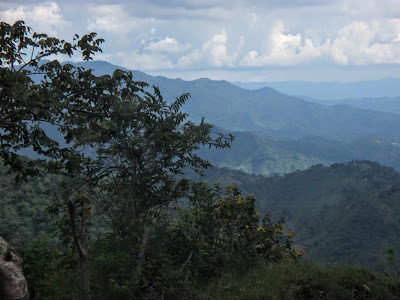 Destination #4 on our Pandemic Virtual Tour of El Salvador:  Dulce Nombre de María Welcome to the mountains of Chalatenango At the time, we were overwhelmed - quite overwhelmed.  In our quest to learn as much as we could about the Salvadoran public healthcare system, we traveled every day for a month by car and and by truck, we climbed up volcanoes and trudged through ravines, we were welcomed into exam rooms, pharmacies, labs and lunchrooms in big clinics and small outposts, we weighed babies and comforted elders, we combated zancudos (mosquitoes), and we were blown away by the enormous work load which public health doctors, nurses and health promoters complete, day in and day out.  This story is not about the work we witnessed or the tiny work we did.  This story is about a day of fun we had in the midst of the work.  And as I think about telling the tale of a misty day spent in a beautiful place named Dulce Nombre de María (Sweet Name of Mary),  I cannot proceed without expressing g
Post a Comment
Read more
More posts