March 04, 2021
For the last several election seasons, I have been able to both observe the pre-election campaigns and the inner workings at polling sites on election day.  This year, due to the pandemic, my observation experience was limited to what I could observe while driving around and what I could observe while following live streaming reports from other observers.
Car Window with a View
On February 27th, the day before the election, we took a drive around San Salvador to check out the set-up process for the voter information tents and polling sites.  We specifically headed to places we had visited prior to the 2019 election so we could do a comparison.
So, just a refresher:  Nayib Bukele was voted in as President of El Salvador in the 2019 election.  His party, Nuevas Ideas (New Ideas) was not allowed on the ballot because it was too new.  Bukele struck a deal with GANA and ran as the GANA candidate.  GANA, formerly covering the country with its orange and dark blue colors, took on the celeste (light blue) color with a white swallow image on the flag.  Because Nuevas Ideas was a new party, it had no members in the legislative assembly.  For his first 2 years in office, Bukele has had to work with the GANA deputies or build coalitions in the legislature, and rule by executive order.
Taking a look back, here are a few 2019 photos from the area in San Salvador near the former fair grounds and Guzman museum.

And here are some 2021 photos from the same area: 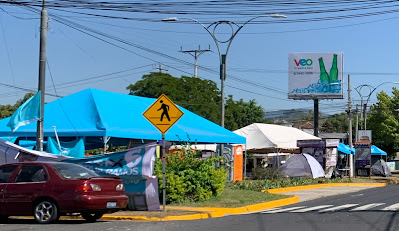 The question we asked ourselves:  Where is the FMLN?  Even ARENA
seems to have given up, in a part of town where that seems
fairly odd.
Over the last month, I have captured a random assortment of photos which illustrate the 2021 pre-election landscape.  Overall, the ground campaign seemed a little lack-luster. (Social media and the radio are another story.)  Granted, in the midst of a pandemic, there were no big rallies and no campaign buses hauling supporters waving flags.  Granted, the 2021 election did not include a presidential race on the ballot.  Yet, the possibility of Nuevas Ideas solidifying single party rule made the races for deputies in the Assembly seriously important.  Mayor elections impact every aspect of infrastructure and service at the local level, and generally really matter to voters.

Election Day View:  The Computer Screen
On election day, I spent a lot of time watching the live stream put together by FECLAI (a consortium of mainline protestant churches in Central America which has sponsored election observers since the war and with whom I have observed past elections).  Using a nifty system of online reporting and live video reports from about 70 trained observers (mostly Salvadoran, mostly observing in the areas where they live), I had a great vantage point from which to type English commentary for international partners who were following the elections from their homes.  Most of the remote followers have a history of serving as election observers.  A large contingent of national and international observers gives great transparency to the electoral process.
There were a few glitches with the openings, mostly related to the rules regarding the role of Nuevas Ideas party nominations for those seated and the voting tables.  It's a little dull to go into the minutia of this issue.  The main thing to note is glitches were resolved, and by the end of the day, a couple of slightly more serious issues at one or two voting sites were resolved to the satisfaction of those present.  This is a real positive of the Salvadoran voting system:  it might be a little messy with disagreements, but with observers from each party and citizen participants and human rights representatives and observers watching (but not interfering), sticky stuff gets worked out.
Late into the night, the voting table secretaries entered the results into on site computers.
In the end, Nuevas Ideas swept across the land, winning a majority (NI candidates plus coalition candidates) in the Assembly and dominating the landscape at the mayoral level.  What does this mean for El Salvador?  Good question.
To read a preliminary analysis of the 2021 elections, check out this story in El Salvador Perspectives.
To read about a a few previous election observation experiences...
Observations from the 2019 Presidential Election
The Voting Experience
Cardboard and Tape
Crayons and Paper
Current Events Just Click Pandemic Politics