March 07, 2018
I am planning to write a series of stories about the recent elections in El Salvador.  This first story will describe the experience of the typical voting family at the voting center in which I was stationed.  It is written from the perspective of a female voter with her family. It includes actual and accurate observations which my colleague and I made during the hours between 6:30 AM to 11 AM and 2:30 PM to 11:45 PM at one voting site. 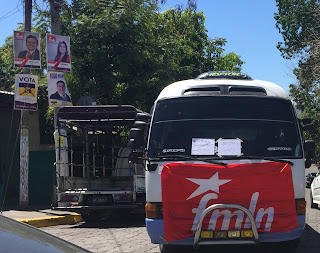 I vote at the school which is several blocks from my home.  The ARENA party came around with their micro-bus to offer us a ride.  The FMLN followed shortly behind with a big coaster.  The rides were free, but my family members don't really see eye to eye on politics, so a friend drove us over in his truck.  We hopped out of the truck about a block away from the school because the police had put up cones in front of the school to block traffic.  Nearby I saw a family a lot like my own - the mom, the dad, a couple of kids and a grandma.  They climbed out of an ARENA micro.  "Vote for ARENA!" the driver joked with the kids.  That family walked toward the ARENA orientation tent.  We walked directly to the school. 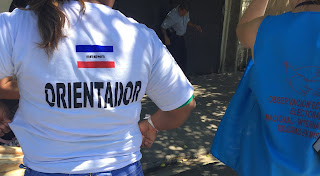 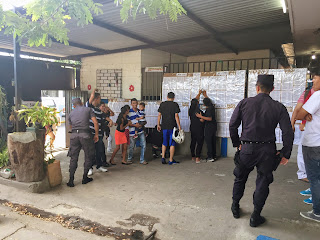 The big black gate to the school was closed, and we could see that the police were letting the voters in through the smaller door.  There were a few officers outside, chatting with the people and keeping the cars away.  We entered and one of the officers asked to see inside the diaper bag I was carrying with my stuff and things for my little one.  They pulled my husband aside and patted him down a bit.  They didn't ask anything of my mom or my son. 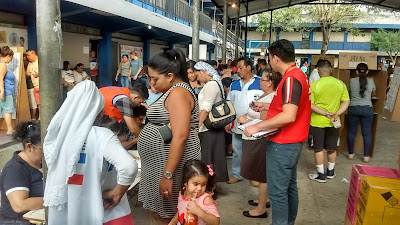 We weren't really sure which tables we were supposed to go to.  We looked at the big lists on the wall, but it was dark and hard to read the small print.  An elections tribunal worker helped my mom to find her spot.  The vigilantes (party observers) from the ARENA and FMLN parties came quickly to try to help us.  I think they were in a little bit of a competition to see who could help us first.  I noticed that many people had little tickets with their table numbers and voter numbers written on them.  The vigilantes told us that those were from the different political parties' orientation tents, but they had smart phones and were able to look up our table numbers right there. 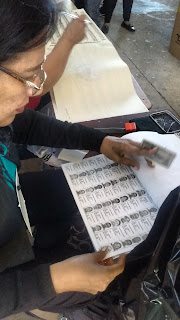 My husband took our little boy with him, I had our daughter with me, and a vigilante helped my mom to get to her table.  We were at three different tables because they are organized alphabetically and we have different last names.  Well, that is our culture, but it makes it tricky.  I had to wait a little bit in my line, but my husband and mom didn't have to wait.  They voted in classrooms, but I was on the covered playground.  It was really hot. 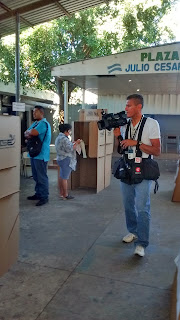 When it was my turn, I handed my DUI (identification card) to the first person, and she found my name and photo in the list.  600 people are listed at each voting table, and as I looked at the pages of the voter list, it looked like only a few voters were crossed off on each page.  The next person at the table signed the back of my ballots, tore the corners off, and handed them to me along with a thick  black crayon.  The FMLN vigilante showed me which cardboard voting booth to go to.  I had to wait for a man to finish before I could go.  There was a reporter with a video camera walking around and filming people while they were voting.  That made me a little uncomfortable.  When it was my turn to vote, I made my choices by marking a black X over the faces of the candidates.  It was a little hard to see who I was voting for because the pictures were so small!  Then I folded my ballots and put them into the cardboard voting boxes.  The yellow ballot went into the yellow box, and the pink one into the pink box.  I went back to the table, signed my name, got my DUI back and then they dunked my finger in permanent ink (to show I had voted). 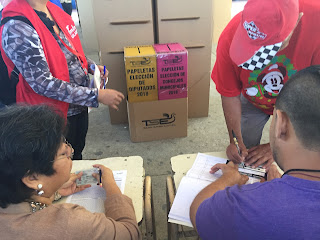 I walked out to the sunny part of the playground where there were no voting tables.  There were 8 or 9 police officers standing there.  They looked tired.  One tall officer came over and squatted down to say hi to my little girl.  The rest of my family joined us.  My son was pretty excited because he had watched his daddy vote and helped to put the ballots in the boxes.  I think that was a good learning experience for him.  My husband said a gringa in a blue vest took his picture.  Everyone in the room said it was important to share the picture as a message to parents to teach their children to be responsible citizens. 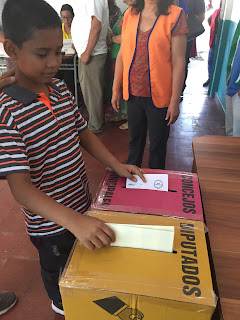 Our little girl had to use the bathroom before we left to go home.  All the doors and toilets in the restroom were broken, and it was very dirty and smelly in there.  I don't think the students should have those kinds of conditions in their school.

After we left the school, we could hear loud singing.  The ARENA orientation tent had nothing more than workers with laptop computers.  The FMLN tent had a guy on a microphone telling people to come vote.  Where was the signing coming from?  We walked toward our ride and the singing got louder.  We saw two gringas in blue vests walking that way too.  Hahaha, the woman from the evangelical church had set up her keyboard and microphone along the sidewalk on an empty patch of dirt and was singing very loudly!  There weren't too many people listening to her.

Later in the evening, we listened to the news and learned that voter turnout was pretty low.  We also learned that there were a pretty large number of null votes cast.  Well, the people had something to say about our politicians, I guess.