Showing posts from November, 2017
Show all

It's More than a Scholarship Program

November 30, 2017
When Salvadoran pastors are asked what a sister church might bring to a companion relationship, one of the most often stated responses is:  A Scholarship Program.  I am a teacher.  I believe that investments in education are valuable and life-changing.  In my work with the Salvadoran Lutheran Church, I am asked to help sort out scholarship program messes and challenges on a regular basis - both on the Salvadoran end and on the US end.  Setting up and sustaining a healthy scholarship program has its challenges. Challenges aside, scholarship programs can dramatically change the lives of children and youth.  The best ones are holistic in nature and provide students and their families with all kinds of opportunities for learning, fellowship, community service, and spiritual growth along with the economic support for those who need it in order to be able to go to school.  The best ones help little ones and their families build the habit of good school attendance and commitment to educat
Post a Comment
Read more

El Salvador: The Land of Volcanoes 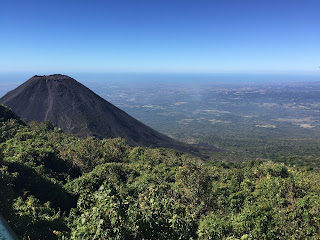 As you fly into El Salvador's international airport, you can easily see why El Salvador is called land of volcanoes.  Located within the Ring of Fire which surrounds the Pacific basin, El Salvador is home to the Corridor of Apaneca - a line of 20 to 25 volcanoes (depending on how you count them).  From steep slopes to farms to villages to cities, the topography of the land shapes the life of the people.  One of the best places to explore the beauty and to understand the power of El Salvador's volcanoes is El Parque Nacional Los Volcanes (Volcano National Park).   Just an hour away from the capital city of San Salvador, Volcano National Park allows the visitor to access three volcanoes:  Izalco, Cerro Verde and the Santa Ana Volcano, or Ilamatepec  (Hill of the Old Woman) . Izalco Volcano from Cerro Verde Izalco  is the youngest of the three volcanoes, having formed in 1770 from a sulphur-spewing hole in the earth.  For many years it was known as the Lighthouse of the Pa
Post a Comment
Read more

The Right to Water 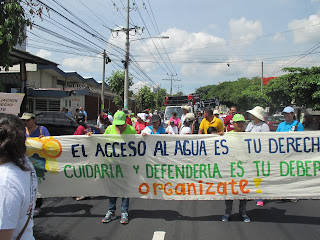 "They shut off my water.  We have no water in the house." Three generations of adults and children, including a newborn and a few others under age 2 live in the house -- maybe 19 or 20 people -- all with no water.  No water for drinking or cooking.  No water for bathing or washing clothes.  No water for sprinkling on the floor to hold down the dust or on the plants so they produce fruits.  No water. "I have a debt.  Finally they shut off the water.  I don't know in what way I will ever be able to pay this debt.  Everything fell apart all at once.  I don't know how we will resolve this situation." The water system in the community is owned and operated by ANDA, the public water utility in El Salvador.  Water is metered and bills are sent out on a monthly basis.  Most people go to local banks to pay their water bills in person.  The debt is more than $400.  The water source is a spigot at the corner of the tiny lot.  The family fills a 50-gallon drum a
Post a Comment
Read more 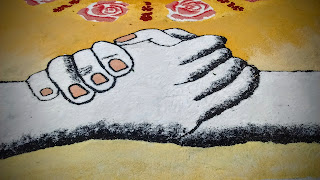 On November 16, 1989, six Jesuit priests, their housekeeper and her daughter were brutally shot to death by an assassination squad of the Salvadoran military.  Each year, on or around that date, a vigil of remembrance is held at the UCA (University of Central America in San Salvador).  Early in the morning, student groups from several universities, religious groups and social organizations send small teams of artists to the streets of the UCA campus where they begin to create colorful alfombras  (carpets).  Using tinted salt and following paper sketches, the teams work their magic.  Each carpet is different.  Each carpet shares a message of faith, hope, love, reconciliation or peace.  By 4:00 PM most of the carpets are complete, and visitors begin to tiptoe around the edges, pondering the messages, taking photos, and admiring the beauty created in memory of an evil, ugly event.  As the sun goes down, the colors of the carpets fade to gray.  Later in the evening, candles will once agai
1 comment
Read more

Days of Saints and The Dead 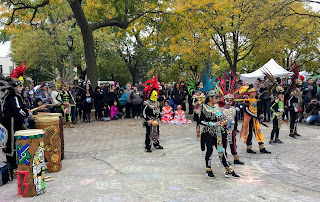 Claim your saintly identity with each step on your path. The Grandfather whispered these words in my ear during the passing of the peace.  The Grandfather was reiterating the message of the Bishop's sermon - what we believe is what the Apostle Paul writes in his letters:  sainthood comes in baptism.  We belong to God's kingdom now, and we live full, fruitful lives when we live in God's way right now.  Some day we will be laid out dead in a church and people will remember us, but we don't wait until that moment to claim our sainthood.  Today we celebrated All Saints Day in the Salvadoran Lutheran Church.  Today we remembered our loved ones, the saints who have gone beyond this short life into the long life of eternity.  Today we honored the saints who lived inspirational lives of faith and who, like the Lutheran pastors Francisco and Jesusita, lost their lives because of their Godly work.  Día de los Muertos celebration with Aztec dancers (USA) Depending on our
Post a Comment
Read more 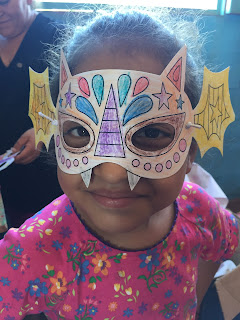 The word for mask  in Spanish is máscara.  This word is rooted in Arabic and relates to the idea of something false or hidden.  I recently learned that máscara is the word used for a mask that covers the entire face, and is made of plastic or paper maché.  There is a second Spanish word for mask , which is antifaz.   This word literally means "in front of the face" and is used for the kind of mask that covers the eyes.  Your favorite superhero or masquerade ball attendee might wear an antifaz . You can find inexpensive antifaz  masks at many craft stores or online for a very reasonable price, and if you happen to travel to El Salvador at Halloween, you might like to consider decorating these masks with little ones or adults.  Depending on the type of paper, you may need to use permanent markers.  Adults surely would enjoy adding sequins and feathers, so don't forget to pack the tacky glue.
Post a Comment
Read more
More posts