Get to Know the Holidays: March

Welcome to the month of March, the hottest and dustiest time of the year in El Salvador, when trees begin to flower, and when everyone awaits the one surprise rain shower which will birth the song of the chicharras (cicadas).
El Salvador has official holidays which are celebrated with a paid day off, and other holidays which are observed but folks still need to go to work.  So far, our journey through the calendar of monthly holidays has included only one paid holiday: New Year's Day.  There are officially no paid holidays in February or March (unless the Holy Week holidays fall in March).  Of course, businesses and organizations can give their employees time off for other celebrations as they may choose.
March 8:  International Women's Day
In El Salvador, the observance of the International Day of the Woman is highlighted throughout the month of March.  This is the month when women's advocacy groups, who work year-round to shine the light on economic, psychological and physical oppression and violence perpetrated upon women, bring their work out into the town squares, the streets and church sanctuaries (at least in the Lutheran Church).   El Salvador is a patriarchal society, where machismo and oppression of women is normalized, and where the LGBTQIA+ community is especially targeted for discrimination and violence.
In the Lutheran Church, International Women's Day and the World Day of Prayer for Peace and Justice are woven together to create a special Sunday of worship, learning and advocacy led by women.  The focus country for the 2021 World Day of Prayer is Vanuatu, an archipelago nation in the South Pacific.  Women in the Salvadoran Lutheran Church are sharing a brief study about the nation's culture, about the lives and work of women there, and about the impact of global climate change and rising sea levels on the islands which make up Vanuatu.
In many communities, women's entrepreneurship organizations hold fairs on Women's Day weekend, giving the women a chance to show off their stuff and also to learn from one another.  Women's groups often sponsor education events to increase community knowledge of Salvadoran women who worked for change and justice.  Photos and stories about Women's Day are a common theme in this blog:
Women's Day 2020
Women's Day 2019
Women's Day 2018
March 22:  World Water Day
Water protectors from interfaith church groups, human rights organizations and water advocacy groups  frequently protest outside the gates to the Supreme Court or the legislative Assembly, in the streets of San Salvador, at construction sites, along the banks of rivers, and wherever the clean water supply in El Salvador is at risk.  World Water Day is often a day on which all of the water protectors come together to place their different specific issues into the public eye in a united march.
March 24: Saint Romero, Martyr of the Americas
On March 24, 1980, Archbishop Oscar Arnulfo Romero stood at the altar while offering mass at the small chapel beside the Divina Providencia cancer hospital and was shot by an assassin.  That date marks the "official" beginning to a 12 year civil war which ripped El Salvador apart, leaving families with the scars of 75,000 dead civilians and 1 million people who fled from the country.  Romero spoke out on behalf of those who suffered under decades of oppression and those who were victimized by the death squads and military forces.  Romero is remembered for being the voice for the voiceless and for speaking truth to those in power.  On March 23rd, hundreds gather at the Salvador del Mundo monument (Jesus, Savior of the World) and walk in a candlelight vigil to the Metropolitan Cathedral. On March 24th, another large group gathers at the chapel at Divina Providencia for mass, and then walks to the cathedral. Together, Salvadorans and pilgrims from across the world remember the life, words and example of Saint Romero (who many still lovingly call Monseñor).
Palm Sunday
Palm Sunday often falls on a Sunday in March, and is celebrated in much the same way as it is celebrated in Christian churches around the world.  Churches are often adorned with palms over and around the entrance.  Children often process carrying palms, light, and the Word. Worshippers are often given palms or small decorations made from palms.  In the Lutheran Church, the biblical text usually focuses on the entrance of Jesus into Jerusalem and does not include the reading of the passion. 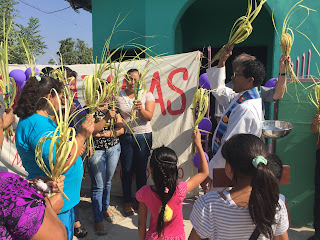 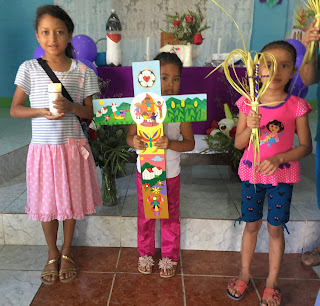