Showing posts from March, 2012
Show all

March 27, 2012
She was working around the house, doing the things a mom normally does while the kids are at school.  She looked up and saw a small group of people come up her short path and into the house.  One woman; three men.  She recognized one of the men.  They grabbed her and tied her up with her hands behind her back.  They began to beat her, striking her all over and punching her in the face and head.

None of the neighbors heard anything.

She lost consciousness.  She lay on the dirt floor while the one woman and three men gathered some things from her home:  a little bit of clothing, school papers, things that would burn.  They lit a fire next to her and left.

None of the neighbors smelled anything.

Three of her children came home from school.  They found their mom tied up, beaten, unconscious on the floor of her smokey house.  The fire had gone out.

This was not the welcome the mother wished to give her children at the end of the school day.  This was not something which should occur when …
Post a Comment
Read more

Until this morning, I was wearing six bracelets.  My rule is that if I receive a bracelet as a gift, I wear it til it breaks.  I have found that there are two suitable occasions for breaking this rule.  One is to attend a very special event with formal clothing such as the wedding of a daughter or a son.  The second is if someone asks me about one of the bracelets and I am moved to give it to them.  This morning, I was asked about the simple, gray, plastic band printed with the words, "¡No a la violencia!  ¡Si a la vida!" I received this bracelet about a month ago from a Salvadoran pastor, and…
1 comment
Read more 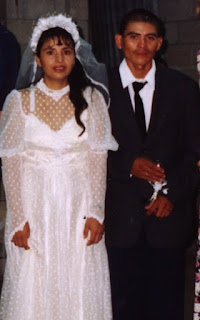 Our daughter is getting married in just a couple of weeks.  The usual crazy long to-do list is crazier and longer, and at the end of each day there are still more things listed under "to do" than "taaa-daaaa".  (You have to sing that last word for maximum effect.)

One of the "taaaa-daaaas" for the upcoming wedding is that our sister church pastor from El Salvador is coming.  A few months ago, when our son got married, our sister pastor was unable to share that wedding celebration with us because the US government was holding his passport and visa until a background check could be completed.  That took  about three months longer than we expected.  Those three months coincided with a deluge of rain which caused loss of life, homes, livelihood and crops in El Salvador.  Our sister pastor works with his national church to coordinate relief efforts in the wake of disasters.  We were all disappointed and frustrated with the visitor visa process which prevented…
Post a Comment
Read more
More posts