May 16, 2018
When I am in El Salvador, I try to cook with local ingredients and try my hand at whipping up a bit of local fare.  During the Easter holidays, we received a gift of small marañones - cashew apples.  Of course the prized part of the marañon is the seed that hangs down below the fruit.  Some people have told me that the fruit is good for much more than animal feed, but I have seen plenty of marañones stuck on popsicle sticks and put into the freezer as a treat for children, and I also have heard that some people make a refresco or fresh fruit drink from the fruit.  With the gift of a small plastic bag full of small marañones sitting in my kitchen, I decided to do a bit of research and make something with them.  I settled on a refresco.

The first step was to remove the seeds from the apples.  I naively thought I could dry the seeds and maybe roast them.  After all, cashews are delicious.  However, with a little research I learned that inside the little green outer skin there is a very toxin similar to poison oak.  To remove the cashew nut from the outer shell, the green seeds need to be heat processed.  The toxin is very flammable, so either this happens in a big flaming fiesta (not suitable for a city dweller) or can be creatively done by burying the seeds in sand inside an old pot and heating up the whole thing (keeping that sand and pot ONLY for this use).  Well, I gave my seeds to friend who lives out in the country.  Maybe she will plant them or process them. 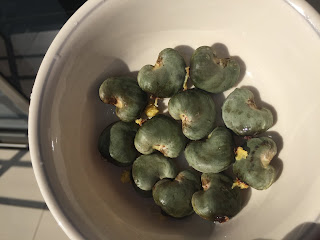 The next step was to sort the apples, wash them, get rid of the rotten parts, and chop them up.  They smell a little funky, though they do look like apples.  The raw fruit, like so many fruits in El Salvador, does not really have a flavor comparable to something with which we are familiar in the land of apples, pears and berries (where I live when in the US).  It is is sort of like a not-very-sweet pear. 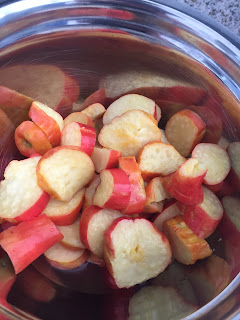 My next step was to add some water.  I think another fruit juice could be added instead, such as pineapple, but I wanted to see what the refresco would taste like all on its own.  I did not have a blender (I know, my Salvadoran kitchen definitely needs a blender), but I do have an immersion blender, so I used that.  It took a bit to grind up the fruit.  I added water to get the right texture.  It was a little pulpy (ok, chewy) and I think a real blender could have improved that aspect.  Also, let's be real, this color is not very appetizing.  I added a little sugar and kept it simple.  Cinnamon would be a good addition. 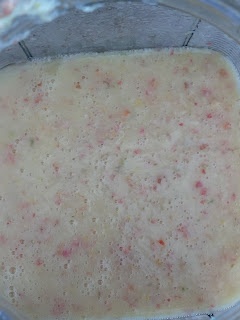 I put the refresco in a jar in the fridge.  It was much better the second day.  It was also a pretty good base for a Flor de Fuego cocktail. 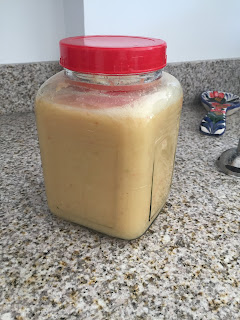 All in all, it was a good first attempt at creating something with marañones.  With some orange and pineapple and ginger, or with some cinnamon and coconut, I think this drink has some serious potential.