Off the Beaten Path: Juayua is Worth More than Just a Click 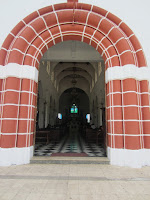 After lunch in Santa Ana, we headed out on a beautiful mountain highway to the small town of Juayua, which apparently I have included in a Just Click story once before. I think it's funny that such a little town, sort of off of the beaten path, has made it into my Salvadoran experiences a number of times. Juayua is an endpoint for traveling the Ruta de las Flores - a lovely scenic drive which everyone in our group was eager to experience, so it was the perfect opportunity to spend a little time soaking in the local culture.

We parked the bus in the town square, and set a return time so that everyone could wander about at their leisure. Most of the women in the group walked straight to the church. Several parishoners were kneeling as the priest was 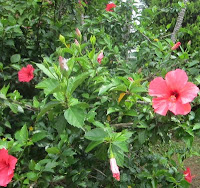 saying the Mass, and the women in our group knelt in the back rows, instructing their children to kneel quietly beside them. After spending some time in prayer, our group emerged from the church to admire the facade and the nearby flowers. Then we scattered, this way and that, into the shops and under the trees in the town square.

I wandered over to a woman who was selling one of my all-time favorite street foods: green mango with chili! The mangoes are peeled and sliced into small plastic bags. Then, per the customer's desire, a couple of spoonfuls of different ground-up spices and a few squirts of red 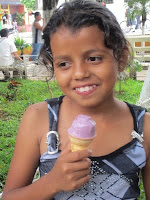 chili sauce are added. Delicious! Next it was into the corner bakery where I bought a sweet piece of tamarind cake to share on the bus. It was a beautiful cloudy afternoon, and most of our group had gathered beneath the trees which surround a circular fountain in the center of the square. We shared our treats with one another, which ended up producing a lot more business for the green-mango-with-chili lady.

As we were relaxing and sharing stories, I recalled one of my favorite visits to Juayua...back in 2005. We were a pretty large group of families and college youth from my home church, and we were taking a day to relax and see some of the countryside after running a big VBS event with leaders from the Salvadoran Lutheran Church. It was December, and the flowers along the Ruta de las Flores were abundant and amazing. We had driven the Route of the Flowers and ended up in Juayua. We had to part outside of town and 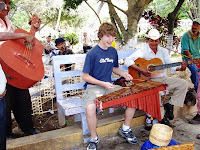 walk in because the Feria Gastronomica or Food Festival was in full swing. Vendors were selling all kinds of artisan crafts and textiles from throughout El Salvador, many of which had unique Guatemalan influences. The highlight of that day was when our teenage son was invited to play the marimba with a local street band.

Although the recent visit was not on a Food Festival day, some of the Salvadorans in our group had heard about it and were making plans to come back in the future.

Before we knew it, it was time to get on the bus and head out onto the Route of the Flowers. It's never easy to get everyone back onto a bus after a leisurely break 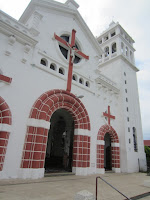 when all are scattered about. First we were missing two, then two more...it's really pretty funny how this is the same no matter where you are and that you can almost always guess who the missing ones will be. We laughed and joked around about this once we were on our way.

Unfortunately, along the Ruta de las Flores the flowers were just starting to bloom so there were not too many to see. Yet, flowers or no flowers, a beautiful drive through the countryside, when the breeze blowing into the bus windows is almost cool, when musica romantica is playing in the background and conversation is singing in the foreground, when and treats and cake are passing from friend to friend, is a wonderful way to spend an afternoon together.