We took a short drive from Tazumal to the city of Santa Ana. Neither we nor our driver had ever entered the city from that side, so we had to stop and ask for directions. Soon we were on a street which showed up on our city map. It was fun to see the modern outskirts as we navigated our way into the colonial and early 20th century architecture and narrow streets of the old city center. We emerged from the bus across from the cathedral, counted heads, and like a row of ducks walked across the square to enter the cathedral.

Ines was the only one from our sister community who had been to the city of Santa Ana. She had come to visit the cathedral twice, quite some time ago. Ines told us that when her twins were born, they had health problems. She came to the cathedral for some purpose at that time, either for a blessing or to pray or to request a mass -- her serious face and low tone of voice indicated that it had been a very difficult time for her, so no one pressed her for details. Thanks be to God, her twins are now healthy and happy teen-agers who play soccer and do well in school.

We walked into the sanctuary, and most of the women knelt down to pray. A few stood quietly gazing and the statues, walking slowly, pausing often. We stayed a good long time, and every now and then one of the women would ask me to take a photo of her in front of the altar or one of the side altars. 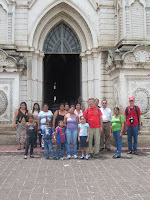 My friend Julia knows all of the stories about the saints. We stopped near a statue of St. Martin de Porres. Julia is drawn to him because he is brown-skinned and the saint for mixed-race peoples. She told me about the orphanage he started and how he was known to be kind to animals. She knows a lot of details about the miracles which surround this saint, and I think she wanted her little grandson to "overhear" all of the stories as she told me. At one point in her narrative we were interrupted by a man who had been praying fervently at a nearby altar. He asked if we knew of any work he could do; he was desperate to find work so he could feed his family. He was well-educated and had been working as a professional in some kind of business but had been laid off. He was dressed up to come to the church to pray and then to go to an agency. Julia listened carefully and offered her understanding and prayers.

We emerged into the sunlight, took a group photo (it was Tourist Day!), and wandered over to the theater, and, determining it was too expensive for all of us to go inside, decided to hang out in the square. We sent a "scouting team" to find a cafe that could feed 27 people, and they had success! We spent about 15 minutes taking photos in the shade and laughing at the antics of the kids. Noontime ar 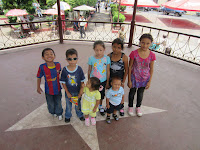 rived and we walked in our duck-line to the cafe. It was a wonderful place with a big covered patio area that could seat a large crowd. Chicken, rice, veggies, Chow Mien with shrimp, tortillas and soda. We sat at small tables in groups so we could chat and enjoy lunch together. It was just lovely.

After lunch we climbed aboard the bus for our next destination...la Ruta de las Flores!

For more about Santa Ana, you can read my previous Off the Beaten Path Story.

Culture Delegations Off the Beaten Path