February 21, 2015
In the dark of the night, el norte began to shake the trees and rattle the windows.  We set out in the early morning, hoping that the coming of the north wind would not prevent us from navigating the waters of Lake Ilopango.

A Salvadoran friend, whom we have known since she was a little girl, rode along with us as we traveled the highway east of the city.  We descended toward the lake and she pointed out the road to our left, "for the tourists," she said, "everything is more expensive and you have to pay to access the lake."  We took the low road, the one to the right which she called "the way of the dry palms."  Her mom and dad and little sister would come here on weekends to have cook-outs and swim with family and friends.  As we approached the lake shore we could see some new development.  The local municipality built a long concrete patio and rents spaces to small establishments which sell food and beverages.  "Now it has gotten expensive over here, too." our friend said, "Look, $7 for a plate of fish...and all the palm trees are gone.  It's not the same."  She pointed to the restaurant at the corner which featured hundreds of little Pilsener beer flags flapping in the wind.  "Hahaha, this is where we would go dancing and one of our friends would always get free drinks."

Our little group was guarded by two guys with big guns.  We paid them 25 cents per person as to use the restrooms behind the development.  "There is a lot of gang activity here," said our pastor.  He and his nephew had met us at the lake and made the arrangements for our excursion.  "Lots of gang activity" meant "don't walk around here without the group and the friendly GWG's (guys with guns)."  We met up with two lancheros (boatmen) who divided us into two groups.  With life jackets on, everyone was seated and the boats were off.  Our destination:  the opposite shore.  Our purpose:  visit the site of a former refugee camp, a property owned by the Salvadoran Lutheran Church.

With the wind at our backs and the sun in our faces, we headed across the lake.  The waves were rolling, which took its toll on a couple of people.  The sun shimmering on the water was beautiful.  "Did you hear about the helicopter full of gringos which crashed into the waters?  Their remains have never been found," stated the boatman.  "Why not?" we asked.  "The lake has no bottom."  As it turns out, the remains of 6 US servicemen killed in 1987 were located after the crash.  Yet apparently the bottom of this deep lake is filled with springs and mud and is rumored to be bottomless.

Lake Ilopongo was formed inside the caldera of the Ilopongo volcano which erupted with great force in the fifth century CE.  When the volcano blew its top, the lava exploded and flowed over surrounding Mayan villages, destroying everything in its wake and leaving behind a great crater which filled with water.  The quality of the water is quite good, due in part to an outflow river which some archaeologists believe was created by the Mayans after the eruption to control the rising lake water and to improve its quality.  As the water drained, the cinder cone island Ilopongo was exposed.  Over the years other events have occurred, as recently as during the late 1800's when a small ridge of islands know as "the burnt islands" formed near the far shore.  As we pushed on through the waves (at a very slow speed), the water seemed really clean and warm.  Four-eyed fish jumped up to greet us every now and then, and birds flocked near the small islands.

At the end of our hour-long ride, we disembarked on the opposite shore.  We were greeted by steeply sloped land, humble buildings, and clear evidence of creative recycling to create homes for chickens and other domesticated animals.  We walked up to the house, the former administrative building of the refugee camp.  There we met two brothers, who have lived in this place since the time of the earthquakes in 2001.  The brothers' story is somewhat of a mystery, but their love for God and love for each other was very apparent.  We shared our feelings about being in this peaceful place, and heard bits and pieces of its history.  During the final years of the civil war, the Lutheran refugee camp near Nejapa was closing down, and families wanted to live out in the country closer to their homelands.  They came to this place to live.  It was not an easy existence: the camp was reachable only by boat since the roads around the ridge at the top of the crater were (and still are) in very poor condition.  The military came on several occasions and took family members away in helicopters.  As we sat in the shade of the trees, listened to the birds, looked out over the water and felt the peaceful breeze, we struggled to imagine the sights and sounds of helicopters, screaming, soldiers, weapons and war.

The brothers brought out their guitars.  They taught themselves to play in order to "get through the desperate times."  They listened and tuned and looked at each other.  Complete synchronicity, complete harmony.  It was magical.  They sang ballads of life and faith and all of us clapped to the rhythm and smiled with joy.

The Lutheran Church is thinking about creating a new kind of camp on this land - a place for youth, a place for visiting delegations, a place for rest, a place for meditation, a place for hiking, a place for growing medicinal and sustainable crops.  We were there in part to share our ideas.  We hiked up the toward the ridge and were impressed by breathtaking views of the lake and variety of vegetation, including remnants of small fields of corn, squash and beans.  The brothers shared their knowledge of the trees and plants.  "This sap is brewed into a tea and after two doses, the person is cured of cholera."  The bark, the leaves, the seeds, the sap...out of necessity and with the wisdom of the ancestors these guys knew how to survive using the gifts of nature.  We climbed back down the hill, making good use of branches whacked into pointed walking sticks by the brothers' sharp machetes.

The wind strength had continued to increase, and as we approached the beach, we could see that our departure would require some prayer and expertise.  The boat lines, tied to logs along the shore, were pulled taut against the wind.  A brother slipped off his boots and pants and jumped into the water.   Members of our team followed suit, pushing the boats to loosen the lines.  We yanked at the ties on our life jackets, tightening them firm around our bodies, removed our shoes, tucked cameras well inside our underwear and grabbed old plastic bottles and containers from the beach.  We took our places inside the boats.  We had to wait for the perfect moment to make a run at the surf, timing it so we would hit the sweet flat spot between two waves.  We held hands and prayed to Jesus who calmed the seas, and we set out.

Our boat made it off the shore, the other boat followed.  The boats separated themselves so that if one got caught in a situation, the other would not meet a similar fate and could go for help.  We sang camp songs.  We sang hymns.  The waves consistently crashed over the bow and we bailed and bailed.  We never doubted, too much, that we would make it.  There were a few great moments when a familiar tune had North Americans and Salvadorans singing together in the harmony of Pentecost.  We made it to the half-way point just as the last of our good bailing containers was whisked overboard, but at that point we felt secure enough to stop bailing and to celebrate by singing El Sombrero Azul  and our favorite Disney songs.  And when we made it to the home shore, we jumped out of the boat, extracted our damp cameras and took a few photos to show that we had survived the crossing with faith, singing and laughter.

One piece of advice for the Lutheran Church:  get bigger boats.

We stood dripping wet,  soaking up the heat of the sun and taking advantage of the warm breeze.  "We haven't seen waves like this in more than 2 years," said one of the boatmen, barely smiling.  During the voyage the men had not seemed too worried.  They have been navigating their small boats, crossing Lake Ilopongo for more than 40 years. 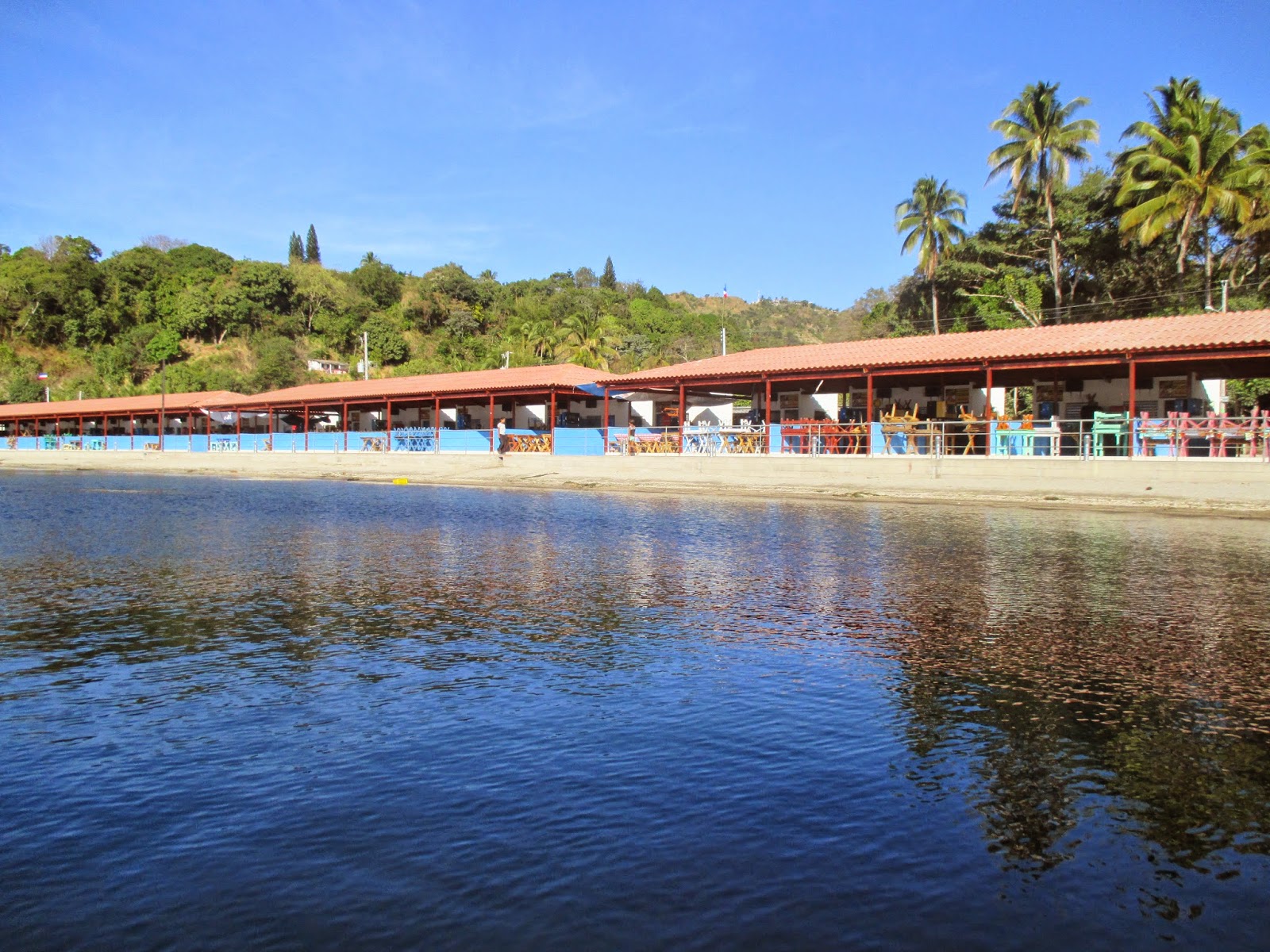 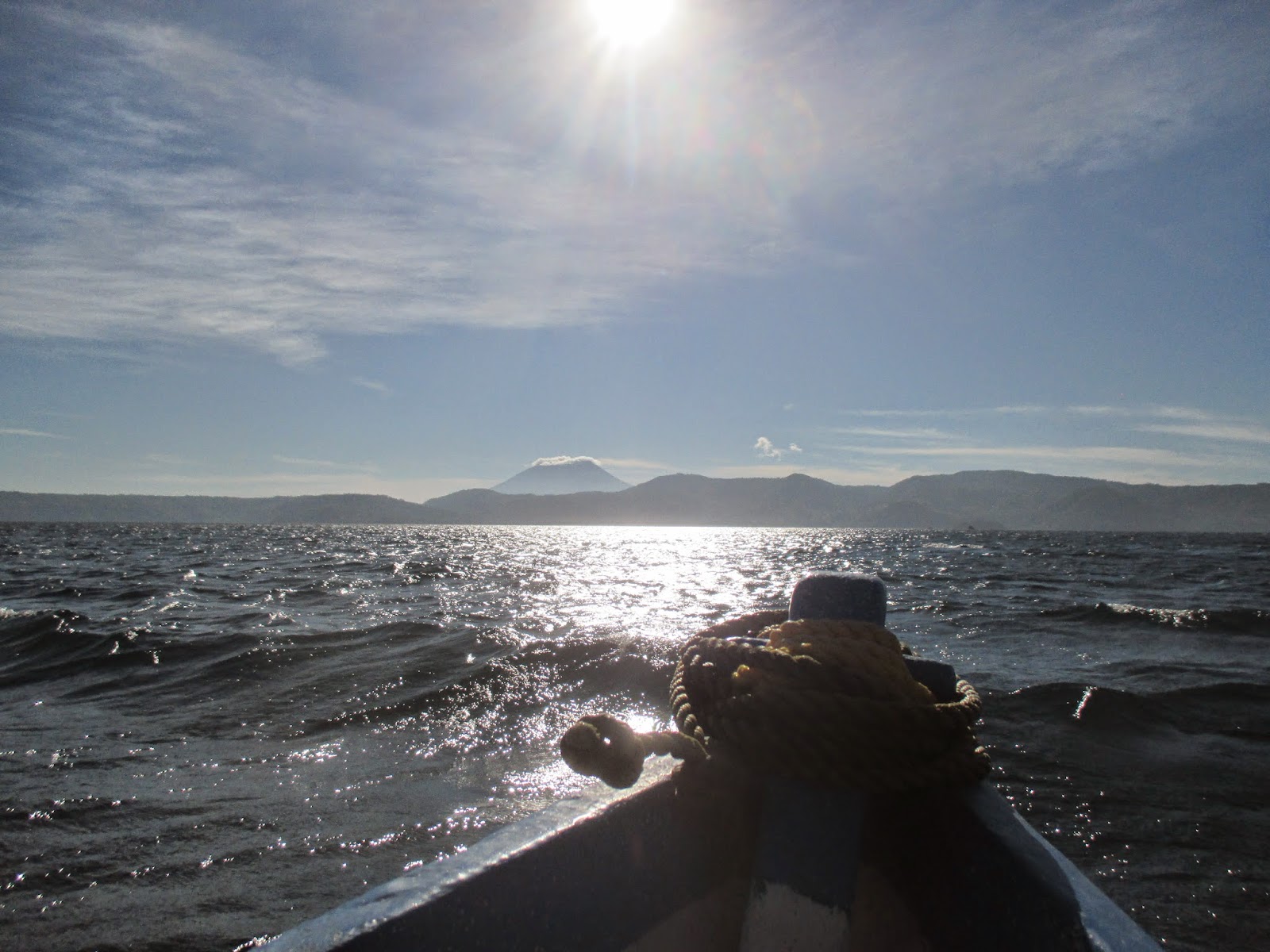 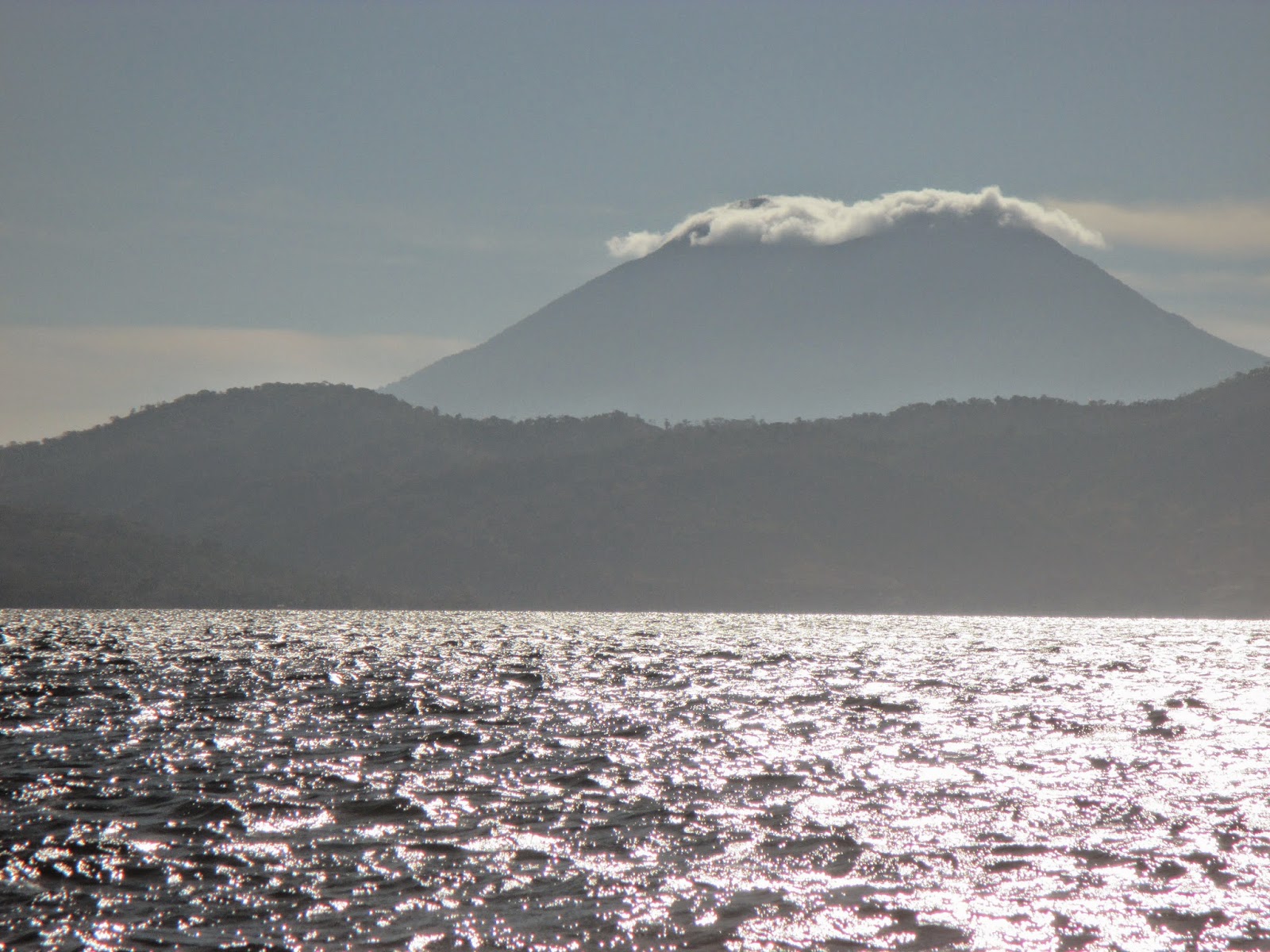 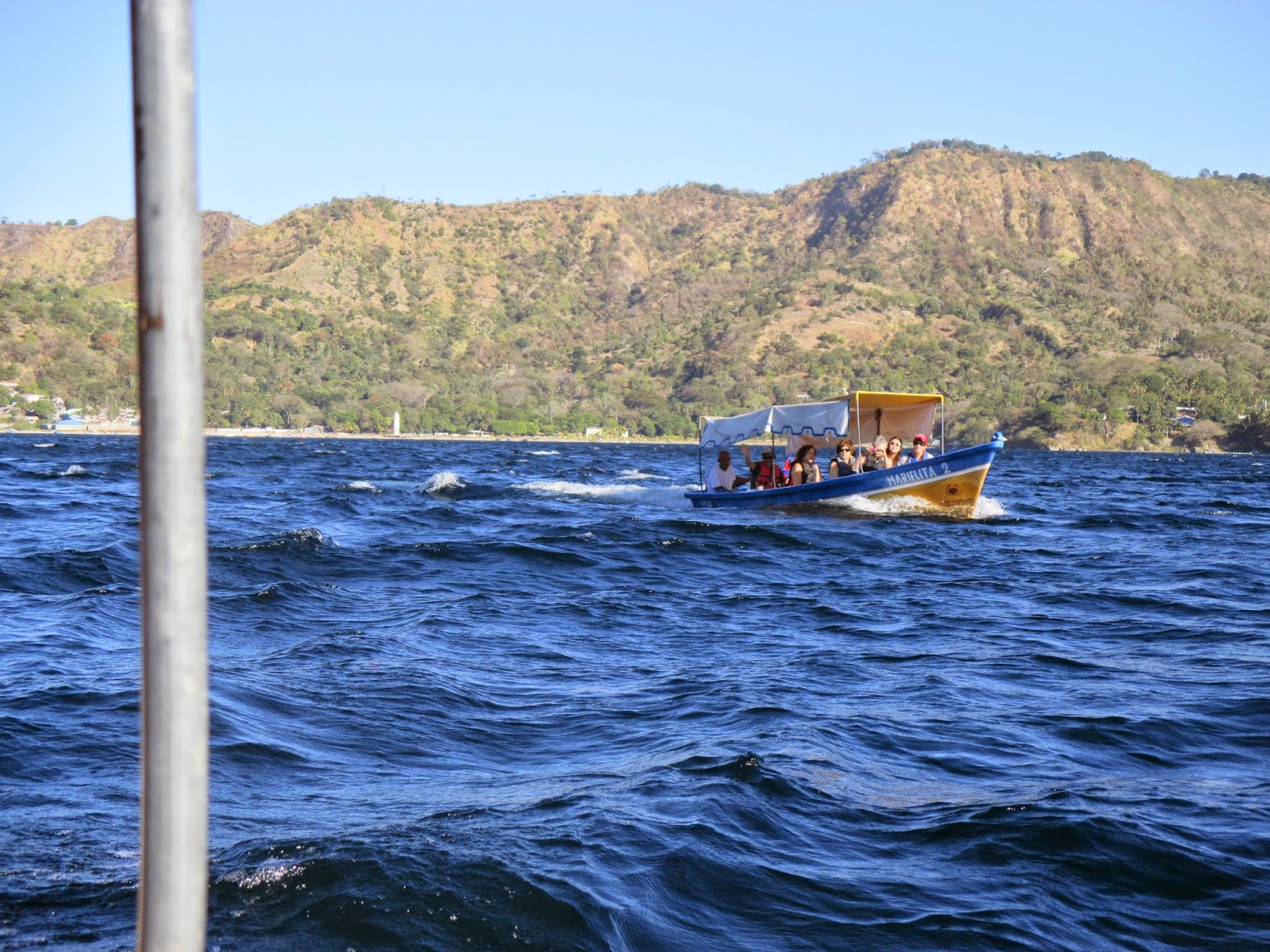 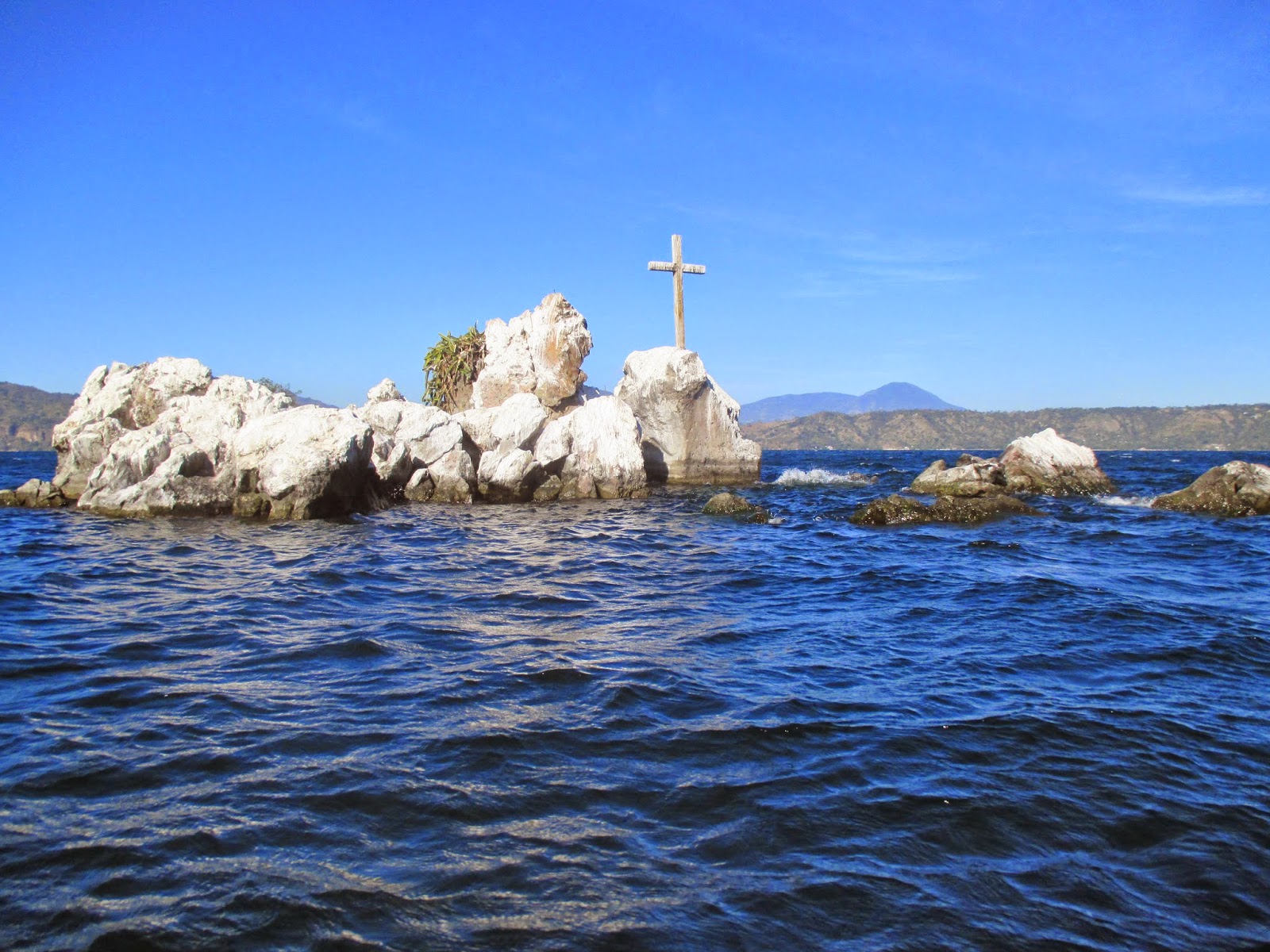 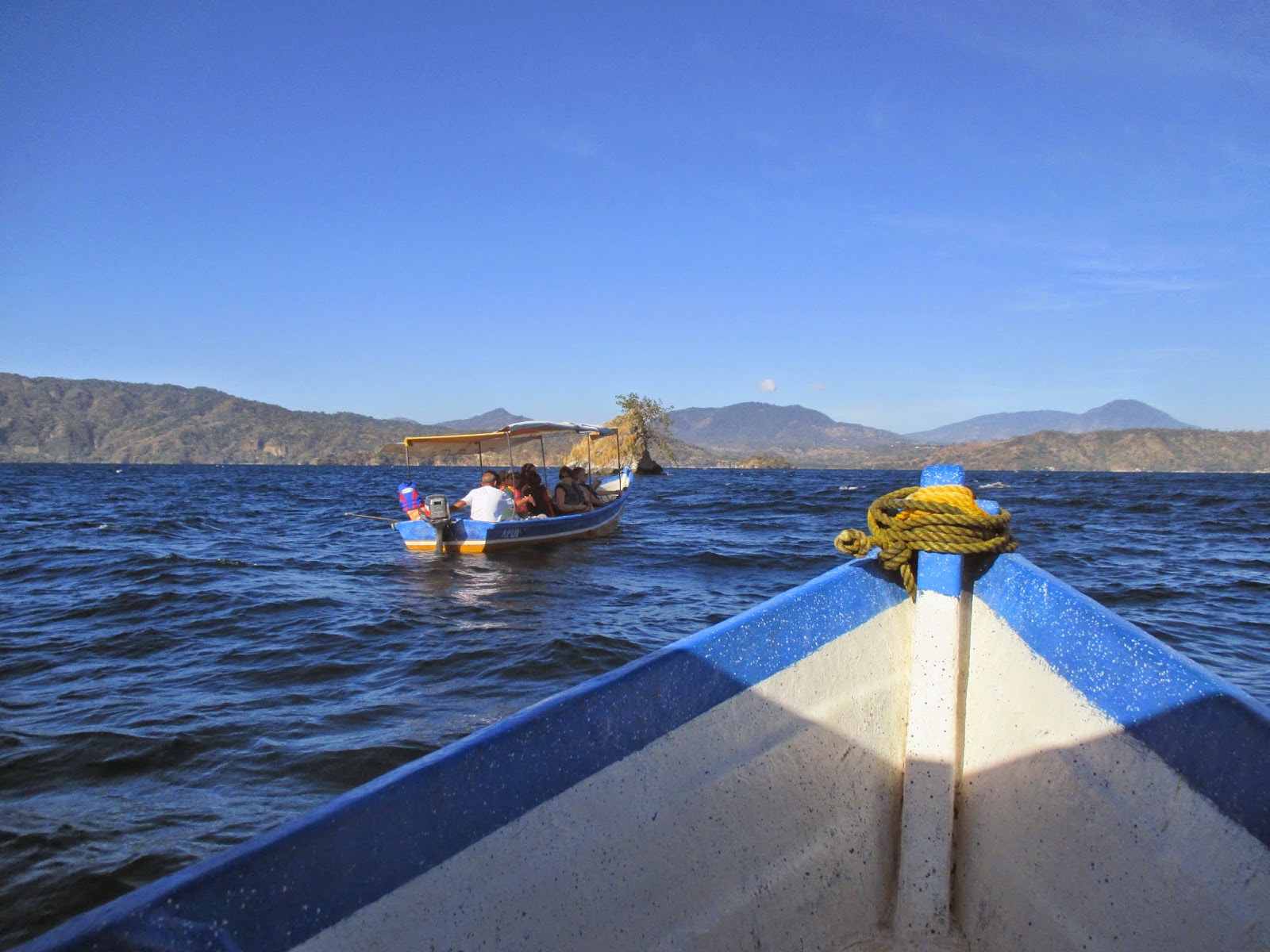 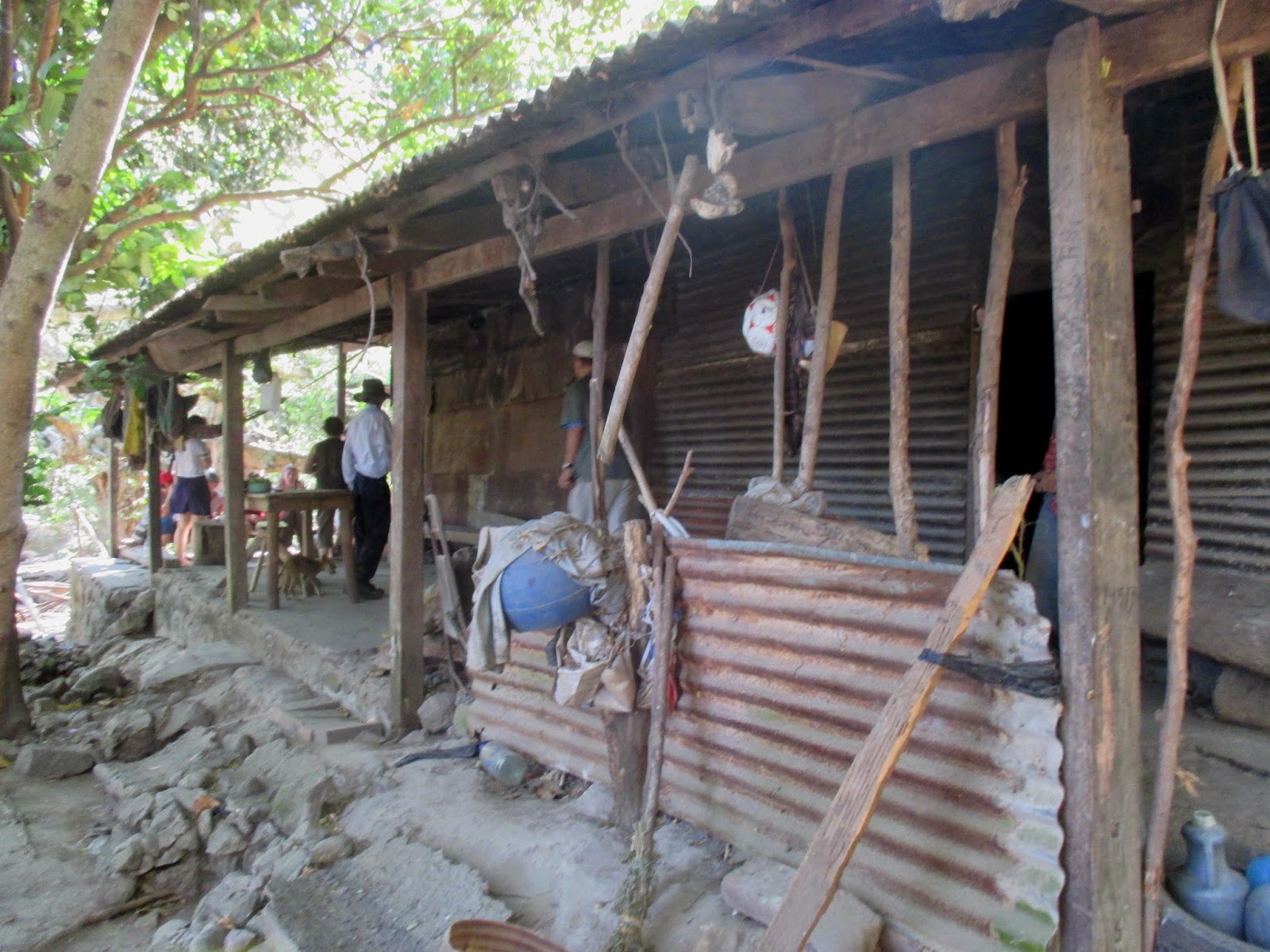 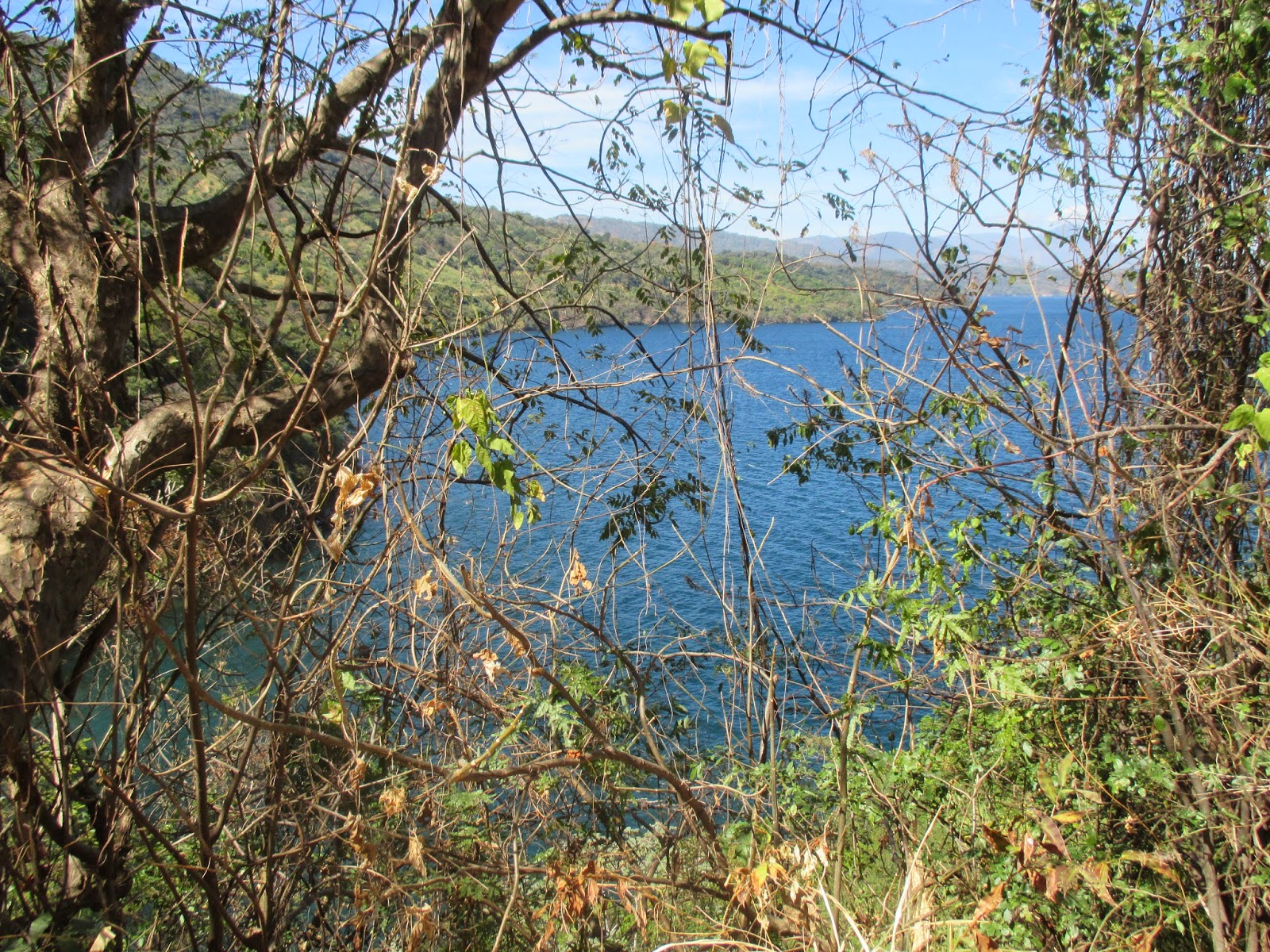 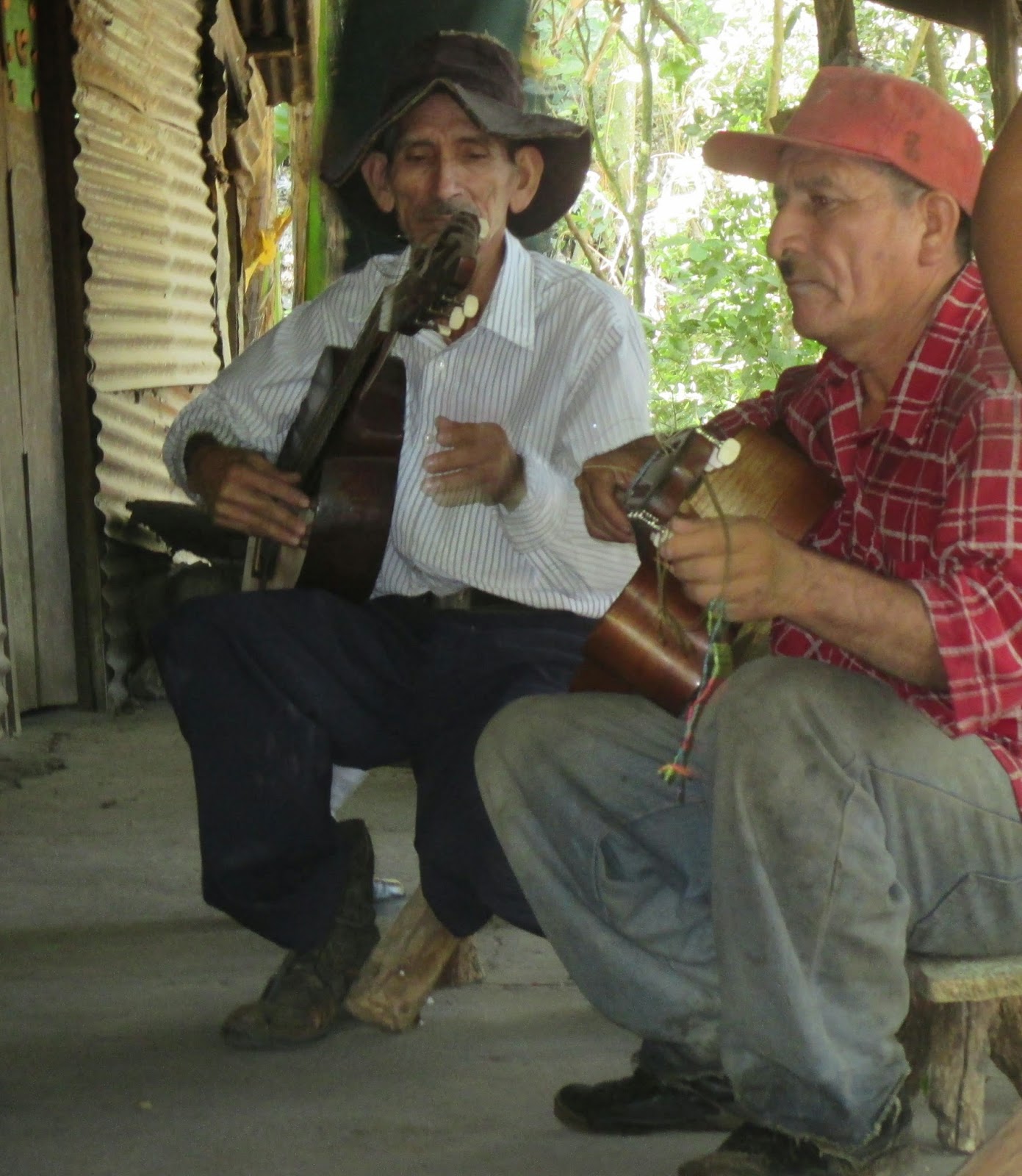 Some of the songs we sang:  "How Great Thou Art," "My God is so Great," "Be Bold, Be Strong," "I will call upon the Lord," "You have come down to the Lakeshore," "I the Lord of Sea and Sky," and "Jesus Loves Me"... and only after we were safe, songs from The Little Mermaid
Adventure Current Events Delegations Faith History music Nature Off the Beaten Path Projects