May 23, 2011
Our sister church community was formed when families were brought together in the convolution of lost and landless families and the Peace Accords and refugee resettlement and strangers who suddenly became neighbors. Families were given small plots of land which had been carved off of the corners of the surrounding plantations in response to a directive of the Peace Accords to implement land reform. To their designated lots of rocky earth moms and dads and teens and little ones dragged sheets of corrugated tin and plastic, or sticks with which to construct mud and stick walls. The top of the hill was claimed for the church, Heroes of the Faith Lutheran Church, and the pathways were given the names of martyrs and heroes.

Little by little, families worked to make their homes a bit more permanent, with adobe or cement. And little by little, friendships formed, relatives joined their family members and the community grew. The little community, which was originally described as an unnamed spot on the road to Tonacatepeque, became "Los Héroes." And although the community earned an official name, the people have yet to gain official deed to their lots. The absence of legal titles for the property has been a constant challenge...

No official school: then the fight for a teacher, for accreditation, for promised government resources. Today, there is a little school for children in pre-kindergarten through grade 6. The fight now: for a wall to protect the children from the busy road and the violence which often occurs there.

No police protections: then the fight for patrols outside of the community, for patrols on the soccer field. Little by little, the police came to provide protection and security for special events. Now the soldiers are there too, standing and watching from their posts at the top of the hill. Some of the soldiers chat with the neighbors. Some of the soldiers bang on doors during the night, looking for gang members. Some of the officers smile and make funny faces at the little kids. Some of the officers bang on doors during the day, flipping the mattresses, peering into the nooks and crannies of the tiny homes, looking for evidence of gang affiliation.

Los Héroes has grown up in an environment of growing violence throughout the country. As a community which began its life as an unlikely gathering of strangers on tiny plots of untitled land - a community in which building consensus has been nearly impossible - a community in which religious and political differences have often created divisions - a community situated in an unnamed spot on one of the most violence-prone roads in the country, Los Héroes has experienced intense growing pains. Gangs are active. Murders have happened. Young lives have been lost. And in response, walls have been built.

e paths through the community once offered views of the countryside in the distance, and views of the front yards and homes along the paths. The countryside is still there; the yards are hidden. Most are enclosed, surrounded by metal or concrete block or barbed wire or old bed springs. The families have walled themselves in, seeking safety from the violence around them.

Walls built around families do not help to build community. Inside their little fortresses, families know this. 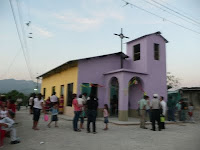 e place where walls were built by the hands of grieving mothers and gang members together, in this one place, the church, people gather in community. Youth groups, Bible study groups, support groups, community development groups have been nurtured in this place. Families are being empowered to host group meetings in their homes, with some groups strategically designed so that people do not need to walk across gang boundaries which could place them in danger. From behind the walls and through the open gates, lively conversation and laughter and the energy of friends being together and building community bubble up and out.

Recently, a person who has functioned as a source of political and religious and geographic division in the community came to the top of the hill, to the Lutheran Church, seeking permission and training to start a Bible Study group and to work together with others in an effort to further unite the community. This person's petition was welcomed publicly and joy was expressed by all who were gathered in the church that while the visible walls may need to persist, the invisible walls continue to crumble.
Culture Current Events God at Work Relationships