Off the Beaten Path: El Mozote, 30 Years Down the Road 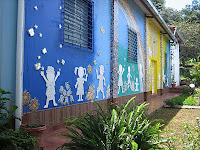 Thirty years ago, a terrible massacre was carried out by the Atlacatl Battalion of the Salvadoran armed forces in the small town of El Mozote. More than 1000 people were killed. This week, Tim's El Salvador Blog is dedicating its posts to sharing the story of this horrific event.
Three years ago I visited El Mozote. Tim was with me. A very dear friend from our sister church, who has a chauffeur's license, drove us there in a rented car. Although our friend had

heard of the massacre, he had not been to El Mozote and he knew very little about what actually happened there. He is a politically active, staunch FMLN supporter who knows a great deal about what happened during the war, so this surprised me a little.
We made the long drive from the capital, from highway, to small paved road, to rocky bumpy road, to dirt path. We paused along the way for lunch in a small town, enjoying a little time for rest and conversation before beginning a visit to a place which we knew would be very difficult to visit.
When we

arrived in El Mozote the first thing that struck me was the quiet. It is quiet. The homes which held life and families in 1981 are dead shells. Signs of the violence which occurred are all around. As we paused near the town square a young woman came to greet us. She is a survivor - a survivor only because she was not at home at the time of the massacre. Her mom had just had a baby, so she had been sent off to her aunt's house in a nearby town. The 1981 slaughter of the innocents, including her mom and her baby sister who she never knew, set the path for this young woman. She has dedicated her life to sharing the story.

As we walked through the town, our guide pointed out the
bomb craters, explained how the men were corralled into an open space, how the women and children were placed into the church. She described their deaths. Our friend asked a lot of questions. He marveled at the richness and beauty of this agricultural land. That juxtaposition of the beautiful and the ugly was difficult for all of us to experience.
Outside the church, a beautiful memorial garden stands as a sign of life and hope. A colorful mural on the side of the church honors the lost lives of the children. It's impossible to understand how the soldiers could have killed grandpas, dads, grandmas, moms, children and babies. The images in the mural -- the colors, the playfulness, and the joy, express what were the hopes for the earthly lives of these lost children, and the faith we have that these little ones are playing and running and laughing with joy in heaven.
At the end of our visit we stopped at the small tourist center which the women of El Mozote have set up near the town square. Our friend paged through a book of photographs, pondering all he had seen. He said, "We Salvadorans need to come here, to remember this. The children in our community need to know something about the history. They don't know anything."
We bought the book and gave it to our friend later as a gift so that he could share the lessons of this horrific event with others. On our drive back, we talked a little about our feelings. I remember one comment which our friend made about the condition of the road, "The government wants this road to be bad so no one will come here." We made a few additional stops, including a visit to the Museum of the Salvadoran Revolution and a park filled with happy families and fresh air.
Since the visit to El Mozote, the adults in our sister church community have shared a little bit more of their stories and the history of the war with their children. They have hosted a couple of movie nights, showing documentaries and films such as Voces Inocentes and discussing them with their children. There is healing in the telling, and lessons for the future.
History Off the Beaten Path Relationships