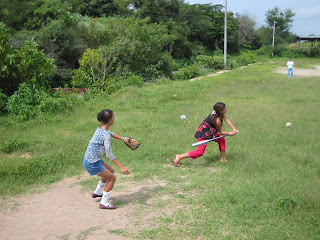 Every now and then, the women and girls in our sister community play softball.  It seems to be one of those things that comes and goes, maybe depending on the availability of equipment or leaders or space on the soccer field or safety.  There are a couple of older women in the community who are all out softball stars, who hit with great power, run fast -- who play and cheer with great exuberance.  These dynamo player-coaches periodically rise up and organize the girls into one or two community teams.

My all-time favorite girls softball experience in El Salvador took place a few years back.  Our sister community girls were in a tournament with a neighboring community.  The girls met at the soccer field to practice before the game.  Our goddaughter, about 7 months pregnant and wearing flip flops, grabbed hold of the bat and started hitting the ball out into the field.  I still chuckle at the memory of watching her hit those balls. I also chuckle at the memory of the catcher, crouching down behind home with her Mary-Jane school shoes and too-small soccer shin guards for protection.

The girls practiced a bit, but then found out the game had to be moved from the original field location (the prime field strewn with sporadic patches of grass and cows munching along the perimeter) to a dirt field at the edge of town.  This secondary field was situated at the edge of a steep drop into a ravine, so that a ball hit over the fence would bring cheers for a home run, followed by a climb over the fence, a precarious trudge through some garbage and a serious delay of game.

The girls gathered for a review of the rules and determination of where the bases would be.  Our goddaughter was the ump, and while I chuckle at the memory of her at-bats, I marvel at her saucy no-nonsense attitude while setting the rules and governing play.  The game was played, with loud calls of "bola" and "estraaaaayyyyk" and "hom run!"  The two teams were pretty evenly matched, and they played until the rain ended the game.  I don't even recall who won - for as serious as those girls were, in the end it was a tournament for fun. 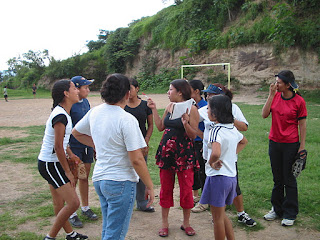 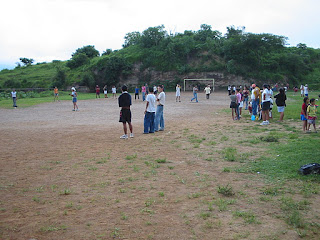 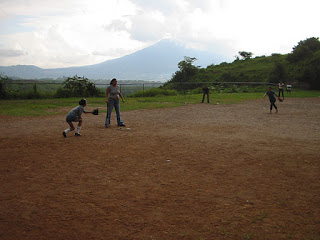