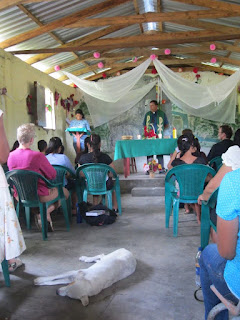 They meander in late, usually after the first hymn has been sung.  They have to sit up front because that is where there is space.  They tend to nod off during the sermon.  They seem to know that woofing during worship is frowned upon.  God's waggy-tailed creatures are welcome to worship in El Salvador.

Dogs, or chuchos, wander the streets of the cities and small towns, they can sleep just about anywhere, and they have a great knack for keeping visitors awake in the night.  In the city they hover behind metal doors and gates, ready to bark loudly at any passerby.  In the pueblos and countryside, it's difficult for an outsider to figure out which are the strays and which are the pets, because they roam freely and often lay down at your feet waiting for a pat or a snack.

As families in our sister church community have increasingly been threatened by gang violence, they have fortified the fences, walls and gates which surround their houses and they have trained their dogs to patrol the perimeters.  A while back, one of the girls in the community took me on a tour -- a dog tour -- to teach me where the mean dogs live so that I wouldn't turn a corner and come upon one a scary dog without a leash.  The kids know just how to walk from place to place, avoiding the dangers, including the mean dogs who are faithful to their owners.

One night I learned the value of a good and faithful dog.  We had gone to bed; it was about 10:30 pm.  I was laying awake on the top bunk, my hostess was asleep below me and her husband was in the hammock in the other room.  The dogs were asleep in their corner of the yard.  Suddenly the big dog began to bark fiercely.  The couple got up, the wife grabbing a machete from beneath her pillow and closely following her husband to the door.  They whispered to one another, assuming I was asleep.  The barking had stopped.  They listened for a few moments, wondering if all was well or if someone had killed their dog.  They slowly unlatched the door and whistled softly.  The dogs came to the door.  The husband peered outside, and slowly exited the house.  He checked all around, making sure no one had scaled the fence, that no one was crouching below the windows.  He settled the dogs into their places, and came back into the house.  The machete was hung on a nail by the door, and everyone returned to bed.

The next morning, my hostess asked if I had heard anything in the night.  I confessed that I had been awake.  "Well," she said, "we are thankful for the dogs...because it is the boys that you love during the day who will come to kill you in the night." This was not an easy thing for her to say, nor for me to believe.  But, this is part of the reality of life in our sister church community.

I was recently eating lunch in a small garden restaurant.  A dog wandered from table to table, looking up at the patrons with big loving eyes.  Our friend gathered up the chicken bones, tortilla scraps and gravy drippings and put them onto a paper plate.  He took the plate out to the sidewalk and fed the big-eyed dog.  Salvadoran chuchos are fed tortillas with the family, chomp on chicken bones and have really white teeth, are referred to as "creatures of God," are looked upon with compassion (from a distance) when they are sick with mange, are trusted as protectors, and are allowed to sleep through a sermon on a cool church floor. 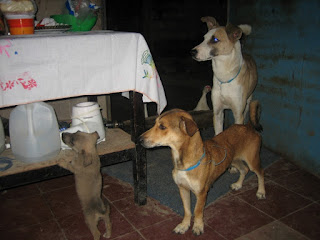