Construction in the city of Lima:  precarious.  Buildings of brick, never really finished.  Rebar sprouts from every rooftop, inviting another layer of family or another possibility to earn rent.  I am not an engineer, but these buildings do not seem stable.  The facades are deceptive, stuccoed over and painted green or purple or blue, but a peek behind shows the brick, wood, cardboard, plastic, and metal collage of apartments. When we were in the catacombs of the Franciscan monastery, the guide described the centuries-old mortar which included crushed bird egg shells and earthly elements which made it very strong (centuries strong!)  Maybe there is something going on with the new mortar that makes it strong, but to me, much of the building in Lima looks precarious. 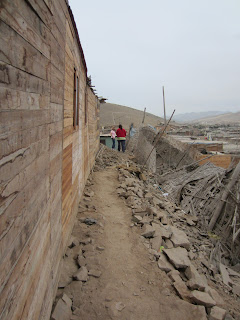 Construction on the hills outside of Lima:  precarious.  Actually, more like dangerous.  I am not a mountain goat, and climbing up to the houses at the top edges of the community seemed like an invitation to break a bone.  Unbelievably, no none fell.  Part of our group spent 3 days up there building 2 houses on platforms which were made by stacking rocks one upon another.  There was some rock-structure within the hill, but the dirt on top slid easily.  We asked what would happen if an earthquake struck.  One of the men said, "Well, the people down at the bottom will have their houses fall down, but they will mostly be OK.  The people on the hill will all be dead."

We visited a young mother who had been hit by a car as she tried to cross the highway.  The highway cuts through the two communities which are served by the Lutheran Church.  Everyone makes the precarious walk across the highway to catch a bus to work or school. Activists from the church are petitioning the government to install multiple safe footbridges across the highway to facilitate safe crossing on a daily basis and in the case of a tsunami evacuation.  The mother rested in bed, tearful, unable to move due to severe leg injuries.  She hopes a surgery, scheduled about 2 months after her accident, will lead to physical therapy and eventually enable her to walk.

One of the families which received a new house spent a precarious night outside with all of their belongings.  The only food they had was a small bag of rancid chicken bones and a few sprouted potatoes.  The women's mom brought some rice.

I understand that life is precarious, that in a moment there could be a bad diagnosis or a crazy accident or a freak storm.  These kinds of things happen to everyone.  But the kind of life that is precarious a result of poverty or abuse of the land or injustice is different.  This is the kind of precarious which exists widely in places like El Salvador, or Peru.

When we travel from the US and experience the precarious life of children, women and men in   places around the world, how do we respond?  Jesus says that offering the glass of water, sharing a bit of food, and spending time together are good responses.  Supporting our sister churches who do amazing work in precarious communities is important.  But sometimes, it is pretty overwhelming.