Off the Beaten Path: Coffee Stories 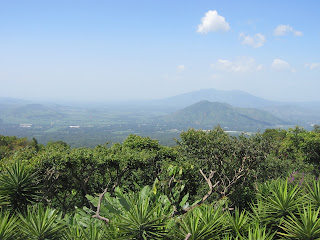 Sixteen of us bumpety-bumped along, shoulder to shoulder as our micro-bus traveled down the side of the volcano.  "One time, I was kidnapped for fun," I told my Salvadoran friends.  "That was how I had learned about a place on the side of the volcano where we can get some food and see some historic equipment from a coffee plantation.  It's called Cafe Miranda."


We arrived at the cafe before lunch time.  The waiter seated us on the veranda outside of the coffee museum, saying that there was more space than down below (where the nice view is), but inviting us to walk around and take photos wherever we liked.  The sounds of young people singing along with contemporary Christian songs rose up from a small building below us.  At first we thought it was a worship service, but the level of laughter and the site of kids in their gym uniforms indicated that we had stumbled upon a group of kids from a Christian school who were on a day-retreat.

Our group was made up of Salvadoran Lutheran University students, a couple of other young adults, a seven-year old, two Catechists from the Salvadoran Lutheran Church, our pastor from the US and her twelve-year old son, a guy from our church in the US and his thirteen year old daughter and me.  We ordered our beverages (yummy hot chocolate for the majority).  It took quite a long time for the waiter to come back to take our food order.  Luckily a nearby playground offered some good entertainment for the younger ones.  The waiter finally came back to take our order, and the two US adults ordered pupusas.  When one of the university students also tried to order pupusas, the waiter said that the whole group could not have pupusas because the kitchen stopped making them at 11 am. The two could have them because they were foreigners. Luckily I had a "Plan B" and we ordered a bunch of appetizers (including mini-pupusas, fried yuca, nachos, and a couple of types of plantains) with a promise to go to the Neveria for ice cream later.

Everyone was happy with the plan, and we sat around chatting about the visit we had just had to the national park at the top of the volcano El Boqueron.  It took a seriously long time for us to get our food, and the students were pretty critical of the poor service, including making jokes like, "Come to Cafe Miranda!  Order today and get your food tomorrow!"  Once we did get our food, it was really delicious, and all agreed it was worth the wait.

After lunch we wandered into the museum.  We paused by the grinding stones.  Some of the students did not know how to use them.  Some did.  Vanessa said that her grandma still uses it, not for corn but whenever she needs to grind leaves or other things to make medicines or creams for their skin.

The hacienda kitchen had two big ovens with flat iron comales or cooking griddles for making tortillas.  As we walked, our friend who is in his fifties said that when he was a young boy he picked coffee.  We strolled past the large metal bean pots.  "There have always been a lot of stories about pickers finding things in their beans, you know, insects like cockroaches or even mice."  He laughed.  "Well, I can tell you that those stories were true.  One time, I got my big tortilla and the cook put a big scoop of beans on top of it and it had a whole mouse head in it.  Really!  But, a cooked animal is a cooked animal, right?  One cooked animal is the same as another."

"Yes," Sonia chimed in.  "I have experience picking coffee too, when I was a little girl."  In the middle of the day when it was time for food we children would shout 'Comida! Comida!' (food!  food!) and we would get so excited.  We got a big tortilla (Sonia showed the size with her hands - like the size of a dinner plate).  The men got a big scoop of beans, but as little children or women we just got a small scoop, and we were disappointed.  But at the end of the day there was a woman who made a big pan of bread, made from corn and cheese, like the quesadilla that you love.  She cut it into squares and we each got a piece.  I looked forward to that.  But, it's true, the plantation owners did not take care of their workers.  They did not clean the beans and they didn't care what we ate."

We took some photos of the artifacts and of the beautiful gardens.  Before leaving, we used the restrooms.  ("Never pass up a flush toilet" is one of our delegation phrases.)  Our pastor noticed a sign in the ladies room - it said that the establishment reserved the right to deny service to people.  What did that mean?  If someone showed up just to use the bathroom but not the facility it could be understandable that the owners would turn them away.  We thought about where we had been seated and the issue with the pupusas, and hoped this was not evidence of something more.

The history of coffee in El Salvador is sadly tied to wealthy barons forcing people off of their land,  to the oppression of a majority of the population, to the massacre of the indigenous people, and to the civil war.  For many, picking coffee for meager pay and eating a lunch of infested beans meant survival.  Many of the youth in our sister church community have more recent experience picking coffee.  When needed, they are called on by their parents to help support their families.  "One time," one of the girls shared, "my little sister and I were picking and she wandered off.  We told her not to do that, but she did it and she got lost.  She was lost for a whole day.  Finally we found her sitting by a log and she was crying and we told her, you can't walk away like that or you will get lost.  My parents were so glad we found her."

Author's note:
Information about historic and fair trade coffee in El Salvador can be found at http://www.equalexchange.coop/history-of-coffee-in-el-salvador