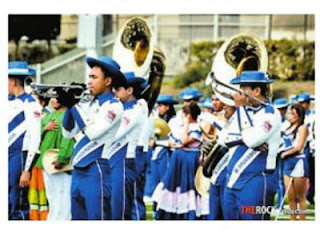 The women were surprisingly sexy, waving and smiling as their Vegas-style head-pieces bobbed with each high-heeled step.  Their short skirts were set off by long trains which trailed behind them.  The band was decked out in traditional blue and white, sporting "sombrero azul" cowboy hats and shoulder-to-hip sashes which proudly said "El Salvador."  The musicians marched in the 2013 Tournament of Roses Parade, and for a few moments the streets of Pasadena were filled with shouts of Viva El Salvador.  The band was followed by about a dozen traditional dancers who were running more than dancing, but they still managed to wave their rainbow of large skirts like giant butterfly wings, and they smiled beautifully for the crowds in California and the television cameras which carried their music and images back home. 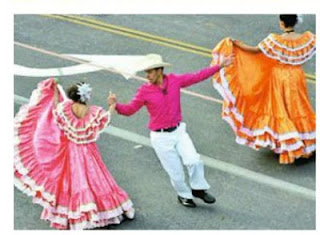 It was a fun and fabulous moment for the band members who had worked so hard and traveled so far by bus to get to the parade.  As a former band parent, I could imagine the parents of these high school kids beaming with pride as they watched from near or far.  Salvadorans and North Americans alike were sending messages out via Facebook:  Did you see the band from El Salvador?  LIKE!

As I was watching and listening to the Banda El Salvador, I thought about all of the different occasions when music, dancing and marching through the streets have brought joyful and fun moments to our time in El Salvador.  The development of folkloric dance classes and music classes in schools and churches has increased greatly in the past five to ten years, which has given kids and youth lots of opportunity to express themselves in a positive way and show off their amazing talents for each other, their parents and their communities. The children who hang out with me will probably never have access to a clarinet or a trombone, but a bucket or an old can will serve as a drum and there always seems to be someone with a guitar, a wooden flute or something to shake.  Music is everywhere and a parade is always a possibility. 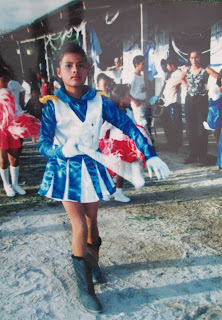 One day, during our very first visit in El Salvador, a little girl named Marta came out of her house wearing a pair of black boots.  "Watch me," she said.  She twirled her baton a little bit in her hand. My friend Greasy said, "Swooooosh?" and made a motion like tossing up a baton.  Marta followed suit and tossed her baton just a little bit into the air and caught it.  "Do your routine," said her sisters.  So, while Marta hum-dee-dummed the music, she marched with her feet and performed her entire baton routine for us.  Then, she ran into the house and pulled out a little plastic bag which had two photos of her in it.  There she was in full uniform and marching in a parade.  She gave one photo to Greasy and one to me.

Congratulations, Banda El Salvador, and to all the little boys and girls in El Salvador who dance and twirl and march and sing. ¡Viva El Salvador!