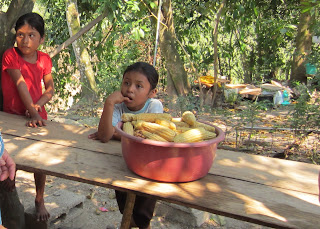 Our very first visit in El Salvador.  These words came carefully from the mouth of our pastor who was a little nervous while preaching in the tiny church in Los Héroes.  We all remember this moment:  the people were crammed into every corner of the space, our sweaty pastor holding an ear of corn out to the crowd and daring to try a bit of Spanish, "corn es vida," and the translator looking puzzled and finally blurting out, "maiz es ... vida" as everyone giggled.

It was harvest time during that first visit.  We walked the pathways of our sister community for the first time, shyly accepting invitations into people's homes as we went along.  "Pase, por favor.  Come in.  Sit down.  Are you hungry?"  We were handed warm ears of corn, warm tortillas, or warm plastic cups full of sweet corn milk.  Corn es vida.

Corn in the field, mostly planted with beans and squash, is the milpa.  An ear of corn is elote - eaten plain, covered in mayonnaise and chile, or drizzled with lime juice and salt.  Maiz is the kernels of corn, wet or dry.  Tortilla, tamal, quesadilla, atol de elote... corn es vida. Corn is life.

Corn is also big business.  In the United States, corn production is carried out by small farmers and large agri-business, is subsidized, is used primarily to produce animal feed, is used to create ethanol, is genetically modified, is shipped around the world, is complicated.  I don't know too much about US corn production.  What I do know is that the people of the corn are frightened.

Corn plants are grass plants, native to Meso-America.  Early people saved seeds of the plants with the largest heads.  Little by little, corn varieties developed.  Different varieties adapted to different geographic zones, different soil types, different climates, and the plants grew resistant to local plagues (insects and disease).  The people of the corn with their wisdom and closeness to the earth developed the culture of sharing.  It was customary for the farmer to walk past the neighbors' fields and to take an ear of corn from each.  These seeds were mixed into the farmer's own saved seeds to create diverse and heartier plants.  Growing corn for food and for seed continues to be the tradition for small farmers throughout Mexico and Central America.

Genetically modified seed from US corporations threatens this life cycle of native corn.  Genetically modified seed produces a field of uniform corn, which is not adapted to diverse geography and local plagues. To grow, it requires application of chemical fertilizers and chemical pesticides.  Seeds cannot be collected and saved because sometimes they do not produce new plants.  Collecting them and saving them sometimes violates the intellectual property rights of the corporation.

A few years ago, a family in El Salvador received seed to plant a crop which had been destroyed by a flood.  The family was hungry.  The father told his wife to take some of the seed, to grind it and make it into tortillas to feed their five hungry children.  The family became sick.  Two children, ages 10 and 12 died.  The seed was coated with a pesticide. 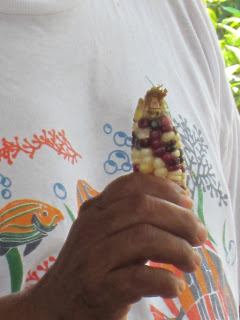 I recently returned from a visit to Palenque, Chiapas, Mexico.  In town, store after store advertised agricultural chemicals.  The town smelled of fertilizer and pesticide.  Miguel told us about his efforts to produce organic corn in his field, to discontinue slash and burn practices in his community, to use companion plants with his corn to produce nitrogen in the soil, and to encourage neighboring farmers to discontinue using chemicals.  He showed us his worm compost.  He told us about farmers with cancer.

For the people of the corn, corn should not be death.  Corn is life.