Off the Beaten Path: Church-Hopping in San Vicente 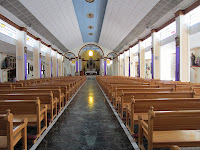 Our strategy was to navigate by heading toward the churches.  As we left the central square, we crossed the street and headed into our first church of the day, the Cathedral of San Vicente.  The church was constructed in 1943 and suffered a nearly complete collapse in the 2001 earthquakes.  The sanctuary was reconstructed in a style to fit the original facade.  It was very cool and peaceful inside.  We sat for a little while.  St. Vincent Abad, the community's patron saint, was killed in the 7th century for defending the beliefs put forth by the Council of Nicea.  The plaque on the wall indicates that though his body was beaten, his soul was lifted to heaven by the angels. 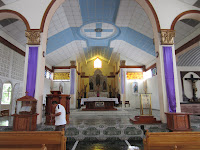 The faith of believers, that they will be lifted up and carried to heaven by angels seems to be woven into the souls of those who live in the shadow of the San Vicente volcano.  I thought back to a few short years ago when tropical rains brought a torrent of boulders and mud roaring down the side of the volcano of San Vicente.  People were crushed.  People were swept away.  We walked with families who were grieving, yet their faith was strong, bolstered by the miracle stories of a wife and children being carried along the top of the mudslide safely into the second story of a house and of a grandmother lifted by angels who deposited her and her wheelchair safely into the top of a palm tree.

Stones and relics and treasures from the original cathedral dot the walls and the altars of the new interior, concrete reminders that God is always busy resurrecting God's creation. 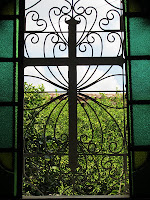 We quietly left out the side door, and found ourselves stunned for a moment by the bright sun, the heat of the day and the rush of people around us.  We decided to walk uphill, toward a church we had seen in the distance.  This route took us straight through the marketplace.  The streets were lined with shops which were completely hidden by the rows of outdoor booths which sold everything from motorcycles to plastic toys to shoes.  Of most interest were the women selling underwear.  Some had a few panties laid out on the sidewalk, seemingly shocked that we would pass up such great bargains as we politely said "no, thank you."  Some were covered from head to toe with their wares - well, "under-wears".  Bras in all colors hanging off of one arm, nighties and slips on hangers looped over their shirt collars and apron strings, heads covered with sombreros made from twisted towels with undies hanging off of every side.  If we could have taken a photo of this without being disrespectful, we really would have.  We gulped down the giggles and politely said, "no, thank you."

One good tip for market-goers:  look out for the buses.  It's difficult to express in words or in photos how really narrow these streets are.  The Salvadorans were very good at warning us to step to the side (we were the ONLY North Americans in town that day -- so we attracted our fair share of attention and guardians).  When you see a bus up the road, the best plan is to find a clothing stall with some bare pavement beneath the hanging clothes, and dive in.  Then wait to get up close and personal with a big bus wheel.

We meandered through the booths and a few of the shops before finding our way to the indoor market.  This was an unexpected surprise!  The indoor market was HUGE!  The first few stalls near the entrances sold toys, candy and small items.  Further in, we looked at each other with one question...WHAT IS THAT SMELL?  A little more exploring revealed the answer - meat juice smeared around by flip flops on hot concrete.  Raw chicken sat in its natural juices dripping onto the floor.  Raw red meats oozed their own aromatic red liquids. We tried to be cool, nonchalant, non-horrified-gringas.

Soon we came upon literal mountains of dried fish fillets.  "Did you catch these yourself?" we asked one of the vendors.  He was an older guy with a good smile and jolly attitude.  "Yes, I did, me and my wife."  We talked a little bit about fishing and thanked him for sharing his story with us.  Beyond the raw meat rows were small restaurant counters where people could order and eat prepared foods.  None of it seemed very appetizing, and really there were not too many local folks checking it out.  Deb and I agreed that of all we saw (and smelled), the dried fish held the most promise.

We were happy to exit the indoor market, but happy also that we had experienced it and learned a little bit more about the struggles which Salvadoran families have in finding healthy and safe food.

After exiting the market, we headed up past a residential zone and quickly found our destination - another church!  Iglesia El Calvario (Calvary) was built in 1784, although because it was closed, we could not learn much about the current structure.  From the steps, we looked back upon the way we had come, and could see the clock tower in the distance.  We decided to take a different route back toward the town square, where we would find a place to eat lunch.

Typically, small cities and towns have several good lunch spots near the municipal buildings off of the town square, and San Vicente did not disappoint.  We checked out the menus at a few places, which consisted of walking past the different items on the grill or being kept warm near the griddle.  We settled on two important criteria for lunch:  availability of bottles of cold water and good vegetarian options.  We chose a spot, sat at an outdoor table, and the kind staff brought us our food.  The food was absolutely heavenly -- relleno de ejote (green beans nestled in cheese, covered with an egg coating and friend).  We watched the midday world go by as we relished the warm cheesy goodness and drank two huge bottles of water each.

After a good lunch and a good rest, it was time to head off into a new direction.  This time, we headed downhill, hoping to find the church of the Virgin of El Pilar.