January 17, 2014
January - a time for snow-covered everything, a kitchen full of repeatedly zipped and un-zipped suitcases, and dreams of Missions of Healing gone by.  Literally, dreams about Missions of Healing.  This is the time of year when every day includes emails in Spanish to and from El Salvador, final orientation meetings for the US team, tweaking the itinerary based on a need here or an emergency there, and squeezing letters and cards from one sister church to another into already stuffed suitcases.

So, it is not surprising that days spent with Mission of Healing prep sprinkled into every nook and cranny of spare time and truthfully gobbling up some big chunks of time, I spend some nighttime hours and daydream hours with visions of healers and the stuff of healing dancing in my head.

This week, I have been remembering Señor Tomás.  Señor Tomás is legendary, at least in El Salvador.  One only needs to mention his name in our sister church community or in the Bishop's presence, and there is a reverent pause and whispering of his name, "Ah, Señor Tomás."

Several years ago, when our Mission of Healing team from the US was very small and we were looking for healers to join the team, my friend Greasy mentioned the possibility to her guitar teacher, an older, red and white-haired guy who scraped up a living by teaching lessons and playing a couple of nights a week in a small lounge.  He had spoken of his ability to heal as a Quigong practitioner and teacher.  We didn't know anything about Quigong, but he seemed like a gentle spirit with a humble and amazing ability to play guitar.

"We don't think that matters," we responded.  We were not sure what Tom believed, but he seemed eager to serve and be surrounded by a bunch of Lutherans, and we thought from the beginning that perhaps God had a mysterious hand in bringing Tom to the team.

Tom had trouble gathering the funds.  He missed a few meetings.  Would he really go?  We were not 100% sure until he boarded the plane.  Our little team of seven was ready for action.

We were a diverse group:  a nurse practitioner and her husband, our lay-pharmacist; a Lutheran Volunteer Corps young woman who would work with kids; our "utility guy" named Curt whose name could never be pronounced (Coooooort); Greasy, our translator; Grubby (that would be me), also a kid-worker; and Tom, who became Tomás and ultimately Señor Tomás.

This mission of healing was "back in the day."  The center of operations was the community center in our sister church community.  The pharmacy was made from a big hunk of plywood sprawled over a couple of saw horses.  The queue-line of seats consisted of benches from the church which we laid out in a labyrinth in the middle of the room. Salvadoran physicians and nurses set up tables for eye exams and triaged all the participants.  Gloria gave people numbers and managed the crowd. The kids' area was outside, in an alcove in front of two potties without doors.  The exam area had been up-graded from the year before when it consisted of the stage cordoned off by a black plastic curtain, to the back room of the neighbor's house.  The spiritual and energy-healing (Quigong) area was in the "quiet" front room of the house.

Kids were everywhere, waiting for their check-ups, waiting for their grown-ups.  We spread a blanket on the dusty floor and played games, and strung beads.  Every empty piece of floor became a coloring table.  We were all covered in dust and sweat and more dust.  Every now and then, we paused to adjust our suitcase-and-masking tape barrier around the pharmacy, trying to keep the dust off of the meds.  Every now and then, we would hear a few words about Señor Tomás.  Something good must have been happening in the house next door.  Every now and then, small musical streams would float through the air and the loud din of voices would quiet slightly.  We would look up to see Señor Tomás quietly sitting in a corner, head bent, strumming his guitar. 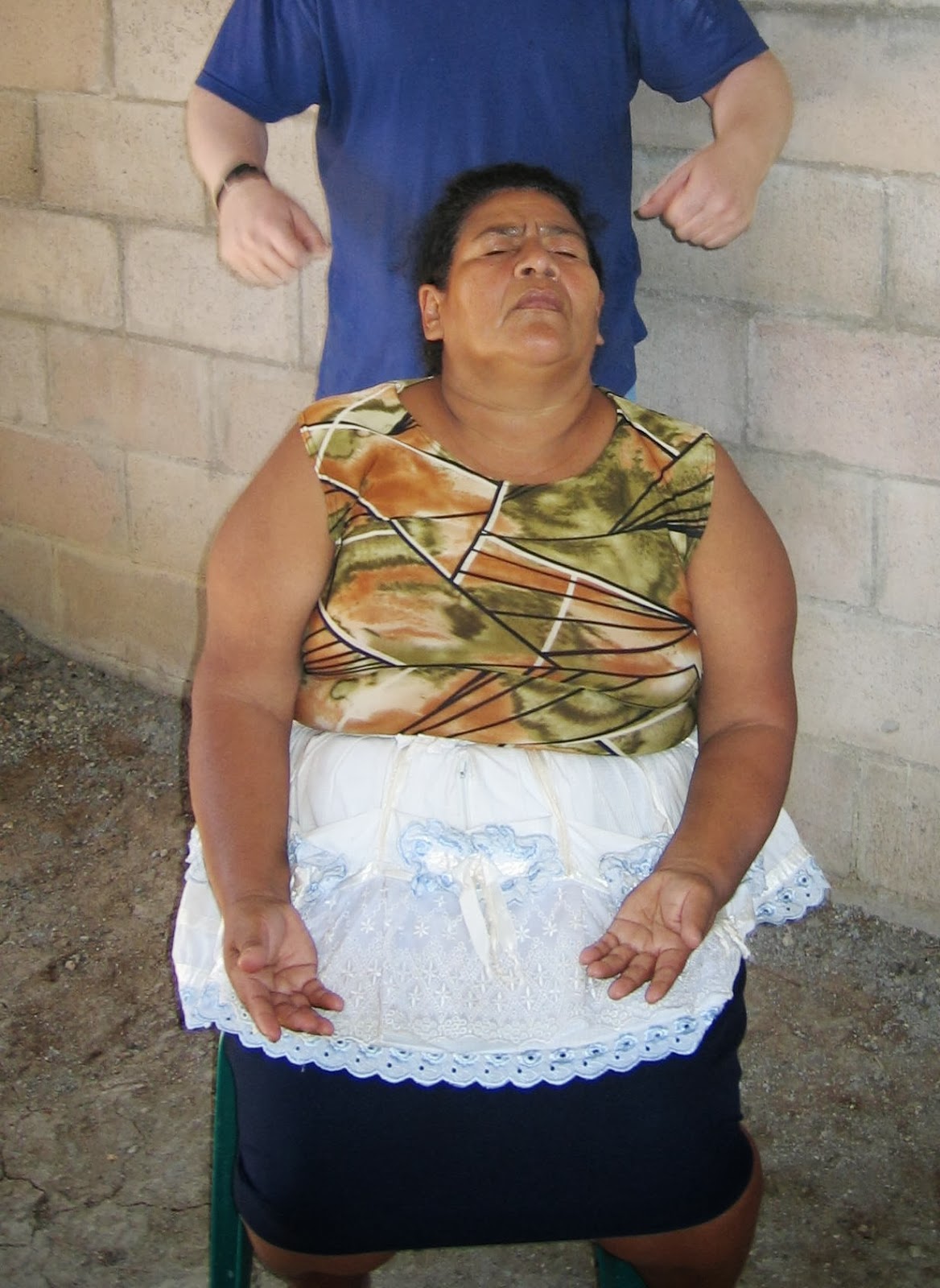 We who were kid-workers never really had time to go over to the house next door.  Greasy did.  She sometimes was called away from the sweat box behind the black curtain to translate a story for Señor Tomás.  He would listen.  People would share their deep stories with him.  He would not say hardly a word, just a steady,  "Close your eyes.  Put your feet flat on the floor," when he was ready to work.  His hands would move around the person's head.  He would walk and move around the person's chair.  Invisible energy moved through the air.  People felt it.  Headaches and heartaches were relieved.  Señor Tomás got tired.  He would sit and play his guitar to regain his energy.

Bishop Medardo heard of the work of Señor Tomás.  Sometimes the bishop stands at the podium before preaching or the altar before presiding and rubs his hands together.  "Hot hands," he calls it. The Mayans called forth invisible energies as they entered into their ceremonies.  The bishop talks about Señor Tomás and the Mayans.

In my kitchen, the suitcases are waiting for a few more letters and a few more gifts and a few more toothbrushes.  Inventory sheets need to be typed, emailed out for suitcases in other people's kitchens, and printed for the suitcases in my kitchen.  A few suitcases rattle, filled with bottles of anti-biotics.  Others are weighted with donated art supplies.  A few carry fabric and notions for the girls-at-risk sewing program.  Five thousand toothbrushes are packed here and there.  This is the stuff of the Mission of Healing.