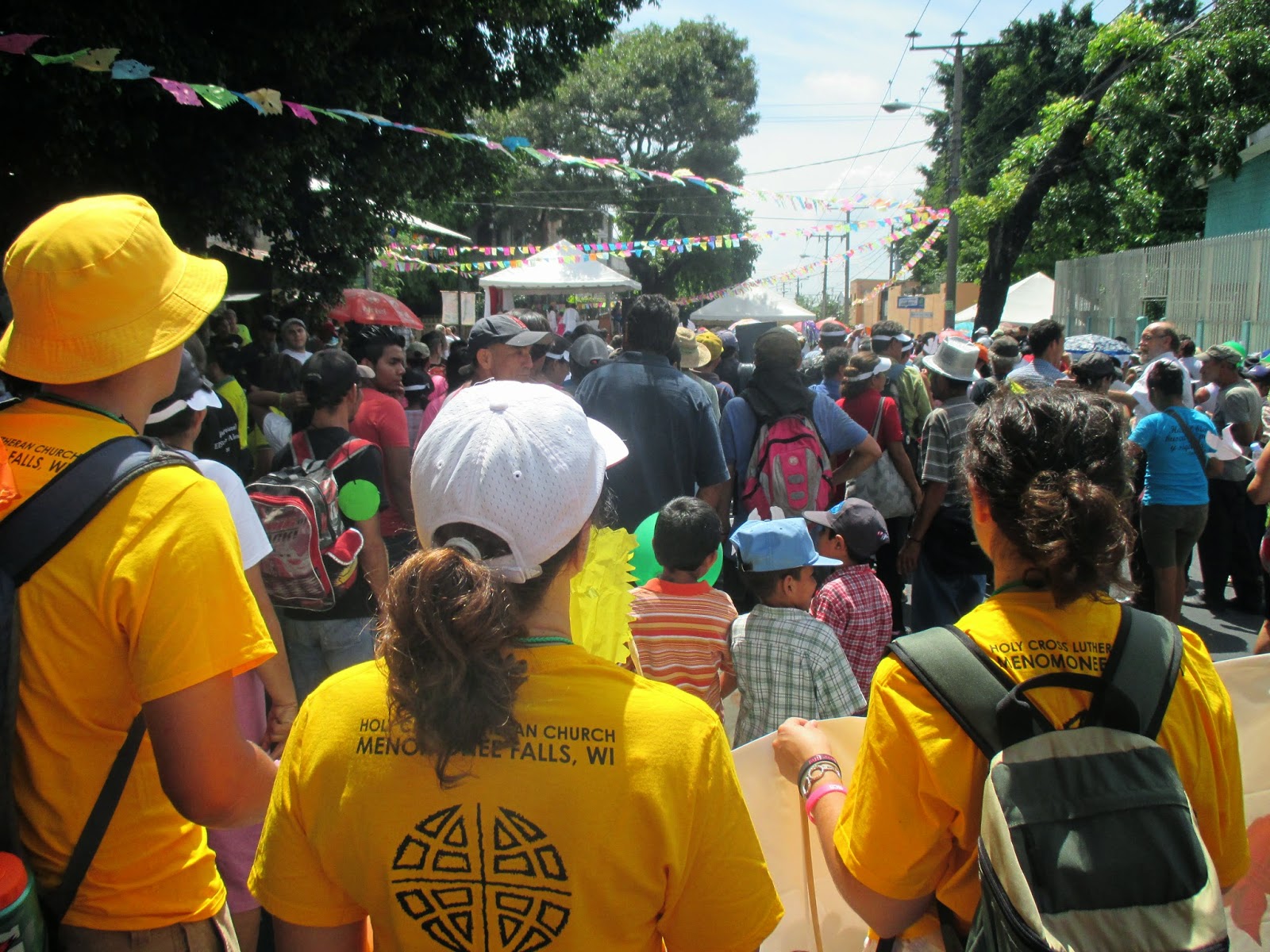 After marching with flags, balloons and a few thousand other Lutherans through the hot, sunny streets of San Salvador; after listening to speeches, admiring community banners, honoring the king and queen of the national youth group, singing a couple of songs and clapping wildly for the youth dancers; after listening to the story of the Subversive Cross; after meandering over to Pizza Hut for a quick lunch and a bit of luscious air conditioning ... we were ready to celebrate corn.

Every year, the Corn Fiesta is celebrated on the afternoon of the Anniversary Celebration for the Salvadoran Lutheran Church.  A few years ago, the planning for the Corn Fiesta was turned over to the youth.  Maybe this is a way in which to make an old tradition seem fun for the younger crowd.  As the afternoon sun baked the pavement, gringos piled out of their little buses and Salvadorans emerged from their community trucks and cars, and headed toward the covered area near the big portrait of Jesus.  People gathered in the circle of plastic resin chairs. There was a little bit of waiting-around-time, an opportunity to meet up with delegations from different parts of the US and Europe.  You never know who you might meet at the Corn Fiesta!  This year:  Bavaria, Washington DC, California, Minnesota, and Wisconsin.

Bishop Gomez traditionally begins the fiesta by recognizing the Mayan ancestors' cultivation of corn and their story of creation in which humans were formed from corn.  Thanks and praise were given to God for the harvest. A drought has destroyed the corn crop in about half of the countryside.  It seems difficult to celebrate when the food situation is so dire for so many, and might explain why several Salvadoran communities were not able to participate in the day's events.

The youth band from Soyapango provided dance music - not your average corn-fiesta-folk-music, but some pretty hard-core rock.  Refreshments were served:  the central moment of the fiesta, when each guest receives a hot ear of corn wrapped in a small white napkin and rich atol de elote (corn milk) served in a styrofoam cup.  As we sat in a patch of shade munching on the corn, someone commented, "This corn is dense.  It really fills you up.  It's a meal."  I think that pretty much describes the role of corn on the Salvadoran table...whether eaten off the cob or as tortillas or tamales, corn is a high-calorie food which fills you up.  Salvadorans are people of the corn.

Most of our group loved the corn milk.  Seriously, these particular Lutheran Church women make the best corn milk I have ever tasted.  It is smooth, not chunky, with real cinnamon and no floating corn silk. My opinion aside, one of our guys just could not drink it, "I just don't like this stuff."

His comment made me think about the previous August.  During that trip, our delegation spent a lot of time visiting families in their homes.  Everywhere we went, as a gesture of hospitality, families offered us plastic chairs in the shade, boiled ears of corn from their milpas, and styrofoam cups full of steaming atol de elote.  We spent a lot of afternoons picking corn silk from our teeth and sweating our way through hot cups of corn milk.  Near the end of the week Pastor Santiago whispered in my ear, "The group is really eating all the corn!  I am surprised.  Are they all OK?" We just had to laugh about the corn and corn milk which was brought out everywhere we went!  We were always so full!   I did write down one comment in my journal from the last day:  "It's just so hard to drink another cup of this stuff you have to chew!"  On the next page is a big stain labeled with the words, "Julia's corn was here."

Like most people in the Americas, I have a relationship with corn.  When I was a kid, there were a couple of weeks every summer during which we ate corn for lunch and corn for dinner, ears of corn drenched in butter and salt.  We purchased bright yellow sweet corn from local farmers - small ears for the kids and big fat ones for Mom and Dad.  Sometimes the corn would be a little tough and my dad would say, "This is field corn."  We chewed our way through it, hoping the next kettle-full would be tender and sweet.  We froze corn for the winter.  Today, the corn at my grocery store is pale yellow and white and every ear looks the same.  I buy corn from small farms.  I think about genetically modified seeds, mono-culture farming, corn production for animal feed, ethanol production and the impact chemical farming practices have on the environment and our health.  I have learned some things about corn production in the Americas.  I need to learn more.

The Mayan ancestors established corn as the source of daily bread, as the stuff of survival for the people of El Salvador. The Corn Fiesta brings honor to this simple grain which provides Salvadorans with calories and full stomachs. At this year's fiesta, after the refreshments, the youth drum corps from the bishop's church played some high-energy music.  Dancers gathered to step and jump to the rhythms.  It was a great testimony to the rich energy which corn provides for the people.

The Corn Fiesta happens on a very full and busy day, both for the Salvadorans and the visiting delegations.  The fiesta provides time to give thanks and celebrate and taste and enjoy.  It is an honor and a blessing to share in the celebration.  I believe it is also a responsibility to reflect upon the experience and upon our own relationships with corn.

During this year's visit, our delegation ate corn with a family at an organic farm where Bishop Gomez provided seeds that had been saved by indigenous people.  The site provides classes for farmers to help them move away from chemical-dependent seeds and practices.  There, we learned about compost and natural insect repellent -- knowledge we can apply in our own gardens in the US.  At this year's fiesta, we ate and drank corn which was grown in a large organic garden, tended by students and adults and which produces food for the meal program at the Lutheran homeless shelter.  This garden is supported in part through Lutheran World Relief.

When we eat corn, when we eat animals which eat corn, when we use products made from corn, it is good to ask ourselves, where did the corn come from?  how was it grown?  how did its production impact the environment?  how did its production impact small farmers and family farmers?  Whether we are connected to the Mayans through ancestry or geography, as Americans we are all people of the corn.