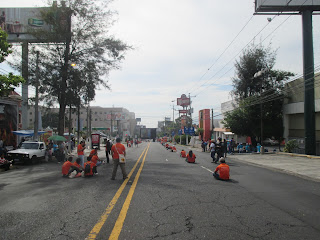 We woke to the sound of music in the air.  Soon a military helicopter buzzed closely overhead,  drowning out the singing.  The day had arrived:  on this day Archbishop Oscar Romero would be officially beatified by the Roman Catholic Church.  For those who receive inspiration from Romero's walk of faith, this day would serve as a celebration and recognition of the life and sacrifice of the man who is already known as Saint Romero of the Americas. 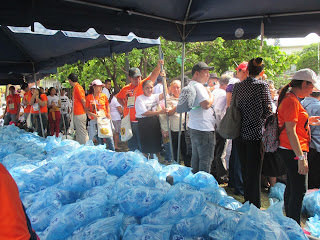 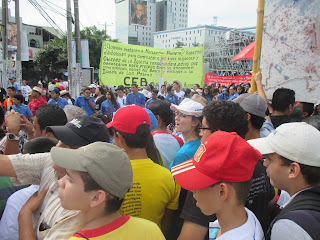 We began walking down Paseo General Escalon toward the El Salvador del Mundo plaza a few hours before the beatification mass would begin, allowing plenty of time to navigate the 3 km journey and predicated large crowds.  The road was closed to traffic.  Up ahead we could see teams assembling a big screen in the middle of the road.  It seemed a bit last-minute to be doing that work so close to start time, but given the deluge of rain that fell the night before, maybe it was wise to procrastinate.  As we descended the hill, we noticed a few hopeful, opportunistic entrepreneurs set up along the sidewalk.  Posters, t-shirts, candles...Romero would be astounded at the grand multitude of his image portrayed on everything from baseball caps to balloons.  On the light poles and street signs along the way, the city had posted welcome signs in Spanish, Italian, English a fourth language we didn't recognize. 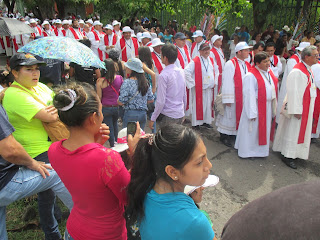 As we got a little closer, lines of orange-shirted volunteers greeted us...every one of them greeted us!  Many had shirts that said "bilingual volunteer."  As we approached the next big screen, a little line of watchers sat on the pavement watching a documentary about Romero.  The spaces were ready for big crowds and we wondered where the big crowds were! 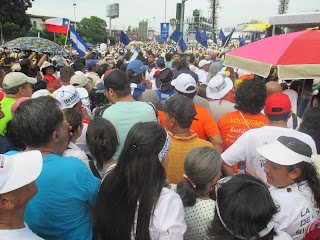 Nearer to the Salvador del Mundo plaza, we found crowds.  Our initial idea had been to hang out near the periphery, but once we got to the crowd, we wanted to dive into the experience.  Actually, a better description would be "sucked in."  The crowds were tight!  There is this great dynamic in a crowd of such size and density:  whenever a little hole opens up and one person starts moving, it creates a stream for others to follow.  We perfected our technique of streaming and ended up near the line of clergy who would soon process to their places near the stage.  We made a game of "can you get a shot of a cardinal?" as we caught an occasional scarlet-capped head approaching.  We were near to the water tent, the staging area for huge piles of bag water.  Upon closer inspection, we noticed each bag featured the face of Oscar Romero.

We decided to move when another stream opened up, and we wedged ourselves between a cement wall and metal gate to escape the crowd.  We headed uphill, plotting out a route to get around the crowd and maybe get to a spot facing the stage.  We had no delusions that we would get close.  We were a little group of three, so fairly mobile, and one of us (that would be the Salvadoran Lutheran pastor), sweet-talked a guy with a gun into letting us go down a closed street back into the crowd.  The determined pastor elbowed his way in, creating his own stream and pretty soon we were stuck.  Solid people.  No more moving.  We could see the stage in the distance and make out images on a couple of big screens.  We had arrived:  the complete Beatification of Archbishop Romero experience, and it was beautiful. 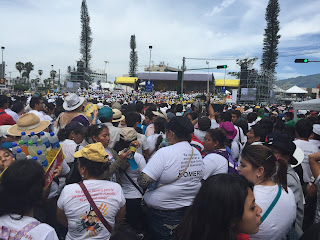 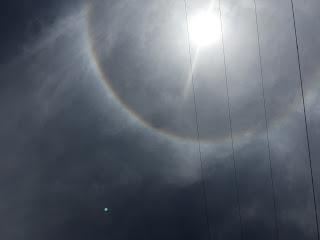 As mass began people sang -- really sang -- songs from the Salvadoran folk mass.  The crowd was faithful and enthusiastic.  Every now and then a stream would open up as vendors passed through calling, "Aguaaaa, Gaaay-tor."  At first thought, it might seem disrespectful to be pushing through a worshiping crowd selling water, Gatorade, fried chips and ice cream, but it was really hot out there, and there was no way to move out to get food or drink.  My husband commented that he thought Romero was probably more present right here with us, in the crowd, with the people who had to sell bottles of water for $1 so that they could feed their families for the next week.  Less so perhaps on the stage with the fancy ones.  That thought was reconfirmed when, just as the beatification pronouncement was being read in Latin from the stage, a halo formed around the sun.  "Romero esta aquí," the crowd gasped, "Romero is here."  Everyone had goosebumps. 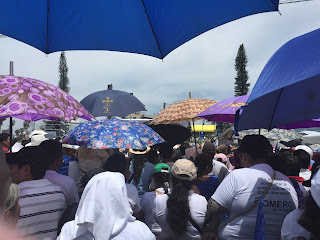 The mass continued, and we stayed for most of it.  As Holy Communion was being organized for distribution, a small stream of people made its way to the side of the road, and eventually we made it out of the crowd.  We headed up the same street that had led us to the crowd, deciding that lunch would be our next destination...