Off the Beaten Path: A Little Restaurant on Top of a Hill off of the Main Road

April 29, 2016
So, you remember that time when you were traveling from clinic to clinic with a small delegation to express your gratitude for the support which the medical professionals provided during the big health fairs that the Lutheran Church sponsored in different communities and it took a little longer than you expected and suddenly it was 2 PM and you really needed lunch and you had no idea where to go and you didn't really see any place that was open?

This is a moment when you realize how important it is to have a driver who knows about secret hang-outs were kind people cook good food. 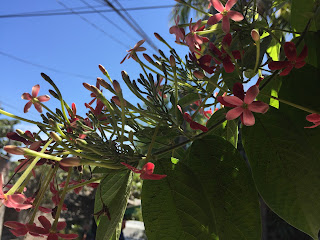 We were near Nejapa, the site of our next meeting.  Our driver took a turn off of the main road onto a small road and then onto another small road.  We parked at the top of the hill.  In this dusty, semi-industrial, just-off-the-truck-route neighborhood, we were surprised by a nice little view framed by cute little flowers.  We were greeted at the door by a nice older guy, and were led down a couple of steps from the small family space to a surprisingly large dining space. 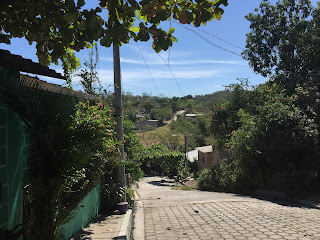 We sat at the long table in the center of the room.  There were small tables around the perimeter of the room, and a huge, flat screen TV mounted on one wall.  We could imagine big groups of fans crowded around the tables, enjoying their local brew and yelling at the TV during a big soccer match.

Our driver told us that the fish would be really fresh.  The fried fish was absolutely fresh and delicious, as were the fries.  We relaxed, enjoyed our food and caught a bit of news on the TV. 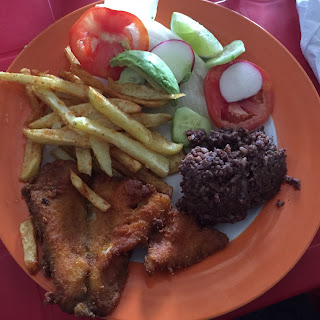 We stopped by the front desk to pay our bill, and asked a little bit about this location, hoping to learn enough to remember how to find this place in case we were not with our trusty driver.  The older guy told us that the railway ran nearby, so this place is known as the place near the old railway.  He pointed to a photograph from the late 1970's which showed reporters taking pictures of the old train.  Much of the rail system was destroyed during the war, and travel by rail was suspended by the national government in 2002.  There currently is a small commuter line that runs between Apopa and San Salvador.  The restaurant owner remembered fondly that back in the day, photographers and rail enthusiasts would come to this spot near Nejapa to watch for the trains. 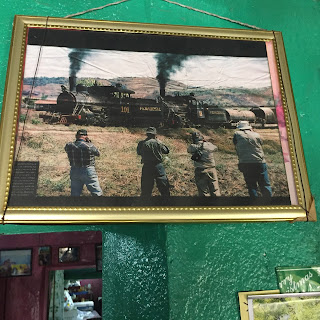 I asked permission to take a photo of the front of the restaurant, and the man and his wife said "sure."  When I asked if the two of them would like to be in the photo, they smiled just a little and agreed (although the chef said she did not exactly look presentable after cooking in the hot kitchen).

As we started our way back up the hill, I noticed a big poster on the front of the building promoting happy hour on Thursdays.  A paper sign was taped up near the door, informing customers and neighbors that chicken soup (made with corn-fed chicken) is available on Fridays.  The big pot of soup was sitting on a small table by the door.  Our driver told us that it is very delicious. 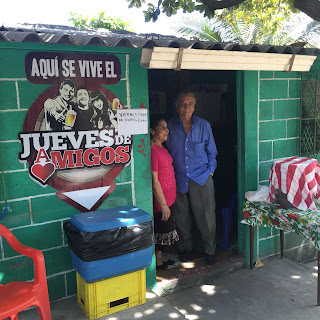 If you find yourself near Nejapa in search of a delicious meal, and a quiet and comfortable place to rest, at least on nights other than Thursday and perhaps not during a big game, you can probably ask around town:  How do you get to the place outside of town on the top of a hill, with delicious fresh fried fish and chicken soup on Friday...I imagine this little gem is more well-known than you might expect.  Don't forget to mention the photograph of the train near the entrance.