Off the Beaten Path: Warm Welcome in El Paisnal

August 23, 2016
It was a quiet February morning in El Paisnal.  We had stopped by the new health clinic on the outskirts of town to greet a few friends.  The clinic sits directly across from the town cemetery (which upon retrospect is a bit humorous and disconcerting).  Sometimes the beauty of an archway, colors, shade and sun, and a random dog cat the photographers eye.  We snapped a few photos and then decided to "be tourists" in a town which we thought we already knew quite well.

Seasoned veteran pilgrims and newbies alike, on journeys of faith and history, frequently visit El Paisnal.  The town located just west of Aguilares holds the legacy and the remains of Father Rutilio Grande, who friends have told me was "the best priest they ever knew."  Father Rutilio was murdered along with an old man and a little boy as they traveled on the road between El Paisnal and Aguilares.  This horrific event brought the violent oppression and actions of military death squads more fully into public consciousness just prior to the "official" beginning of the Salvadoran Civil War, and brought forth a recognition in Archbishop Oscar Romero of his calling as a bishop for a suffering people.  A small monument stands by the side of the road, and the three bodies are interred in the floor of St. Joseph's Catholic Church in El Paisnal.

So we wandered the familiar streets.  Children were in school.  People were working.  It was peaceful and wonderfully surprising!  New public gathering spaces invited us to sit, rest and take in the symbolism in brightly painted murals.  A new sports complex with very fancy artificial turf on the soccer field has covered bleachers and more murals.  Near the soccer field, a tourist kiosk explains the history of the town, the story of Father Rutilio Grande and the places of interest.  As we paused to take photos of a new statue featuring Monseñor Romero and Father Rutilio (placed at a prominent point near the entrance to the center of town), a young man walked up to us and asked us where we were from.  He is the director of a local foundation which is working to preserve the history of Father Rutilio's life.  He and the local mayor's office are working to prepare the town for a hoped-for celebration:  the beatification of Rutilio Grande and the sanctification of Monseñor Romero.

Can you imagine what that event could bring to the small town of El Paisnal?  For example, perhaps, a visit from Pope Francis.  Yes, this is the hope.  One grand celebration for two beloved, charismatic men of God, role models of faith.  Whether you identify with the Roman Catholic tradition, the Lutheran tradition or any Christian faith community, the life and witness of Father Rutilio and Monseñor Romero are profoundly inspiring and people of many faiths and nations could potentially descend upon this tiny town.

We were invited into the mayor's office, where we were warmly welcomed and treated to sweet coffee and a rest in the air conditioning.  Various people met with us, sharing promotional materials, posters, and information about the movement to record Father Rutilio's life story.  Imagine our surprise when we were greeted by a young woman - a friend, who had graduated from the university with help from a scholarship program (our ELCA Synod is a companion with a local Catholic resettlement community named "Rutilio Grande" and has supported education in that community since shortly after the Peace Accords were signed).  This young woman works in the mayor's office, and proudly shared a little bit about a new program of tourist guides who were being trained to assist visitors in the town.

We were impressed.  Seriously impressed.  This small town is getting ready for something big.  The strong yet humble sharing of community pride and the unbounded gestures of hospitality made our visit one of the best visits we have experienced in any place at any time.

Fast forward six months.  In August, my husband, a friend and I decided to drive up to El Paisnal to go to their corn fest.  We noticed a promotion of the festival on the Facebook page of our synod's companion community, Rutilio Grande.  We hunted down a parking spot and arrived in the center of town at the same time as the marching band.  A food court and small booths with local products ringed the streets around the mayor's office building.  Walking around amid all of it were young people wearing bright blue shirts with white lettering on the back which said "tourist guide."  We noticed a young woman in super tall spiked black heels walking tentatively on the cobblestones.  She wore a crown, carried a scepter and the words on her white satin sash read, "Queen of Tourism."  Looking down at my sport skirt and hiking sandals, I thought maybe the black heels did not exactly represent what most tourists have on their feet.

We were invited by a gentleman to go into the mayor's offices, where "there are really nice bathrooms."  We did not really need bathrooms at the time, but could not turn down the lovely gesture.  We were ushered upstairs to a big open room where we could rest, use the facilities and marvel at the display case of awards earned by community government offices and citizens of El Paisnal.  In a few minutes a young man came up and introduced himself - the same man whom I had seen in February!  He remembered me too and shared a quick summary of his work with my husband and friend.

We went back outside and looking for chairs under the canopy were suddenly greeted by the President of Community Rutilio Grande.  He found us some chairs.  We watched local dance groups, heard a history of the town and marveled at the candidates for the Corn Queen.  Two little girls came up to us carrying ears of corn and Styrofoam cups filled with warm atol de elote (corn milk).  They said, "These are for you from Community Rutilio Grande."

We nibbled the corn and sipped the atol and snapped pictures of each of the candidates as she modeled her dress, shoes and accessories - all adorned with multi-colored corn grains, corn leaves, corn flowers, corn silk ... anything from the corn plant.  While the judges pondered their selection for queen, we wandered around the new parks, taking in the beautiful murals and marveling at the bright blue sky.  A little while later the queen was chosen, and she will represent El Paisnal as the Queen of the Corn for the next year.

We ate lunch in the food court, enjoying grilled chicken, beef, rice and beans, chirmol and a cold soda.  We took a walk around a couple of blocks, passing by the local school and admiring people's gardens.  The vendors were packing up their wares, and we headed back to the car, having had a fun, relaxing, educational, beautiful day. 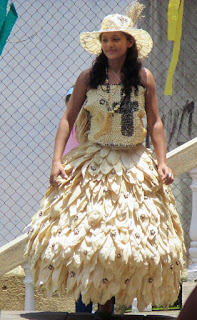 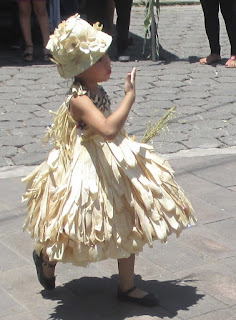 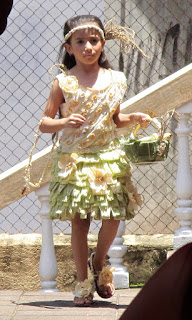 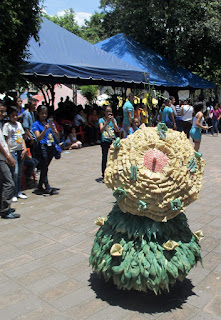 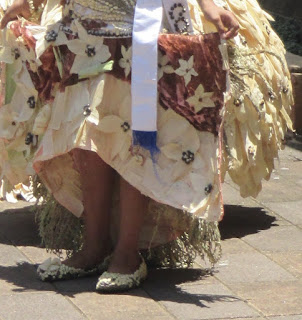 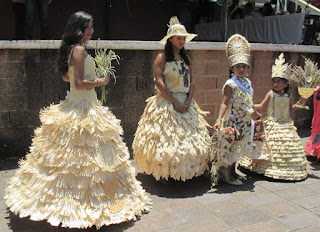