September 10, 2016
We finally arrived in Cinquera, having passed through a great deal of road construction.  The slow going allowed for story-telling and quiet time.  We peered out the small windows of the micro-bus as workers raked the soil, spread the gravel, built the forms and formed the curbs by hand.  In the background, breaks in the trees revealed breath-taking views of Lake Suchitlán.  At one point we saw a little cement mixer - the lone piece of mechanized equipment along the winding, mountain road.  A paved road with curbs will make this drive much safer, but an influx of tourists might also change the quiet aura of forest and story that fills this place.

We emerged from the micro and stretched our legs next to the town square, across from the church.  We were a small group of Salvadorans and North Americans.  Papa gasped, "There was nothing here when I left, nothing here."  Papa was the only one of us to have been here before.  He had worked here near the end of the war, bringing families home.

The repopulation of the town of Cinquera is recounted in a 2011 film documentary entitled "The Tiniest Place."  The town was heavily bombed, and in 1980 all of the families fled the area.  The town remained abandoned until nearly the end of the war in 1991, when 6 or maybe 15 families returned.  When they arrived, they found nothing left of their town.  They stayed to rebuild the town, and to rebuild their lives.

The stories we heard were not told by historians or researchers.   We listened and observed and walked beside Papa, the friends who came with us, and the people of Cinquera.  We walked across the town square to the church.  Two rusty ordinates stand partially imbedded in the soil - a memorial to what took place here.  We walked up the hill to a small museum, where a young woman gave us a tour.  She told us of the indigenous heritage of the people of Cinquera, and the importance of the Lenca culture here.  "Cinquera" is a Lenca word meaning rock, or hill, or grinding stone.

The first room was filled with photographs of the ancestors.  Papa walked from photo to photo, reading every description.  The other Salvadorans were drawn to the artifacts and posed for photos near the pots, jars and comal (cooking griddle) made from clay.  The women moved excitedly from item to item, remembering how they used these things in the past (less than a generation ago!).  The giant tree stump was hollowed out to create a mortar used with a large wooden pestle for pounding rice to remove the hulls.  "Our first car!" as the women ran over to the ox cart.  "My first stove!" cried Gloria, touching the comal.  "And here is the refrigerator," said Mari as she pointed out the hanging mora bowl (it looked like a hanging planter with a bowl made from the hard shell of the mora fruit).  Papa continued on quietly, studying and remembering.

The second exhibit room held artifacts from the war:  guns, bullets, clothing and photos of lost family.  "Everyone here has lost someone," our guide said.  She had lost her grandmother and her uncle.  In the rubble of the church, returning refugees found a carved wooden figure of Jesus - a survivor from the 18th century, the guide told us.  The original mechanism from the church bells had been rescued from the rubble of the bell tower.

The guide invited members of our group to share their stories and memories from the time of the war.  Zoila remembered when it was dangerous to sleep in her home.  At one point it was so dangerous that they had to leave.  She was alone with her 7-year old son and he got a fever.  There was no medicine.  He died.  "Thank you for sharing your story," Debbie later whispered to Zoila.  "I live in my story," Zoila said.

The tour ended with a story, "El Caballo de Martín" (Martin's Horse).  At one point in time, a decision had to be made.  The guerrilla fighters only had one horse left for transportation, and they had no food.  Even the horse was almost skin and bones.  The decision was made, the story was remembered.  "We honor the life of Martin's horse, who gave his life so that the troops would live."

Much later in the day, after a very long walk in the forest, Zoila carefully laid down a stick along the side of the road.  It was a stick that she had picked up and used as a walking stick on the steep forest hills.  As she laid down the stick, she said, "Gracias amigo palito, thank you, little stick, you served me well on the long climb through the forest."

After concluding our museum tour, we walked around the town a bit.  It is a tiny place, dotted with small homes and little businesses.  The people are strong and kind.  They want to share their story.  They live their story. 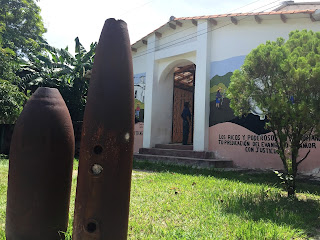 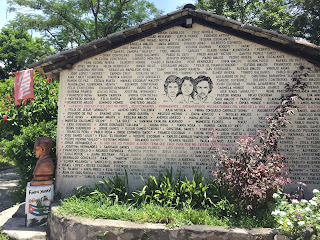 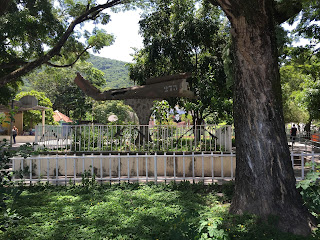 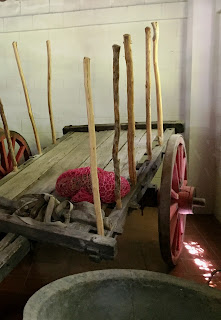