May 15, 2017
On May 13th, our little team headed up to our sister church to meet up with the youth group and do a workshop on the theme of migration.  This is the same workshop that my husband has been leading around and about - an introduction to US Migration laws and how the laws and enforcement practices impact Salvadoran families.  The two of us spent some quality time retooling the workshop to make it a little more interactive and appropriate for youth.  We added in photos and removed some of the detailed slides.  The biggest change was the introduction of written scenarios or character stories.  We planned for youth to read these as discussion-starters which we would then follow with the informational power point slides.

We started strong, singing Caminando en la luz de Dios (our Spanish version of We are Marching in the Light of God).  Everyone was clapping and the words are easy so the youth and the moms caught on quickly.  Then we shared the story of Jesus, Mary and Joseph migrating to Egypt because of threats against Jesus' life.  We don't really think much about Jesus migrating as a baby, and really, migrating from place to place his whole life.  Our next activity was designed to for all of us to learn more about the connections we share between the US and El Salvador.  We began in a big circle, and little by little people were invited to the center:  US citizens (my husband and I started as the example), anyone with a parent in the US, siblings, aunts or uncles, cousins, friends, Facebook friends...in the end there were a big majority in the middle and very few remaining in the outer circle.

In an interactive workshop about migration, it can be very tricky to create a comfortable space for people to ask questions or to share their stories.  More than once, I heard my husband say, "Don't worry, we are not La Migra (migration police).  We learned that in this group essentially no one had any accurate information about US laws.  The group also had very little understanding of concepts such as asylum or protected status.  We also learned that reading small scenarios is very helpful, and most of the readers tried to be pretty expressive with their situations.  Here is an example scenario:


Person with DACA:  I arrived with my parents in the United States in 2002 when I was very young.  I was only 3 years old when we crossed the border without documents.  I don't remember El Salvador.  We lived in Los Angeles where I attended school and now very soon I will complete high school.  My family always lived in fear because we don't have documents, but three years ago President Obama started a program called DACA.  Now I have protection and I can complete my dream of attending the University of California.  But I am still scared that the program will be ended or that my parents will be detained and deported to El Salvador.

It was pretty hard to read the faces of the group, but toward the end a couple of the adults asked questions about their family members who have been in the US for a long time.  One of the young people said she really enjoyed the workshop.  She said it was very dynamic and she liked my husband's professional expertise.  She is studying to be a lawyer.  We still were not too sure about the reactions of the other youth. 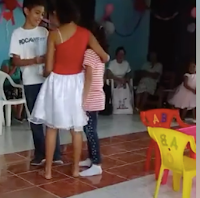 The next day, Sunday, we celebrated Mother's Day with our sister church.  (Mother's Day in El Salvador was Wednesday, May 10th.)  The pastor pointed out how beautiful it was that the US and El Salvador sister churches were celebrating mothers on the same day.  The church was decorated in pink, with balloons and streamers, hearts and flowers. After worship, the mothers were given the gift of a dramatic presentation by a group of children.  One of the youth who had been at the workshop the day before was the narrator.  This was the story, the narrator said, of a brave, single mother.  The little family - father, mother and child - were struggling financially.  One day the father had good work, and the family had food on the table.  Then he could not find work, and eventually the situation was desperate and he migrated north.  He stayed in the United States a long time, and sometimes he called home.  His little girl grew up and eventually she became a mother to her own little girl.  After many years, the father came home to his family.  It was a beautiful reunion, but he had passed so much time away, it was also very sad.

After the drama we shared cake, sandwiches and a Mickey Mouse piñata.  I congratulated the actors.  When I asked the future lawyer if she had anything to do with the project, she just smiled and looked at the narrator.  She smiled back.

The youth group meets again in 2 weeks.  They have already planned to continue talking about migration.  The main theme is:  migration to the US is not a solution.  The reality is:  migration within El Salvador is a prevalent, and if it is life or death, migration to another country truly might be the only solution.