Strategies for keeping the energy alive during a long protest march or during a series of social action events over a period of time is a challenge.  Environmental groups, human rights groups, and churches in El Salvador have been fighting for a law to protect El Salvador's water resources from the clutches of polluters and money grabbers for 12 long years.  There have been small victories along the way, but every time the political parties which favor the interests of wealth and business increase the number of seats they have in the legislature, new threats arise.  It is incredibly disheartening.

This is why it is critical for community organizers to invite, welcome, educate and encourage young leaders with new energy and new ideas into their social justice movements and organizations. 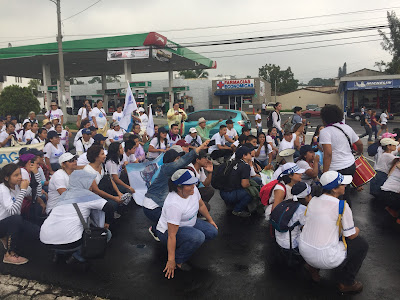 The student group from the UCA (University of Central America) numbered in the hundreds.  Somehow, our little team of middle-aged Lutherans ended up walking among them.  So, when it was time to crouch, we did our best.  We waited... waited... and RAN!  Well, actually, we slipped off to the side of the road to take some photos, because we realized this marching technique was effective in getting the attention of the press as well as making the march fun for the students.  Every so often, despite the pouring down rain, the drummers slowed their beat, the students and everyone with them crouched, and they waited while a big gap opened up in the line of thousands. Then they ran screaming about water until they caught up with the line. 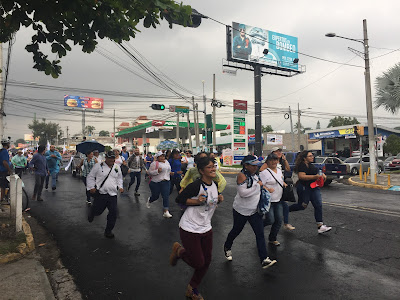 Did I mention drums?  Effective.  Batacuda rhythms draw attention, and make the march feel more like a dance.

For a while we walked behind a pick-up truck which held giant speakers and a young woman with a microphone.  She led the chants.  Chanting is also effective at drawing media attention and keeping the marchers focused.  If you have marched in the US and been a part of the back and forth of "Tell me what democracy looks like ... THIS is what democracy looks like" you know what I am talking about.  In the water march, chants of "Alerta! Alerta!" were followed by calls for protection of water from privatization.  El pueblo unido jamás será vencido.  The people united will never be defeated.


To see photos and videos of generations of citizens in El Salvador fighting for their rights to potable water, visit the El Salvador Water Forum Facebook Page (Foro del Agua is a consortium of groups including churches which is working together to protect and preserve El Salvador's water resources.)