July 14, 2018
Our sister church pastor from El Salvador is visiting us in the US.  As he describes it, we started with a group of five, and then it was a group of two, and in the end he is here on his own.  The visa game that the US Department of State plays with applicants for tourist visas (well, any visas) is not new.  The secret formula for success in securing visas for youth or adults, church leaders or lay-folk, is and has been frustratingly elusive.  Our friend and pastor has been in the position of being the lone representative for visits and celebrations in the United States numerous times.  He has a 10 year, multi-entry visa.  It is important to note that one of our invitees had a 10-year visa also, but only good for one entry so invalid for the most recent invitation. (Check that fine print on those 10-year visas!)

The motivation for this year's visit:  we are celebrating 20 years together as sister churches.  We are a triple team made up of a suburban and an urban church from the US and a Salvadoran church located outside of the capital city.  The celebration in the US has included 10 days of spending time with families and doing ministry as a team in the city and in the burbs.  The phrase we use all the time to describe ourselves is "Better Together."

We always try to find time in which we can hang out together in the community, soaking in some local culture and making space for meeting up with old friends and building new relationships.  This brings me to the focus of our story.  Meet Felipe.

The pastor and I walked up the steep hill, joining hundreds of neighbors for a free concert in one of our community parks.  We decided to walk among the crowd, winding our way along the switchback bike path up to the top of the hill, where local organizations had set up crafts for kids, food for sale and promotions for literacy.  "Is that a restroom?" the pastor asked, pointing to a building up ahead.  Yes, it was.  He just told me he didn't need a restroom, but...whatever.  He walked toward the building, making eye contact with a guy standing nearby.

We share some introductions and tell a little bit of our stories.  Felipe is from Mexico.  His sister is married to a Salvadoran.  He knows lots of people from El Salvador.  His boss recently returned to El Salvador and left Felipe in charge of keeping the gardens and lawn beautiful.  Felipe takes care of the park.  We had a good laugh over a story:  One time Felipe was driving a truck in Mexico and was stopped by some Salvadoran guys.  They asked him if he had any pisto.  In El Salvador, pisto means money - like a little bit of money in your pocket.  Felipe said he was so confused.  Of course he did not have pisto, he had told the guys, because in Mexico pisto means alcohol.  There is no way he would drink and drive a truck.

Felipe said it fascinates him to learn about the differences in language and in cultures.  Our conversation floated back and forth from Mexican Spanish, to Salvadoran Spanish, to English.  "It has been a pleasure - un placer - and a joy to get to know you," we said to one another.  I chatted with Felipe for a minute while the pastor continued on to the restroom.

As we walked toward the band stage, the pastor confessed he really did not need to use the restroom.  "I saw a man in the distance.  He looked small and dark like me.  I heard the sound of Spanish words in my ears, and I was drawn to it.  I was drawn to him.  I was curious."  As a frequent traveler, I can appreciate that feeling of being drawn to the sound of my mother tongue, of being curious about the stories of others who seem to share something in common with me.   When you are not traveling with friends, or have been prevented from traveling with friends, the need for a familiar connection might be a little stronger.

Sitting on the hill, enjoying the evening air, the sunset, and reggae music was relaxing and fun.  Friends found us - people we had met earlier in the week as well as people the pastor had met as church delegation members in El Salvador.   The ministry of hanging out, of showing up, of nice-to-meet-you reminds us that the world is big and small, and we really are better together. 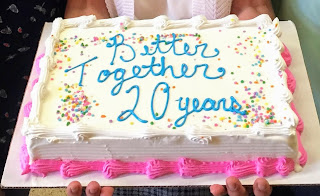