November 17, 2019
There is a cross in El Salvador which is called subversive.  It was seized by military forces who sought to kill the Lutheran Bishop.  Their plans failed and either in frustration or retaliation, they seized members of the church, visiting foreigners, and the cross as evidence of subversion.  This took place on November 16, 1989, the same day on which the Jesuit priests were killed at the UCA (University of Central America) in the early morning and by the same forces who sought to kill later in the day.


Today, November 17, 2019, the worship service at Resurrection Lutheran Cathedral in San Salvador remembered the journey and witness of the Subversive Cross. Pastor Brian shared his testimony in the form of a dramatization of when he, his companions in the church and the cross were seized.  As Pastor Brian knelt bound and blindfolded on the floor, the congregation was uneasy.  Some were remembering that day or their own similar experiences.  Most were imagining.


The accompaniment of the international Lutheran community provided rescue many times during the war.  As the dramatization concluded, Pastor Brian was released.  There were no closing words, no framing of the drama.  It just ended.  We started singing.  It was uneasy, unsettling, unfinished - to me, anyway.  Like all the unresolved war trauma that still sits in Salvadoran minds and spirits.  The singing filled the room with new energy.  It was a very familiar song, "Iglesia Peregrina" (Pilgrim Church):

The cross seized in the dramatization, like the Subversive Cross, was painted white and covered with black lettering - words written just this morning during an act of confession.  Like 30 years ago when the people of faith gathered to confess the sins of their time by writing them on a plain, white cross, today's congregation inscribed words of confession on a plain, white cross.  "You can see," noted the Bishop after the words had been written, "that the some of the sins of the past continue to be sins of the present."


The Subversive Cross stands as a living reminder of the martyrs who gave their lives advocating for justice and defending the rights of oppressed Salvadoran people.  Today we particularly remembered those who were killed in November:  Father Ernesto Barrera Motto (11-28-1978); Jesuit Fathers Ignacio Ellacuría, Ignacio Martín Baró, Segundo Montes, Armando López, Juan Ramón Moreno, and Juaquín López and Elba Ramos with her daughter Celina (11-16-1989); Lutheran Pastor David Ernesto Fernández (11-21-1984); Lutheran Pastors Francisco and Jesus Carrillo (11-4-2006).  We pray that the legacy of their faith and work encourage us as advocates for justice and builders of peace.  We pray that God accept the confessions of sins as written on these 2 crosses.  We pray that God heal traumas, give energy, and inspire creativity in the generations who wrote then and who wrote on this day.  May we claim our identity as subversives, working against all that tears people down and tears people apart, and working for that which builds up and builds unity. 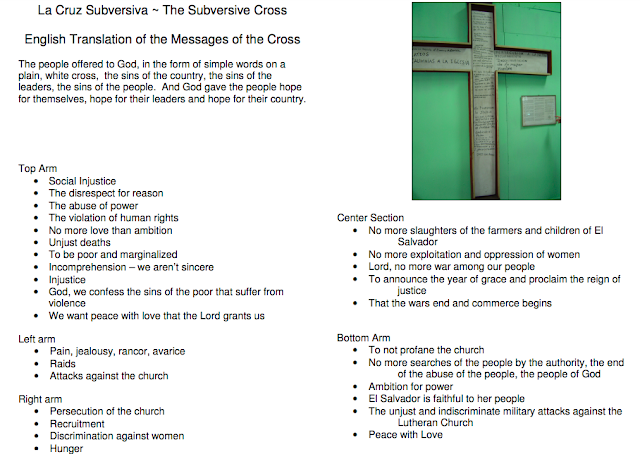