January 31, 2021
Staying safely at home is what most of us are doing right now.

If you have an outdoor space, if you have a yard, if you live near a park, if you can walk on a sidewalk, you know how lucky you are to have the ability to get outside during this pandemic.

San Salvador is a very crowded city.  Social distancing might seem like a good safety measure to observe, but in tiny spaces and on narrow, ramshackle sidewalks, it simply is not practical.  The proper use of masks is impressive, but there are just a lot of people.

So, we asked ourselves, what can we safely do outside of our home?  One idea:  A walk in Bicentennial Park.

Saturday morning was cool and sunny.  Well, at this time of year, every morning is cool and sunny in San Salvador.  We masked up, put on our sunglasses and hiking boots, and took the short drive over to the park.

Parque Bicentenario is a 225 acre reserve located on the border between San Salvador and Antiguo Cuscatlán, along Avenida Jerusalén, south of the San Salvador volcano. 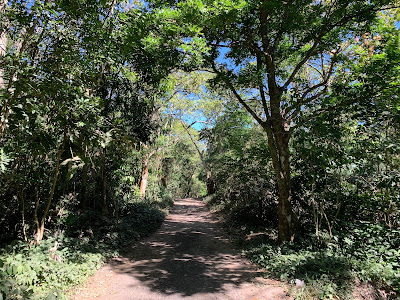 The park is not fancy.  Perhaps it would not be highly interesting to tourists or a group of youth, but it is an excellent place to exercise by walking, biking or taking advantage of some of the equipment along the paved perimeter path.  As a safety measure during the pandemic, the picnic areas and playground equipment are closed. 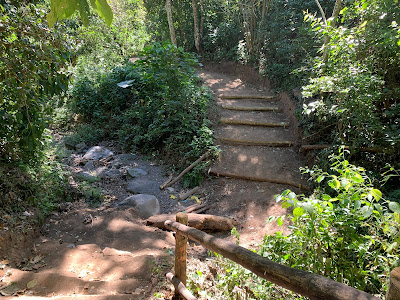 The pathways have varying degrees of difficulty.  During the rainy season, the gullies are surely filled with water, but it looks like strategically placed bamboo and rocks provide ways to navigate through the water. 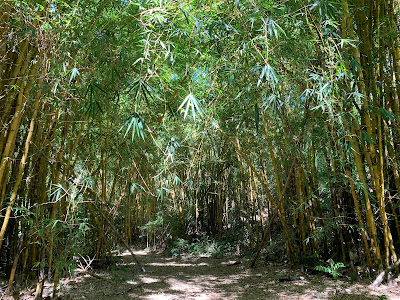 In the center of the park, the sound of bamboo stalks clicking in the breeze and the songs of 118 different identified bird species drown out any sounds of the nearby highways.  One of the historic names for this area is Bosque los Pericos (Forest of the Parakeets - yes, the famous green ones).  The current name for the park honors the date on which the park opened to the public: November 5, 2011 - the 200th anniversary of the first cries for freedom in Central America.

Traveling back in time, this land was a subtropical forest, before becoming the property of General Gerardo Barrios (1813-1859) and after his death became the property of the Dueños family.  The land, Finca El Espino, was used for growing shade coffee and ownership stayed with the Dueños until 1980 when President Duarte seized it as part of a plan for agrarian reform. 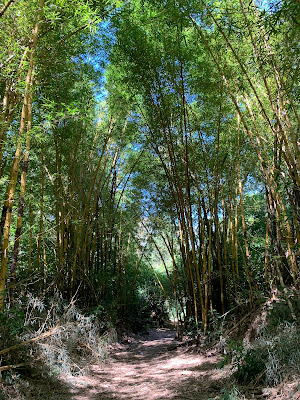 In 1993 (one year after the Peace Accords were signed following the Civil War), the legislature declared the area a protected forest, and in 2009 the park was declared protected as an ecological reserve. Throughout the park, evidence of restoration of the soil, native trees, and native flowers is evident.  Young coffee trees have been planted in the shade of the taller trees.

The park is an ecological treasure and is referred to as a lung for the city of San Salvador.  Green spaces such as this capture tons of carbon dioxide gas and store it in the earth, release fresh oxygen into the air, and help to replenish the aquifer which provides potable water for the city. 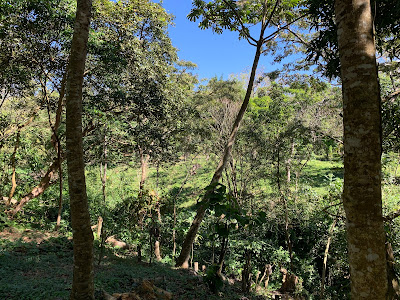 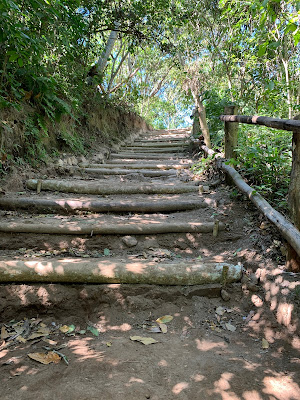 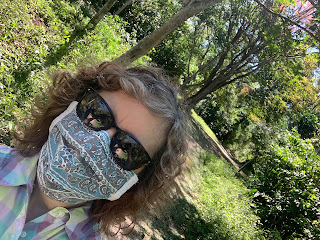 We hiked for a little more than 2 hours and encountered a few mountain bikers, a few people walking with their dogs and a few people hiking like us.  There are trails for pedestrians and for mountain bikes, which can be rented at the park.  It is free to enter, but parking will cost $2 for a car on weekends.
When city governments, the national government, scientists and advocates for safe, recreation spaces can work together to create sustainable green spaces for our cities, the health benefits for the citizens, visitors and the planet are well worth the investment.