An early morning on the beach means being welcomed to the new day by the sound of rolling waves, the flutter and call of sea birds, the scent of fish, the chill of the damp morning air, and the friendly greetings of wandering dogs. 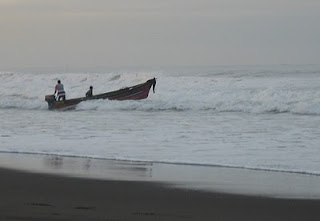 As soon as the approaching sun sends out enough light, the fishermen pull their boats to the edge of the water, load up their gear, and head out toward the breakers. The boats need to get up enough speed to blast themselves up and over the crashing waves so that they can get out to deeper water. The small motors are really put to the test, and the pilots make many failed attempts before finally breaking free.

We asked our friend if he had ever gone fishing out in a boat like the ones we were watching. He said that he had gone out one time, riding in the bow of the boat while the fisherman was driving. Getting through the breakers was very scary and he said he almost flew into the water. That was the first and last time that he went fishing out in a boat!

As the sun crept up over the horizon, the air warmed up enough and we headed into the water for a quick swim. Apparently we two gringas have acclimated ourselves to the Salvadoran climate, because, despite swimming many times in lakes up north with much colder air temperatures, we quickly wimped out on the ocean swim. Instead, we sat drying in the sand, enjoying the morning conversation, and giving out little "holas" to the dogs.

The sun was up and it was time to go. We stuck our damp, sandy selves into our clothes (once more affirming our identities as Greasy and Grubby) and walked to the road to seek out transportation. We flagged down a truck (built to carry people and stuff in back) . . . and climbed aboard. And, what would you expect folks to be carrying out to the main road from the beach? Fish! Big plastic and aluminum buckets of fish. We headed back up the dirt road to the highway. Along the way, our friend pointed out the ruins of a couple of abandoned places which had been damaged during the war - remnants of a sad time which created a 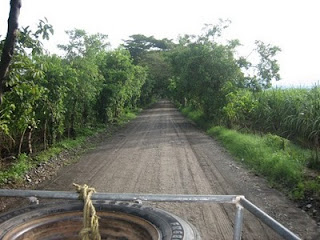 pensive look in the face of a young man who was born as the Peace Accords were being finalized.

We arrived safely back at our friend's home, with wind-blown hair, sand in our pants, and the vague scent of fish wafting around us. We shared a quick breakfast of cornflakes and milk, gave and received lots of hugs, and said our good-byes.

As we rode back to the city, we were feeling really proud of our young friend. He had spent time living in our homes as part of a Lutheran Church youth program, and had graciously invited us to stay with his family as an act of friendship, hospitality and gratitude. He took us around to see the sights, taught us about his life at home, and took good care of us even when the situation was a little out of his control. We continue to see our friend from time to time, and continue to admire his gentle manner, his leadership and service to others.

(Note: You have probably noticed that in my blog posts I do not use people's names much, nor do I post photos of them. I have adopted this practice in order to respect my friends' privacy, but also to keep them safe. Some of my friends live and work in situations which are difficult. This is a reality of life in some parts of El Salvador.)
Culture Off the Beaten Path Tales of Greasy and Grubby