December 22, 2010
The girls arrive with their hair in sweet-smelling curls and a little make-up on their lips and cheeks. Their moms are also lovely, with a little bit of anxiousness in their eyes and nervousness in their movements. The space is decorated with balloons and streamers and proud families take their seats in borrowed folding metal chairs. The ceremony begins with the national anthem, blaring out from enormous speakers.

The pastor gives a prayer and the master of ceremonies introduces various dignitaries...a local mayor, pastors, the sewing school teachers, and sometimes, guests from the United States. 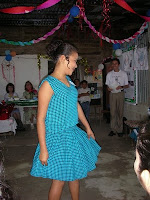 udes a highlight - celebrating graduation day at the sewing school.

The idea of a sewing school and cooperative was one that was birthed early on in our relationship. Over the years we have hauled and shipped machines, equipment, and fabric. We have supported the students with prayer and gifts of graph paper, pencils, tissue and scissors. We have been impressed with the students' design abilities and skill. We have been disappointed when the cooperative aspect of the venture struggled, but have faithfully supported the few or many students who earn official diplomas based on their number of years in the program. We have been measured for clothing, and given the gift of hand-made clothes. And a couple of times, we have shared in the joy of graduation day.

After the anthem has been sung and the guests have been introduced, the fashion

show begins. We will all remember that first graduation, as the students modeled their burgundy evening dresses to the blaring strains of Material Girl. Replayed several times, that was the theme song for the year and we just could not help laughing and wondering if the Salvadorans understood the humor in their song selection. That first celebration ended with Greasy's and Grubby's husbands dancing on stage with the models to a few tunes, including Material Girl.

A few years later, Greasy and Grubby were selected to judge the fashion show. There were categories of children's wear, folk dance costumes, casual clothes, women's suits. Grubby had dutifully worn her baby blue polyester skirt, which had been made for her a few years back, and neither felt qualified enough to be the judges. We two decided just to agree with the teachers' choices.

After the show there wa 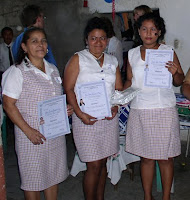 s a raffle. The prize was a big plastic bucket filled with all kinds of useful things for the kitchen. Grubby's husband, who was also appropriately attired in a pair of khaki pants which had been designed and made for him by the students a while back, was the winner! He had fun giving his gifts away to some of the women later in the day.

The graduates receive their diplomas, each one crossing the floor with Pomp and Circumstance and each escorted by a white-shirted husband, boyfriend or brother. Some of the graduates continue in the program for another year or two, moving from patterning and hand-sewing to machine sewing, or from women's clothing to men's pants or knitwear with the serger. Most of the graduates sew clothes at home for their families, some will make things to sell. Some students get jobs in maquilas (factories or sweat shops). The cooperative aspect of the school has struggled to be successful as its own business.

Men's pants are the specialty of the lead teacher and some of the students, and Grubby's husband, who wears his pants all the time in El Salvador and in the US, will testify to their good quality and fine design. In the past year, this specialty has served the school well, as it was awarded a government contract to make uniforms for the local school children. This has been a wonderful achievement and source of income for the students and the sewing school.

We will continue to support the school with suitcases full of donated fabric, with envelopes of donated needles, with prayers for a productive and successful new year, and with a hearty "Congratulations and Merry Christmas!" to the Material Girls and Guys in the sewing school!