December 16, 2010
We arrived with our families on Christmas Day. We gathered inside the little church, and it was already getting dark. The benches were set up around the perimeter of the walls so that all could see the children who were gathered in the center. Pastor Santiago took on the role of director, gently placing his hands onto kids' shoulders and guiding them into place. Then he bent over, face to faces, so he could give the children some final instructions before the pageant began.

The girls were dresse 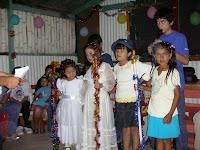 d in their best white dresses, which first appeared at their baptisms or first communions. They carried shepherd staffs, which glittered with Christmas garland. They sang a few songs, and then invited one of our kids, a drummer, to join them for a special song. They handed him some sticks and a little home-made drum and invited him to sit with the others and give the beat.

t was adorable to me, as the mother of the drummer.

This little memory really sticks with me because it was just so very thoughtful - to remember that one of the guests has a talent and to invite that guest to be a part of the pageant, the team, the group, the family.