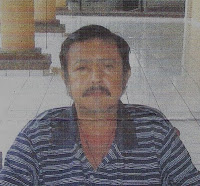 There are some stories which are meant to be told. Told not often, not casually, but told when the time is right.

The time seems right to tell this story. This is the story of Antonio.

Antonio was brought to us by his family. He arrived in a wheelchair, bandages around one ankle and foot, an IV-port still in his arm, evidence to support the family's concern that he left the hospital without permission.

The Mission of Healing team was set up that year in the Salvadoran Lutheran Church clinic - a very basic operation in a large, war-worn building. Bus-loads of patients were brought in from outlying communities to pass through our system of holistic care. Antonio had heard about the mission from Lutheran neighbors in El Paisnal, and he had faith that we could do something for him which the hospital doctors could not.

The triage nurses took Antonio's vitals and history. He worked in construction and was a strong man. He had been on a job and injured his foot. He was in his fifties. He suffered from diabetes. The pharmacy never had any insulin. His foot injury became infected. The doctors said they had to cut it off. He refused. He could not work to support his family without a foot. Could we help?

One of the nurses lovingly began to unwrap Antonio's foot. The smell of rotting flesh seeped into the air. "Breathe through your mouth, not your nose," she thought to herself, as she fought against the urge to gag. As the foot was revealed, the gangrene exposed, the nurse gently called over to our nurse practitioner "la Doctora." La Doctora studied Antonio's foot, explaining the gravity of the infection to Antonio and his family, and quietly sent someone to go and get a pastor.

The nurse gently cleaned the wound, explaining to Antonio's wife that she could cleanse the foot with boiled water and should change the dressing to keep it as clean as possible. She bundled up a bag of clean dressings, offering the best she could for a hopeless situation.

Pastor Santiago had been working in the spiritual healing center up on the second floor. He came downstairs to triage and was shocked to see his old friend Antonio, seated in a wheel chair, in danger of losing not only his foot, but his life. "Would you like to go to the spiritual center to pray?" the pastor asked.

"Yes," said Antonio. Antonio was wheeled over to the bottom of the stairs. Four men grasped the four corners of his chair and carefully lifted Antonio up to the second floor so he could be taken to the healing cross for a time of prayer. On the first floor there was a moment of recognition that the Gospel was coming to life before our eyes.

Then some people came, bringing to him a paralyzed man, carried by four of them. And when they could not bring him to Jesus because of the crowd, they removed the roof above him; and after having dug through it, they let down the mat on which the paralytic lay. When Jesus saw their faith, he said to the paralytic, "Son, your sins are forgiven." Mark 2
The cross of healing was a plain wooden cross, painted white. People were invited to write on the cross, to place their burdens, their sins, their pains, their needs for healing in body, mind, spirit and relationships into God's hands through the cross of Jesus. Antonio and Pastor Santiago prayed, and at some moment, Antonio placed his life into God's hands, "I am ready to be in your kingdom, where my body will be whole," he said.  He placed his words, his burden, his body onto the cross. Then he went home with his family.

It was late morning when Antonio came to us. In a strange juxtaposition of experiences the healing team found itself eating lunch at a nearby Pizza Hut. We sat there, looking at pizza, numb. We should pray for Antonio. What should we pray for Antonio? Healing? Amputation? A quick and peaceful death? Antonio had turned his life over to God. We had to do that too. Our prayers for Antonio were simple and constant. At Pizza Hut, throughout the afternoon and the final days of the mission, on the plane and back in our homes, "Antonio." We just prayed "Antonio," lifting his name up into the air for God to catch and to do whatever it is God would do.

A few weeks after our return home, an email arrived. I called my friend* - or she called me - but as soon as the email hit the Inbox we were on the phone with each other, crying, laughing, celebrating...

The email was from Pastor Santiago, who had received word from the Lutheran pastor in El Paisnal, that on the previous Sunday Antonio had walked to church and walked into church proclaiming that God had made a miracle! He was healed! He had placed his life into God's hands and he was healed!

This was a story which had to be told. We had invited the Sunday School children in our church to pray for Antonio from the time we had returned home.  Children made bracelets with beads on them - one prayer bead for each special person in their lives and one prayer bead for Antonio.  We acted out the story of Jesus healing the paralyzed man and shared the story of Antonio, hoping to grow in the children the strong belief that in God all things are possible and miracles really happen.

A few months later, I was invited to El Paisnal to visit with Antonio. He had heard about the children in our Sunday School who were praying for him, and he wanted me to make a video testimony for them so that they could see with their own eyes that God really does make miracles happen. By this time, the diabetes was impacting Antonio's eyesight, but that did not diminish his spirit for the work that God had given him - to testify to the healing power of God who is the Great Physician. You can watch the video online.

For my friend and I, the experience of Antonio's miracle brought back memories of another Antonio. These two men named Antonio have made their marks on our lives, serving for us and for all who will listen, as living testimonies to the healing power of God and the ways in which God works to bring us together to work, love, pray and witness.


*In many of my blog stories, my friend and I are referred to as Greasy and Grubby.

Delegations God at Work Tales of Greasy and Grubby