Jammin' to the same Tunes 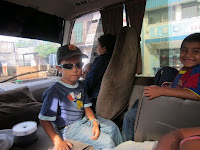 One by one, the moms, young adults and a couple of little ones climbed into the bus. It was 7:30 am and we were heading out from our sister church community to tour Tazumal and Santa Ana. Delegations often do a day or two of "tourist" activities during a sister church visit, but this delegation was different - it was all about doing things together. So, on this day, the "tourists" were mostly Salvadoran. Out of the 24 people from our sister church community on that bus, only 2 of the young people had been to Tazumal on school field trips, and only one had seen the cathedral in Santa Ana.

We headed for the highway, and not too far down the road one of the young ladies popped up front to chat with the driver. (First of all, it was extremely funny that she knew the driver - in El Salvador I think there are only 2 degrees of separation between people.) She flipped down the DVD player and put in a music DVD. (It was also funny that we have ridden in this coaster many times and did not even know there was a DVD player.)

The first DVD featured a female singer, and the young ladies in the bus all crooned along with her. Then came the música romántica and my friend Julia belted out the lyrics in that deep off-key voice that is so recognizably and beautifully hers. The women teased Julia about her husband and their dating days more than 30 years ago. There was so much singing, and so much laughing -- just what you might expect from a bus full of excited kids on a field trip.

Seriously, I do love ABBA. ABBA Gold is my "go-to" CD when I am scrubbing and dusting and doing laundry and need to get it done fast.

In between songs, Julia leans over and says, "I turn up the volume and listen to ABBA when I am doing the laundry and cleaning my house."

And so there were were, on a bus to Santa Ana. 24 Salvadorans and 3 North Americans, laughing and teasing and singing along with ABBA.

More about Tazumal and our other excursions in my next story.