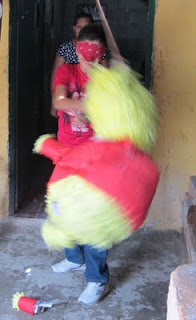 From the top of the hill we could see yellow and pink and blue balloons, strung in an archway along the side of the path. This was our first sign that the afternoon would be special.

We walked carefully down the steep slope, down the crumbling stairs, across the little ditch, pausing at the ballooned gateway for a "pase, pase", and we entered the front yard of the party house. White plastic chairs, borrowed from the church, were lined up beneath the metal porch roof. We were invited to sit down, which we did for a moment here and a moment there in between standing up to greet each new arrival.

As we were served chilled cola in styrofoam cups, a big box from Mister Pan was carried inside. Soon, china plates with gigantic pieces of cake were handed to each of us. On top of the orange drink, the fruit salad with honey, and the blue frozen treat with gummy worms inside which we had received at our three previous home visits of the day, the cake was the perfect dessert.

We had fun chatting with the kids and parents. It was especially meaningful to two members of our group who sponsor one of the kids from our host family in the church's scholarship program. Before we knew it, a piñata which looked like a cross between a Pooh bear and a Pokemon character was hanging from the bamboo rafters. How fun! A piñata for the kids...or so we thought.

Shouts of "madrina! madrina!" came from the moms who were present.

"¿Todos somos niñas y niños, verdad? We are all children, right?" one of the moms said, and so the scholarship "godmother" reluctantly took the stick in her hands.


With sugar coursing through her veins and the heat of the day giving her face a lovely glow, the madrina took her swings.

Shouts of higher! higher! lower! lower! filled the front porch as one of us padrinos had a turn to swing the big stick at the elusive piñata. One by one we were called up, blindfolded, spun around five times, and given the stick. One of the moms pulled on the string and the piñata rose up and down, occasionally suffering a big whack and losing first one foot and then another. The head separated from the body, but still it danced through the air. Some kids joined in the fun, and the moms did too. Eventually candy was spilled and tossed into the air, and we all ended up with pockets full of treats.

"I have not laughed so hard in a long time," said the madrina who had taken the first reluctant swings.

Piñatas are for everyone, because we are all children...right!