The Cathedral Loses More than a Facade

December 31, 2011
Today I learned that the facade of the Metropolitan Cathedral in San Salvador has been destroyed, not by an earthquake or the winds of a hurricane, but by the hands of workers at the direction of church leaders.  The images of the colorful tiles crashing to the pavement, the chiseled shards being gathered into white buckets and irreverently being tossed into a dumpster are painful to see. 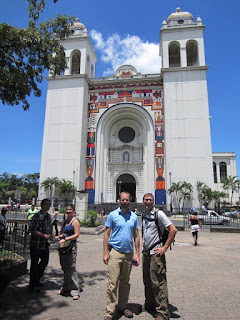 I don't want to question the right of the Catholic Church to pull down something old to make way for something new - new wineskins for new wine are sometimes needed.  As a non-Salvadoran, I don't want to impose my outsider opinion on a Salvadoran decision.   But in my heart I do question the wisdom in carrying out such a violent act on a mural depicting peaceful images of the Salvadoran people, and I do wonder what the motivation was for such a decision.

Like any artist, Fernando Llort, the creator of the facade, has his fans and his critics.  I am personally a fan.  He and his family have been very gracious during our visits to their workshops, taking the time to work with Salvadoran friends and artisans who wished to learn more about Llort's artistic style and technique.  His web site has a lovely story which describes the impact of his experience in creating the work of art which framed the entrance to the Cathedral.  I can't imagine how sad and confused and offended Mr. Llort must feel as he witnesses the great disrespect which has been shown to one of his life works.

The most recent photo I have of the Cathedral was taken in September 2011.  I was there with a Salvadoran friend who had not yet seen the completed facade.  His last visit had been during the time when the facade was still covered with scaffolding, and the artisans were putting the tiles into place.  He was so thrilled to see the completed images, colorful and peaceful, surrounding the statue of Jesus.  The plaza in which we stood held for our friend past experiences of fear and violence and death.  On that recent September day, with the sun shining in the bright blue sky, with the green trees shifting slightly in the breeze, with the older men relaxing on park benches and women selling aromatic fried foods and fruit, the mirrored images of colorful Salvadoran life stood as a backdrop to peaceful moments.  It was a profound experience for my friend, and one that Salvadorans and visitors to El Salvador will miss.

My friend Tim has also written about the destruction of the cathedral's facade on his Blog.
art Culture Current Events