May 27, 2012
We exited the plane and entered the jetway.  It was like walking into an oven. The airport was not much better.  We followed our leaders like ducklings waddling behind their parents.  By the time we exited, slumping under the weight of our backpacks and dragging our suitcases behind us, our moist hair was sticking to our heads and our clothes stuck to our skin like damp rags.

We were greeted warmly by strangers who would become friends, we all piled into an old school bus and a couple of pick-ups, and we began our adventure.  We didn't get too far.  A vehicle with lights flashing and full of police with large semi-automatics stopped one of our trucks.  One of our delegation members had not signed his passport, and having been flagged by security, he was targeted for an inquiry.  It took a little time to get this straightened out, perhaps because with his native North American features this guy "looks" Salvadoran.  Everyone in the bus surreptitiously pulled out their passports to check for signatures, and a few pens were pulled out too.

Fruit stands rimmed the edges of the small 2-lane highway.  Our sweaty faces gathered a thin layer of grime as we peered out the open windows at the green hillsides, mountains and volcanoes.  The road carried us right into the heart of San Salvador, where small cars jostled for imaginary lane positions with fabulously painted Bluebird buses that belched out clouds of diesel exhaust.  Gridlock prevailed. This allowed us to gaze with appreciation at the beautiful hundred-year-old wooden buildings, to smile at the women and children who walked along the sidewalks, to observe the habit of Salvadorans at that time of tossing their trash out of the bus windows and into the streets.  Litter was everywhere.

Some first impressions, the sights, the smells, the feelings are so strong that it seems that they could not have been experienced a dozen years ago.  Curious as to the accuracy of my memories, I dug out some loose pages of note paper from an old folder...

We took a walk around the neighborhood near the guest house.  It did not feel too different from home.  The sounds of early morning are very different from home.  Doves, roosters, lots of dogs barking and maybe fighting over food or territory, and lots and lots of unusual bird calls.  This is a very loud city - from the TV at midnight to the car backfiring, to the buses gathering at the intersection... 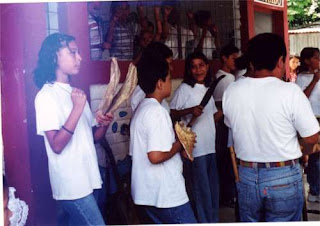 Our first visit was to the community of Los Olivos.  It was a long bus ride through streets polluted with noise and trash and smog.  After we stopped for gas, we got into a tangle of traffic which culminated in Laura quickly pulling her elbow and head further inside and gasping, "That...was...one...close...bus!"  The drive into the community, which although in the city feels like a world away, was lined with small houses and champas (maybe shacks is the best word) and stands of thick vegetation.  The road was just wide enough for the bus.  It was a rutty rocky mess.  We walked up to thte school, where the children were giving a concert of local folk music.  The instruments are so cool!  Seed pod shaers, a drum, marimba, guitars, wooden flutes, sea shells and turtle shells.  The community's sister church from Munich then shared its music - a brass um-pah band, featuring classical tunes and a bit of jazz...Backing down the road was scary.  Admiring the abuela jamming to the German tunes was a lesson in enjoying life.


We stopped next at the clinic and offices of the Lutheran Church.  We took turns sending emails home to let everyone know we had arrived safely.  This is in a very depressed part of the city.  Pastor Santiago told us that it is filled with drugs and bad examples for children.  A small group of kids "adopted" us for a couple of hours.  Katerin and Karla were very adorable.  They were so free and friendly, and I wonder what they do when they don't have the kind of attention they had today.  We visited the Youth Room which held a giant paper shofar which will be used in the August 6th parade.  Pastor Santiago was so proud of the kids' work.


I wonder what first impressions will stick with the families from our church who will soon travel to El Salvador for the first time.  I wonder what words their journals or scraps of note paper will hold.