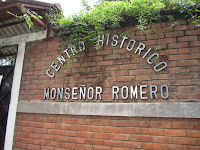 The Monseñor Romero Historical Center at the Divina Providencia hospital is not exactly off the beaten path.  Most pilgrims to El Salvador find themselves visiting the hospital chapel and humble home of Monseñor Oscar Romero, whether guided there by their delegation leaders or by their own desire for inspiration. 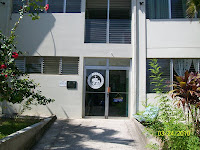 La Divina Providencia is first and foremost a hospital.  It was founded by Sister Luz Isabel Cuevas who sought to shelter cancer patients who had no place to stay other than the streets as they needed to remain close to the hospital where they received treatments.  Eventually land was donated by "divine providence" and the residential cancer hospital was constructed.  Monseñor Romero chose to live among the sisters and minister to the patients during his time as Archbishop.  The hospital's mission is to provide palliative care with attention to pain management and emotional and spiritual guidance for patients who nearing the end of life on earth.  It is possible to make arrangements to visit the hospital and to volunteer there. 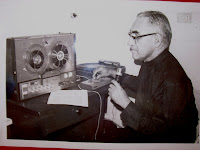 Before traveling to El Salvador, I encourage delegation members to spend some time learning about the life and witness of Monseñor Oscar Romero.  We have used the films Romero with Raul Julia, and more recently Monseñor:  The Last Journey of Oscar Romero to help travelers to prepare for their experiences in El Salvador.  Few of us have personal experience with the kind of oppression and violence which occurred during the time surrounding the civil war in El Salvador, and without some forethought and preparation, it is difficult for our children, youth and adults to be confronted by the horrific stories and images which are preserved in museums and sacred places in El Salvador.  The Monseñor Romero Historic Center contains artifacts and photos which depict his humble life and his violent death.

Over the years we have been guided through Romero's home and the chapel by a series of Carmelite Sisters, each with her own style.  In the early years, the sisters shared stories of how they and others in their community had hidden artifacts and photos during the war, protecting them from seizure or destruction.  As the movement calling for the beatification and canonization of Monseñor Romero as a saint gained publicity and global support, the sisters began to share miracle stories including answers to their own prayers and stories about the lack of decay of Romero's heart or body. 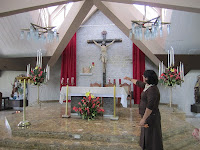 Last summer, our sister guide began our tour by walking with us to the hospital chapel where Romero was killed.  She described the events of Romero's final day, emphasizing his dedication to his flock, the poor, the suffering and his willingness to serve in the manner of Jesus by laying down his life for his sheep.  She invited us to step up to the altar and to think about the ways in which we are dedicating our own lives in service to Jesus.  Then she told us to place our hands on the altar, to close our eyes, and to make a promise to the Lord that we would take the transformational experience of Monseñor Romero's life to heart and somehow dedicate our lives to service in new or stronger ways.  After some quiet moments in the chapel, we walked down the hill to Romero's small house where we carried on a long conversation. 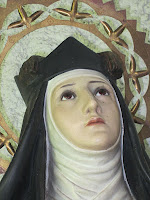 This experience really stuck with us.  As Lutheran Christians we have always visited the chapel, prayed in the chapel and even attended mass in the chapel in faith and with great respect.  Yet to be invited to step to the altar to place our hands onto the altar was profoundly welcoming and personal.  On that particular day, we were accompanied by three mothers from our sister church.  Thse young women live an hour away from La Divina Providencia, yet they had never been there.  We placed our hands on the altar together.  What each one of us promised is a mystery; that we did it together is a blessing. 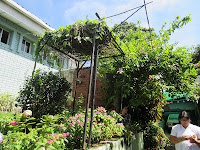 The last time we visited the historic center at La Divina Providencia we were greeted by whom I thought was a new sister guide.  (I later realized she was the same guide from the summer.)  She did not seem very welcoming, and when she learned that we had watched the Romero film prior to our visit, she went on a little rant about how North Americans don't really learn the facts and should read books (she had a laundry list of good ones).  She said, "North Americans come here as tourists but they don't really want to stop and experience and take the time to learn things."  The delegation members were taken aback for a moment by "the little sister with big attitude," but they stuck with her and said, "that's why we're here...tell us the real story." The group asked lots of questions.  As the conversation grew, so did the smiles from our guide.  Perhaps she had sized up the group and knew that they could be challenged.  Somehow we ended up talking about our favorite pupusas, and I mentioned queso con loroco.  Sister showed us the loroco vines which grew on a trellis in Romero's garden, hopping up there to pick a few pods so that folks from the group could smell and taste.  At the end of our trip as the delegation members shared memorable moments and people, the "little sister with big attitude" was fondly remembered. 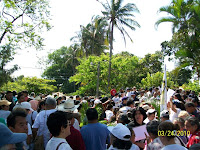 Each year on March 24th, the anniversary of Monseñor Romero's assassination, pilgrims gather in the park-like area and small street outside of the Divina Providencia.  The small chapel is filled to overflowing with bishops and campesinos, Salvadorans and Europeans, North Americans and Central Americans.  After mass the throng marches through the streets of San Salvador on a pilgrimage to the cathedral, not an easy thing to do after getting up at 3:30 am to shoot off fireworks and drink chuco...but that is another story.


Delegations God at Work History Off the Beaten Path