Off the Beaten Path: A Day at Lake Coatepeque

August 13, 2012
It was a long drive from the city out to the lake.  We crammed ourselves into a bus and an SUV. According to the advice of the group, we left San Salvador at 6:30 am.  Our first stop was a gas station where more than a few grabbed an early morning coffee and everyone used the bathroom.  Considering the women vastly outnumbered the men, the ladies decided to take over the men's room too.  It's hard to describe how funny this was - the teenage girls needed a lot of convincing that this would be OK. When a gentleman showed up he chuckled at the situation and graciously waited in line for his turn after the ladies finished up.   We were soon on our way and arrived at the ruins of San Andres too early to enter.  No problem! We decided to go to the lake first and the ruins later in the day.

Our next stop (after the gate at San Andres) was at the grocery store in El Congo where a very practical team of  women picked up the fixings for a picnic lunch of ham sandwiches and orange drink.  We took the tree-lined highway to the lake, driving down into the ancient caldera and the lake shore.  The public park we had hoped to access was closed, so we paid a fee to enter a private beach adjacent to the public area.  Hopefully the government will keep its promise to reopen the park so that the public can continue to enjoy this Salvadoran natural treasure.

We gathered on the boat dock for a time of devotion.  It was a pastor's dream...a fisherwoman standing in a rowboat near the shore, casting her nets and pulling in the fish.  We read from the Gospel: Jesus calling his disciples to come, to follow him, to fish for people.  Pastor Santiago asked the Where is our lake?  Where do our little fishies swim?”

“Who are the little fishies who need to be caught?  What are their names?”  It took a moment, then someone said, “Vanessa.”  Someone else said, “Karla.”

“What is the net that we will use to catch these girls?”  Pastor Santiago continued. 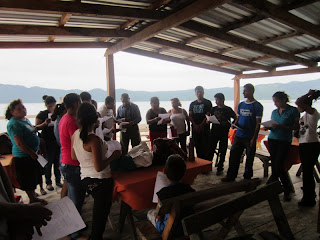 “Yes, good example,” said Pastor Santiago.  The conversation continued, identifying other fish and other possibilities for nets.  Pastor Santiago said several times that each one of us has a job from God:  fish for people.  It was practical.  It was real.  Fishing for people is not meant to be a metaphor.  Jesus wants us to go out there and really care for the lost ones and to take practical actions which change lives.  We concluded our worship time by singing the "Lakeshore" song.

Next, it was time to go swimming.  The majority of the group of about 40 people from the community had never been swimming before.  A few had bathing suits.  Some swam in their clothes.  A few were too afraid to try so enjoyed sitting in the cool grass and watching the kids splashing in the shallows.  The water was cool and wonderfully clean!  It was a lot of fun for so many who never had a chance to swim before!  We brought a blow-up raft which provided lots of fun.  Next time we will bring extra swim suits.

At lunch time the grocery team gathered to make sandwiches:  white bread, ham, cheese, lettuce, tomato and salad dressing.  Each sandwich was carefully wrapped in a napkin, and when it was time for lunch each person received two.  There were special ones without the fresh veggies for those with sensitive northern tummies.  The sandwiches were delicious.

After lunch a young man said he would give us a boat ride for $1 per person.  A few teenage girls were eager and with encouragement, some of the mothers and younger kids decided to give it a try.  Luckily I had a $20, and I slipped it to the boat driver so that all 22 who wanted to go could climb on board.  "Linda, you have to come too," they said.  The driver handed me a life jacket.  I passed it on to one of the moms who didn't have one.  Pastor Santiago handed his off to a teen boy so that everyone but the two of us had jackets.  "No worries," I said when a couple of moms looked at us with concern, "Pastor Santiago and I know how to swim." 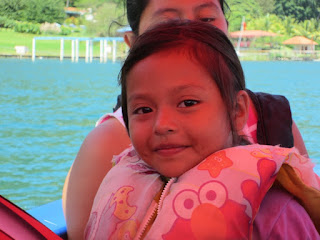 A couple of the women looked a little worried.  "Are you OK?" I asked.  "I'm nervous," one whispered.  "Me too," said Julia, "I've never been in a boat before."  As it turns out, no one had been in a boat before.  I thought about how at home the landscape is generously dotted with lakes left behind by long ago glaciers.  It's hard to find a person, city or countryside, who has not seen a lake, played by the lake shore, ridden in a boat, or gone swimming.  Sometimes we just take things for granted.

We clipped through the water at a pretty slow pace, but fast enough to enjoy the occasional bump and splash of waves and to feel the wind whipping through our hair.  Half-way out the driver accidentally killed the motor.  The ladies panicked a little, worried we would not make it back to shore.  Soon we were on our way, and we made it back just fine. 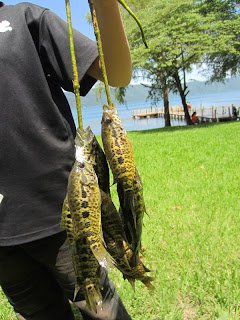 A few families bought fish from the local fishers.  We gathered up our clothes and our towels and our fish and loaded up for our trip back up the interior wall of the caldera.  It was fun to see the lake again from above.  We waved good-bye to the water and continued on with our adventure for the day.   It was a good day, a day to remember with a message to remember. 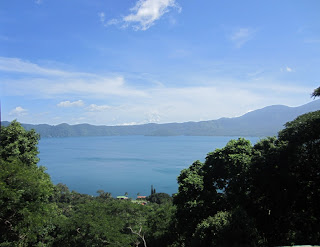