August 31, 2012
In the early days, the secret goal of any delegation member was to be assigned to Sandra's house.  Even before the days of cinder block and tile floor when the roof leaked and a riverlet channel ran across the width of the dirt floor, Sandra's house provided a much appreciated level of comfort.

Some people are just naturally neat and tidy.  Some people have a knack for creating a cheerful and welcoming space with very basic things.  Some people can turn ordinary ingredients into a gourmet dinner.  Sandra has these gifts by nature, but she has also developed these gifts in order to preserve the precarious life of her son.  Born with a serious heart condition, Sandra's son was not given good expectations for a long or active live.  He is now in high school and has aspirations of becoming a doctor.

So, as Sandra swept debris from her yard to keep the cockroaches and mice away, as Sandra carefully washed her vegetables and dishes in water which she chlorinated, and as Sandra kept her latrine (complete with ceramic toilet over the waste hole) impeccable, as Sandra grew vegetables and medicinal herbs in containers around her home, and as Sandra cooked healthy meals for her family she wasn't exactly setting out to create the best bed and breakfast in the community, as she said, she was "guarding the life of her child."

Sandra's house was one of the gathering places for the women of the community.  This is where we would sometimes have cooking lessons.  Try as she might, Sandra never could teach any of us northern girls how to spin and flatten tortillas in the crooks of our thumbs and forefingers.  "No, not pat-pat-pat...spin, spin spin like this," Sandra would laugh.

One time, Sandra made "meat on a stick."  I have no idea what this is called in El Salvador, but we gave it this descriptive name.  First, you make your tortillas.  If you can't spin them, pat them.  Keep them a little bit thicker than usual.  Set them aside.  Chop up a carrot, some onion, and some tomato (only the fleshy part) into really tiny pieces.  Don't chop like an iron chef, but take your time to cut each tiny piece one by one.  Take some ground meat.  Sometimes in El Salvador it is best not to ask what kind of meat it is, but beef might be a good option.  (If you use turkey or a mixture, just add more seasonings.)  Add salt and some mysterious leaves and twigs which you pick from the garden and chop.  Fresh rosemary and oregano would be close to accurate, but probably any savory herbs you like would work.  Add the chopped stuff, herbs, and an egg to the meat.  Take your tortillas and cut them into strips about 3/4 inch wide.  Mix the meat stuff with your hands until well-mixed.  Form a meatball around the center of each tortilla strip, leaving the ends of the strip poking out of the meat (about 1 inch on each side).  Fry in hot oil until the tortilla ends are golden brown and the meat is cooked through.

Of course meat on a stick is best served with rice.  One time, we asked Sandra what her secret she had for making such delicious rice.  She went to her cupboard and pulled out a box, "Rice-a-Roni," she laughed.  "Seriously?" we wanted to know.  "Yes, the secret is out!" she exclaimed, but of course she added regular rice, and consume de pollo, and her own touches to make a big batch ... 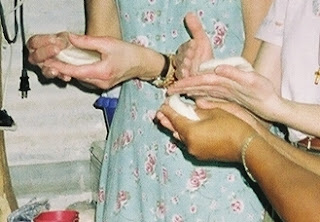 I have lots of fond memories of spending time with Sandra and her family, and have written a couple of stories previously:  A Rain Story and Lessons with the Kids.  Sandra and her husband continue to guard the life of their son, and the lives of their other children.  To escape the violence of the neighborhood, they have relocated to another place in El Salvador.

Author's note:  I was thinking about the moment in which we learned the secret to the tasty rice as I was walking up a steep hill today in San Francisco.
Culture Delegations food Humor Kids Relationships