Off the Beaten Path: Refuge in the Cathedral of San Vicente 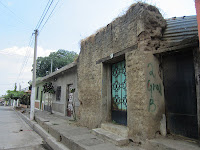 Our church-hopping strategy had worked well in the morning, so with our stomachs filled with delicious relleno de ejote (green beans surrounded by cheese, dipped in egg and deep-fried) and armed with fresh water to ward off the heat of the afternoon, we set out down the hill, in search of the oldest church in San Vicente. 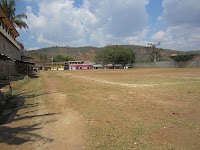 We walked down a wide, paved street in an area that mostly seemed residential.  We thought it would be easy to continue our church-navigation strategy, but on the low, flat terrain we could not see much beyond the houses and trees beside us.  The paving cobbles ended, and we found ourselves at the edge of town on a dirt road, so we turned around and took a side street which ended up leading us to a soccer field.  We went through the gate and walked along the edge by the "bleachers" (well-worn and faded boards set on random cans and buckets) until we came to the other side.  Apparently the end of the soccer field also functions as an informal trash dump.  We quickly toured the dump and emerged on a very tidy, quiet street with colorful homes and beautiful flowers. 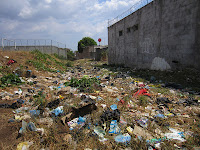 The unexpected site of a couple of strolling gringas interrupted the daily life of sweeping, tending grandchildren, selling frozen ice and standing by pick-up trucks.  When the street came to a dead end, a friendly neighbor said it was OK to go on through the dark and tiny pathway to the next colonia or neighborhood.  These small "neutral zones" between colonias are somewhat neglected.  As we crossed a ditch surrounded by trees Deb said, "I think this is one of those places your husband would tell us not to go."  No worries:  the only people we met along the path were a couple of high-school sweethearts.  Apparently we had stumbled upon the second make-out spot in town (the first being the stairwells of the clock tower).

We took a right on the next street, and it was HOT in the sun.  A few blocks later we came to a church and a park.  An elderly man in a wheelchair sat by the fence.  He really wanted to talk with us so we asked him about the Church of Our Lady of El Pilar - the oldest church in San Vicente.  He had a lot to say, but we could not understand anything except "Jesus."  As we reached through the fence to shake the man's hand and thank him, we realized that he had no legs.  We expressed our gratitude for his story and guidance, and gave him a little money in payment for his help.  We walked toward a nearby shady street and suddenly, there it was:  the church dedicated to the Virgin of El Pilar! 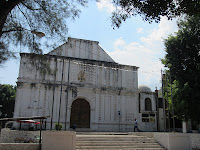 The church was completed in 1769.  It suffered severe damage during the 2001 earthquakes, and the congregation has built a simple and modern church next to the historic structure.  A local legend tells of the history of the church:  A woman named Manuela wanted to kill her husband by stabbing him while he slept. Her husband, Merino, had a painting of the Virgin of Pilar hanging above his bead. As she was about to strike, the painting in it's frame moved and banged against the wall repeatedly.  Merino woke up and his wife did not carry out her plan.  Instead, she went to confession and was told to admit her sin to her husband.  He accepted the whole incident as a miracle, and decided to build a chapel dedicated to the Virgin of El Pilar.

The current state of the old church is a little sad.  Perhaps the church was bright, decorated, filled with art at one time.  The whitewashed walls and empty echo of the sanctuary seems a little ghost-like.  Yet, as we explored the new church and read the flyers up on the walls, it was clear that the congregation is lively and busy and filled with children...and that's really what is important.

We meandered back to the park where our tour began, with a plan to sit on a bench and write in our journals.  We had not been seated for too long, when a gentleman came and sat beside me.  Park benches are certainly big enough for three people, but not when one of the people is somewhat creepy.  He tried to talk to us, but we pretended we didn't understand and just kept writing.  That did not work.  I explained that our pastor was close by and we were workers in the church.  That did not deter him.  We made our excuses and hustled ourselves into the Cathedral where our day had begun.  Safely in God's house, we spent the next twenty minutes writing before venturing out, and, finding that the bench guy was nowhere to be seen, we crossed the park and made it straight away to the ice cream store.  We sat on the tall curb by the town square, enjoying our ice cream and the last moments of our adventurous day in San Vicente.


Culture Off the Beaten Path