June 07, 2013
I am sure you have all been sitting on the edge of your seats, awaiting the next installment of the San Vicente escapades...and I apologize for the long absence.  The last few months have been filled with travel and events at home, so I have not found time enough to write for the blog.  No worries -- I have been keeping up with my hand-written travel journals, so the stories are not lost!  Today's tale is not exactly based in El Salvador, but its theme will ring true for all of you who have been invited into Salvadoran homes.

We woke up early, determined to find breakfast before going to mass at the basilica.  We had laid out our "nice clothes" the night before, and had mapped out possible food locations on our little guide book map.  We were very proud of ourselves as we trudged up the long hill from our hostel toward the basilica, with our clean hair, cute outfits, and hungry tummies.

The basilica in Quito, Ecuador, was built in the late 1920's.  It's old Gothic style would have one think it was built centuries ago.  It is a magnificent ediface no matter when it was built, and my niece and I had spent several hours earlier in the week studying its interior and climbing stairs and steep ladders to capture magnificent views of the sprawling city and nearby mountains.  We had decided then to come back for mass on Sunday morning.  We wondered what it would be like to worship in a place with mammoth darkness and echos, condors instead of gargoyles, and a changing-color-neon-lit portrait of The Sacred Heart of Jesus over the altar.

Quito is hilly.  Beyond hilly.  It is a mountain city, and the altitude adds to the fun of working those leg muscles while carrying a backpack full of stuff or wearing cute outfits.  We were already sweaty by the time we made it up to the main street near the basilica, and we had yet to encounter an open cafe or bakery or restaurant.  We walked toward Old Town, knowing that the steep trek downhill would have later consequences.  We wandered off the map, and then decided to go down yet another hill to get back onto the grid. 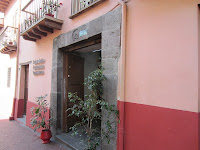 We finally arrived at a place with Restaurante Vegetariano posted outside of wide open doors.  We peered inside, but the place seemed  really quiet.   A young man appeared.  "Do you serve breakfasts here?" we asked.

"Well," he paused, "We have chocolate cake."  We must have looked at him quite quizzically.  "Or granola and yogurt.  Is that OK?"

We said yes and the young man invited us to sit down.  Quiet music became a little bit louder, and a few other people hustled about, apparently doing their morning chores.  The man and a friend unlocked a door to a space marked "fair trade market."  They rummaged about and emerged with two bowls full of granola.  "It's homemade..." the young man said almost apologetically.  "That's fantastic," we responded.  Two cups of lumpy homemade yogurt came out from the kitchen, and a big covered ceramic pot full of brown sugar.  "Maybe you would like some cut up fruit?" the man asked.  "Oh, thank you," we gushed.

We looked around.  We were seated at simple wooden chairs at a simple wooden table in a courtyard of a building which probably had origins in the 1600's.  Images of Hindu deities and a carved plaque honoring the local guru were mounted around the wooden railing of the upper balcony.  Sounds of drums and other rhythm instruments accompanied the music as a yoga class began upstairs.  It was the first time either one of us had been to an ashram.

We ate our breakfast, feeling like we had walked into someone's home as the morning routine was just getting started and realizing that we had received a great gift of hospitality.  Our hosts sat at a long table behind us, laughing and finishing up their breakfasts.  "I feel like they are sitting at the 'cool table'," my niece said.  It did feel a little bit like we were missing out on something.

We stacked our dishes and asked what we could pay.  The young man smiled and said, "Six dollars would be good."  He invited us to join the yoga class, but, with our cute outfits we were not really dressed for yoga.  We gave big smiles and as much thanks as we could, and then ventured out for some serious fast hill-climbing so we could get to mass on time.

We slipped into a pew at the rear of a small crowd as a contemporary song group played and sang along with a CD.  It was loud and not exactly in tune - a pretty stark contrast in style to the breakfast music which was still singing in our ears.  Soon we realized that 8:00 am mass was just ending (a little late) and we were more than on time for the 9:00 am mass.  This is something I appreciated in Ecuador as I always do in El Salvador - grace in time.

Although I have been Lutheran all my life, I have also spent significant time worshiping and studying in the Roman Catholic Church.  We have a lot of shared theology, liturgy and music, and mass at the basilica in Quito felt a lot like worship in a Salvadoran Lutheran Church.  For Pentecost Sunday there were fewer bells and whistles than I might have expected, but the little congregation in that great big space created a warm and welcoming atmosphere.  They smiled and shook our hands when we passed the peace, maybe just a little curious about who these two gringas were in their midst.

An hour later, as we were sitting on a bus heading out to Mitad del Mundo (a monument at the almost-zero-degree latitude point), we marveled at the hospitality we had received that morning.  The experience was repeated over and over again, from the warm welcome of my niece's host family as they cooked a lovely meal for the two of us to the guy in a delivery truck who gave us a ride when we were in search of a bus.  We were welcomed and gifted by the kindness of strangers at every turn.

Sometimes we tend focus on the dangers and the troubles in places like San Salvador or Chiapas or Quito.  Of course we never want to be foolish when we travel because dangers are real.  Yet, hospitality and kindness are so much more prevalent than danger.  Life is so much more joyful when we look at each other and our communities with less suspicion and more love.

I am very grateful to my niece, who invited me to travel with her as she concluded her time studying for a semester at a university outside of Quito.  We had some fantastic adventures, ate some amazing food and learned a great deal about Ecuadorian history and culture.
.