August 29, 2013
The quinceañeara celebration processed from the church to the community center.  There are no words to describe how unbelievably hot it was in that building.  It was like being in an oven, so hot that we could hardly breathe.  Yet spirits were high and so was the volume of the music!  Everyone posed for photos with everyone, and then it was time for the special dance.  We couldn't quite catch all of the words, but the song was a traditional quinceañera song, and all the belles of the ball with their escorts took to the floor.  This dance was rehearsed!  The girls twirled from boy to boy with their big skirts swishing and swaying -- it was like watching a Disney princess movie.

After the dance a series of tables were set up end to end and covered with white cloth.  It was time for the feast of chicken and rice and tortillas.  As we finished eating, a hip hop dance group from the community performed.  The photo-taking continued for a while and then families said their farewells and headed home.

A few photos could not be taken.  Although they had been planning for months, a few mothers could not come.  Although they had looked forward to wearing fancy clothes and dancing, a few boys and girls had to stay home.  An edict from the gang bosses was issued and it prevented these families from crossing over their pathway to the area by the church -- a pathway which is an invisible boundary chopping off one section of the community from the rest, dictating who can walk where, who can play on what soccer field, who can go to what school, and now, who can and cannot go to church.

There are reasons why such an intimidation tactic might be used.  There are rules.  There are suspicions,  And bosses from outside the community don't know the history or understand the sanctity of the holy ground at the top of the hill.  Whatever the reasons, guided or misguided, the edict was issued and people were sad. 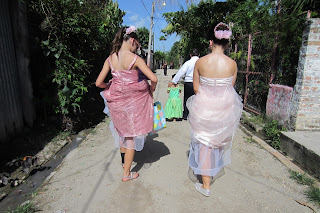 Yet the quinceañeara princesses were undeterred.  "Is it OK for us to walk down there?" they asked.  So the quinceañeara princesses hiked up their skirts and navigated their way through the barbed wire short-cut and took the party to the other side of the invisible boundary.  Not everybody could go, but we could go.  One of the mothers was home.  She invited us into her yard.  Beneath her humble tree (as she called it) we shared the fruits of her garden.  We all tasted sunsa (a sweet orange fleshy fruit which reminded us a little bit of sweet potato).  Then she made green mango with chile.  A neighbor mom came over with her son.  She had also been ordered not to walk up the hill.  We spent a good long time relaxing and enjoying the fruits until the thunder rumbled and it was time to go.

"It wasn't the same as being at the party with everyone," the moms said, "but this way we got to have you all to ourselves in our own garden." We shared lots of hugs and thank-yous, and then those of us who were allowed to do so walked back up the hill.