August 25, 2013
The day for the anniversary celebration had arrived!  We arrived in the community before 7:30 AM so that our two quinceañera princesses could get their hair done by the expert fancy hair stylist in the community.  They spent a couple of hours getting their curled and sprayed up-do's and then changing into sparkly pink and poofy dresses.  All over the community, girls were donning their pink and pastel-colored dresses -- dresses which had attended proms and weddings ten, twenty or thirty years ago, dresses which had traveled to El Salvador a month before the celebration, dresses now expertly re-fashioned to turn excited teen girls into beautiful flowers.  As the girls giggled and fussed with their hair and dresses, teen boys polished their black school shoes and walked around nervously in black dress pants and white or pink button-down shirts.

Adults hovered around the church, adding finishing touches.  A few days earlier, the church had been dressed in a fresh coat of lilac paint, and the new fence around it was decorated with streamers and balloons of every color. The archway was crowned with a tiara of green palm branches. Pale pink and pale green lace curtains draped from the rafters.  The women had sewn pink covers for the altar, the pulpit and the communion elements.  Silk flowers, pink ribbons and baby blue balloons were everywhere. 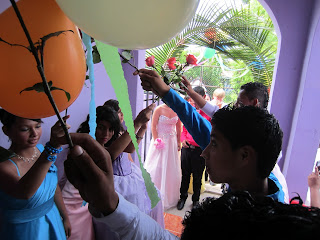 Fifteen girls accompanied by fifteen boys represented the fifteen years of our partnership as sister churches.  These youth were chosen and honored as the once little ones who have grown in years and wisdom as the sister churches have grown together in love and ministry.  When the music started, the young couples walked in slowly and lined the center aisle of the church, making an archway with their arms and holding long-stem roses in the air.  Little girls dressed in bright green dresses tip-toed beneath the arch, dropping flower petals along the way.  They were the "little leaves."  Two little ones in white dresses walked behind the leaves - they were "the snow."  The maids of honor were dressed in matching yellow gowns.  Then the quinceañera princesses walked in with their escorts, carrying pretty pink bouquets.  The archway of couples then ducked under and walked forward, one by one, until everyone was seated for worship.  The princesses ended up shyly sitting in chairs at the base of the altar, facing the crowd.

The worship service was filled with special moments, with heartfelt words and the presentation of gifts.  Roses were presented one by one to the quinceañeras, fifteen roses to each, and then representatives of our two churches put their hands together to receive the roses as one bouquet, symbolizing the coming together of two congregations into one.  During the offering, youth brought gifts forward - light (a glittery hot pink pillar candle which survived the flight and the heat, education (a children's book) and hermandad/partnership (a giant hand-made anniversary card signed by kids, youth and adults from our home church).

After worship, everyone processed down the dusty path to the community center...