October 04, 2013
"Be sure to have a cake.  Usually there is a cake.  We couldn't afford a cake, and we were a little bit sad about that, but it was OK, right?  The cake should have layers and be tall and pretty like a wedding cake."

We had a cake.  And balloons, lots of balloons.  And streamers and pink tablecloths and pink sparkly stuff and a princess in a pink dress and pink lemonade.

From the beginning, we had planned two quinceañera celebrations to honor our fifteen years together as sister churches:  one in El Salvador and one in the US.  Even though we were sad to say good-bye to our Salvadoran friends at the end of our time with them, we had some fun together planning for the party "in the north."  We probably would not have dancing.  We would decorate using colorful balloons and streamers just like the Salvadorans had done.  And there would be cake. 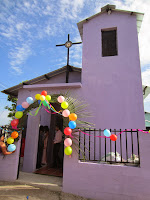 The party in El Salvador was planned by the community, and we had sent some funds ahead of time so our friends could plan the kind of party they wanted.  When they met to make their plans, they decided to use the funds to give a party to the church!  They painted the exterior of the church so it would look just like it did in 2011 when it was born - a beautiful, soft purple.  They also built a low wall and fashioned a black metal fence and gate around the church to protect it from the occasional delivery truck or mischief.  When we arrived, the community showed us the fifteenth anniversary gift they had given to the church.  They hoped we were in agreement with their choices for the use of the money.  We absolutely were, absolutely.  We were also tremendously impressed with how much work they were able to do with a little bit of party money!

So, at the Salvadoran fiesta we each ate one piece of chicken instead of two, and we cut no cake and broke no piñata.  We laughed and danced and shared lots of warm and lovely hugs.  The cake, beautiful with layers like a wedding cake, would be served up north.

And so it was.  We had a great big up north party with all of our congregation invited.  We ate cheese pupusas and sweet tamales with cream.  We shared photos from the celebration in El Salvador, and told stories.  The quinceañera princess cut the cake and little ones marveled at her sparkly dress. Finally, we hoisted the piñata over a tree branch in the church yard and children took their swings.  One good whack and candy spilled over the ground.  The party was over.

Fifteen years as sister churches.  Fifteen years of growing and learning together.  We think about the little ones who broke open piñatas in the early years and are now grown - some with children of their own.  We look forward to the next fifteen years, hoping our children and grandchildren will continue to grow in faith and love together, sharing wisdom, hopes, dreams, joys, sorrows, and fun. 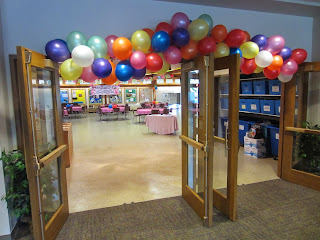 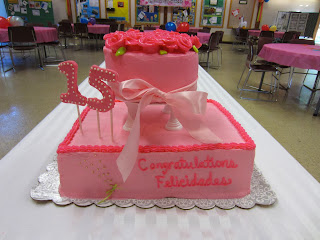 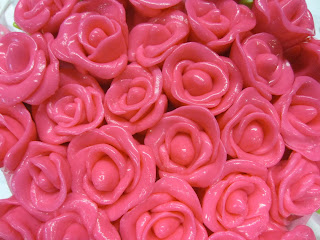 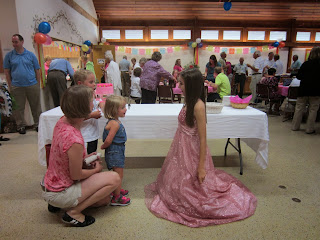 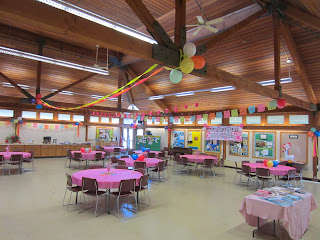