We walked up the street toward San Jose de La Montaña Church, happy to have been in the throng, and happy to emerge from it.  Our mission:  to find a place to eat lunch, preferably a spot with some seating.  We made up the hill, glad to see a few sidewalk cafés opportunistically set up just beyond the church.  The delicious scent of carne asada and an empty table with a few chairs were all the encouragement we needed to hustle ourselves over to that table.  We peeked over at the grill, and the meat looked as appetizing as it smelled.  We scooted our chairs to the table to the sound of shrieks and laughter.  To our great surprise, friends from Rutilio Grande were eating lunch at the table beside us!  We jumped up and shared hugs and kisses, marveling at the coincidence.  Weeks before the Romero beatification ceremony, we had communicated with these same friends and figured it would be nearly impossible to connect with one another in the midst of the huge crowd. 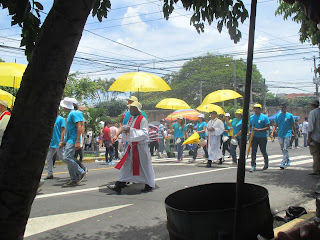 We chatted with our friends, enjoyed our delicious lunch and watched as the Holy Communion distribution teams walked by.  Each team consisted of a white-robed priest carrying a white gift bag (presumably the sacrament was inside the bag), and a small team of volunteers wearing turquoise t-shirts, one of whom carried a big yellow umbrella.  Each distribution team had been pre-assigned to a designated location, and the process of bringing the sacrament to the people seemed to be taking a while.   We had seen the first teams moving out to their spots as we began our walk away from the crowd.  In fact, we passed by as an old woman held out her hands for communion, but the priest told her he was not in his spot yet so she had to wait.  That seemed a little bit wrong to us.  As we sat eating our lunch, an older priest interrupted his walk a couple of times to hand out communion to old women in aprons and some teen guys.  "He is from the older generation," the pastor who was with us said, "He gets it."   We nodded. 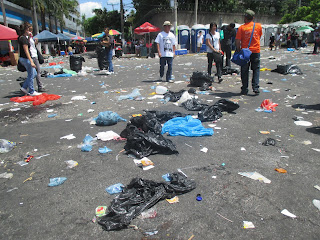 After lunch we decided to walk back to the center of things to see what we could see.  Barricades were still set up, but we could walk easily walk around the Salvador del Mundo monument.  The streets were littered with all kinds of trash, not surprising given the size of the crowd and overflowing garbage barrels.  Entrepreneurs carrying large bags picked water bottles and other recyclables up from the gutters and trash cans.  We ran into Bishop Gomez and his wife, and a few other familiar folks along the way.  Eventually we made our way back up the big hill via the same street we had walked hours earlier.  The vendors for the most part had packed up their Romero posters, candles and other souvenirs.  We stopped to use the portable toilets two-thirds of the way up the hill.  They were clean, which indicated to us that the crowd probably did not make it up to that point.  We stopped for ice cream and then called it a day. 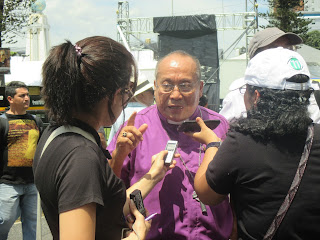